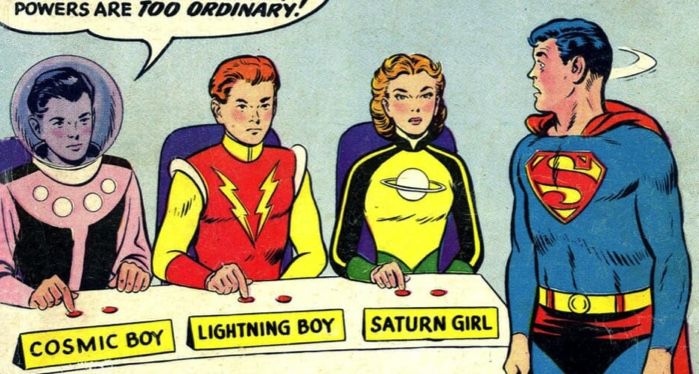 The future is a blank slate, an uncrossable void into which we pour our hopes and dreams…unless, of course, Larry from down the street invents a machine that sends you and your superbuddies bouncing around the timestream.

Since I’ve already covered examples of superheroes getting thrown into the past, I figured it was only fair to also tweak the noses of the poor saps who went in the opposite direction and caught an illicit sneak preview of coming events. Often, the way a superhero interacts with their descendants (or their older selves) is indicative of their integrity as heroes and decency as human beings…in which case, a lot of these heroes aren’t as upstanding as we all thought!

All-Star Comics #10 has our heroes of the Justice Society travel 500 years into the future in search of a formula that will protect all of America from aerial bomb attacks. This makes sense when you remember this was published during World War II. Well, sort of. In a nonsensical way.

With no remorse whatsoever, the Society proceeds to beat up, bamboozle, and otherwise abuse almost everyone they come into contact with. Naturally, they succeed in their mission — the fact that the future was not overrun by Nazis should have told them that — but they don’t come out of this adventure smelling very rosy.

Reverse Time (and Then Change the Future)

The Avengers outdid everyone on this list by not only traveling to the future but also to another dimension while they were at it! While on their way home from a mission, the Scarlet Witch, Quicksilver, Goliath, and the Vision end up several days in the future, when the whole (alternate) planet is being baked alive by a super-heated sun.

After the Scarlet Witch takes them back to their proper time (but not their proper universe), the team scrambles to identify the cause of the looming disaster. Turns out it’s *checks notes* a disgruntled child genius who is sick of being treated like a freak and decides to orchestrate the most elaborate murder-suicide ever. Look, the early ’70s were weird for everybody.

Get Elected to High Office

In a Mad Libs–style plot from Green Lantern #8, Hal Jordan is pulled into the 58th century. Why? Humanity is under threat from a race of giant gila monsters with laser vision, so they decide to pluck GL out of his own time, make him Solar Director, and task him with defeating the lizards.

Hal, his memory wiped by the time travel, readily agrees to go to war against the gila monsters. After he defeats them, the future people send him back home with another dose of amnesia, a drained power ring, and the implication/threat that they may toy with him again some day. (And then they do.)

Hang Out for a While

The most prominent recent example of heroes being thrown into the future is probably the time-displaced original X-Men. At the behest of a future version of one of their own, they travel to the future and are duly horrified by all of the nonsense the X-Men have been subjected to in the intervening years.

After a whole lot more nonsense — including Young Iceman being shoved out of the closet, everyone thinking they couldn’t go home again, and then everyone realizing they could go home again after all — the original X-Men returned to their own time.

Superboy is minding his business in Adventure Comics #247 when three heroes from the future appear in Smallville for no apparent reason beyond messing with him. After making him believe his secret identity had been exposed, they invite him to the 30th century to join their team: the Legion of Super-Heroes!

To get into the Legion, Superboy must pass three tests. He does not pass any of them, as he is continually distracted by other emergencies. The Legion teases him mercilessly, even driving him to tears, before admitting that they themselves orchestrated the distracting emergencies, thus risking countless lives for a gag. I guess future heroes can be just as douchey as our present-day heroes.

For some reason, Superboy agrees to join the Legion anyway.