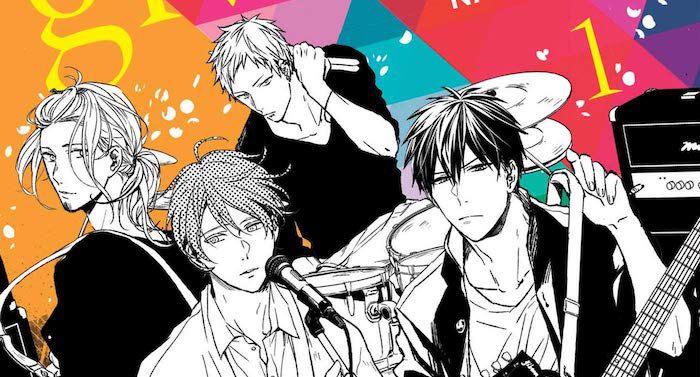 The North American manga market has gone through many ups and downs over the last 20 years, but it’s safe to say we’re in an upswing. How can we tell? Series like My Hero Academia and Demon Slayer dominate the graphic novel bestseller lists. Readers can access their favorite titles in a variety of formats, including print, digital, and even via online apps. And most important of all, multiple publishers license and release all types of manga, ranging from big action-packed blockbusters to quieter, critically acclaimed darlings to BL manga, as we’ll cover in this post.

Today, English-language manga readers get to enjoy publisher catalogs that have both breadth and depth. One of my favorite things about that is the number of queer-themed manga being released. In the last five years alone, we’ve seen the release of excellent titles like My Lesbian Experience with Loneliness, My Brother’s Husband, and Our Dreams at Dusk. Two decades ago, I never would have predicted the release of a series like Blue Flag, a shonen romance where the love quadrangle features queer pairings in addition to the heterosexual ones. But despite the increased visibility of titles about the queer experience, the truth is we’ve always had manga with queer content — namely yuri and BL manga.

What Is BL Manga?

In a nutshell, boys’ love, or BL, manga features romantic relationships between men. Like any other manga category, these stories can range from realistic dramas to intense, over-the-top fantasies. Like any story from the romance genre, some can be cute and sweet while others can be spicy and explicit. Whatever your reading preferences, you can find a BL title to suit your tastes.

The important thing to keep in mind, however, is that traditionally, boys’ love manga is created by heterosexual women for heterosexual female readers. There are discussions to be had about the problematic aspects of that dynamic. There are also more discussions to be had about the accuracy of the perceived identities of both BL creators and readers today. Those are conversations for another day. It’s best to approach the boys’ love category as a romance genre that promises escapism versus a realistic exploration of the queer experience. Not saying that BL manga can’t have the latter, but it’s not a requirement so don’t go in expecting it.

A Quick Look at BL Terminology

Boys’ love originated from the shojo genre, which is why it’s traditionally viewed as a category where both the creators and readers are heterosexual women. That’s shojo manga’s target demographic, after all. Over time, however, this new sub-genre would garner different labels — some of which you may have heard in common usage if you’re a longtime manga reader.

Shonen ai: Although this term translates to “boy love,” its general usage is deprecated because it’s historically associated with pedophilia. No thanks. In the context of manga, early shojo works bearing this label typically meant romances between beautiful boys. We’ll ignore the fact that many of these formative works ended in tragedy, but people well-versed with queer narratives probably won’t be too shocked by this revelation. Sadly, some things remain the same no matter the culture.

Tanbi: Like shonen ai, manga bearing this label also focused on beautiful aesthetics. It typically featured relationships between older men and younger lovers. If you’re a fan of The Untamed, you’ve likely heard of the term danmei — the Chinese genre of romances between men. Fun fact: danmei is the Chinese transliteration of tanbi.

June: June was the name of a now-defunct manga magazine that serialized boys’ love titles. The magazine’s name became synonymous with BL manga that featured art styles reminiscent of series published within its pages. Can you imagine being so visible that people called entire swaths of manga the name of your magazine because the art looked similar?

Yaoi: This is likely the most well-known synonym for boys’ love manga. Yaoi is an acronym for “yama nashi, ochi nashi, imi nashi,” which translates to “no climax, no point, no meaning.” It originated from doujinshi circles — doujinshi being amateur, self-published and fan comics in Japan — and refers to the fact that many early BL works focused on sex to the exclusive of anything else, including characterization and plot.

In case you’re wondering how the “boys’ love” label came into being, just look at the number of terms that refer to what essentially is the same thing. BL, as a category label, collects all these works under one umbrella.

Two other terms that will be useful to know when it comes to boys’ love manga:

Seme: The top and the pursuer in the relationship.

Uke: The bottom and the pursued in the relationship.

The strict codification of sexual and relationship roles in BL series is one of the things most often criticized by English-language readers. To be honest, the depictions in boys’ love manga can be problematic at times. Something to keep in mind as you delve into BL manga and see the kinds of relationships being portrayed. They’re not all problematic in this specific way, but some are.

The tricky thing about boys’ love manga is that many of the foundational works have never been licensed in English. If they have been, they’ve fallen out of print. Searching for these classic BL manga online will reveal used copies going for hundreds of dollars. So instead, here are two modern classics that are more accessible and affordable. 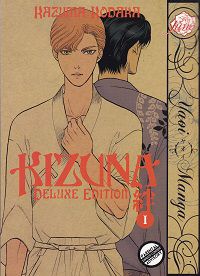 Kazuma Kodaka is one of the pioneers of the modern BL genre, and Kizuna is perhaps her most well-known work. The series begins with Enjouji, who met and fell in love with Ranmaru while they were in school together. The complication? Enjouji is the illegitimate son of a yakuza boss and has a younger half-brother named Kai who likes to cause trouble. Throw in Kai’s older protector, Masanori, and we have complicated relationship dynamics — familial, romantic, and platonic. 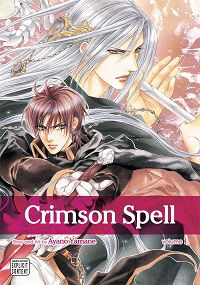 While Amane’s most famous work is Finder, I chose to feature this one instead because it doesn’t take place in the world of organized crime. Read a lot of BL series and you’ll notice that specific setting pops up again and again. Crimson Spell is a fantasy series that follows Vald, a cursed prince who turns into a raging demon at night. He seeks help from a powerful sorcerer, but the methods the other man uses to subdue the demon are…questionable. 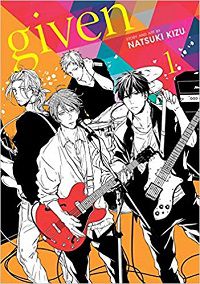 Given by Natsuki Kizu

One of the best BL manga available today, Given is the series to read if you love well-done relationships and music. It begins with Uenoyama, a bored high school student whose only passion is playing guitar. But his boredom with life is shaken to its core when he meets the quiet, eccentric Mafuyu, who has a golden voice. Watch out though! While Uenoyama and Mafuyu is the couple that gets you into the series, Akihiko and Haruki is the pair that will destroy you. 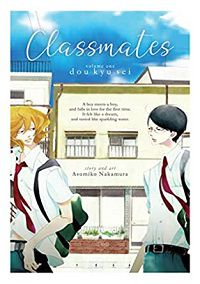 Maybe you don’t like intense series. Here’s one for you. Classmates is a sweet, cute BL manga about Rihito, a quiet high school student, and Hikaru, the classmate who agrees to tutor Rihito in music. Don’t expect drama in this manga. Just watch this wholesome couple fall in love and navigate school and life together.

Continuing the music theme, let’s hop over to the world of ballroom dance. In one corner, we have Shinya Sugiki, the king of standard ballroom. In the other corner, we have Shinya Suzuki, the king of Latin ballroom. They may be rivals, but they must put aside their differences if they want to compete in the 10-Dance Competition. After all, if you want to be the best, you need to learn from the best. I recommend this one for fans of Yuri on Ice. 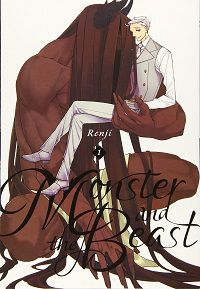 Monster and Beast by Renji

If you’re looking for something a little different in your BL, give this take on the classic Beauty and the Beast trope a try. Cavo is a lonely monster with a gentle and innocent soul. Liam may have a handsome face, but he’s a selfish beast at heart. The two cross paths when Cavo saves Liam’s life, and Liam shocks Cavo by not being afraid of him. A good one to read if you want to see older characters too! 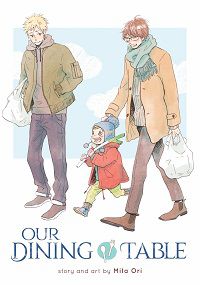 Our Dining Table by Mita Ori

This cozy read follows Yutaka, a salaryman with a talent for cooking. After he meets a pair of brothers, he begins to teach them how to prepare delicious meals. They even start sharing those meals together — something which Yutaka has never enjoyed doing before. Readers who love to cook, and love sharing the dishes they’ve prepared with their loved ones, will find a lot to like here. 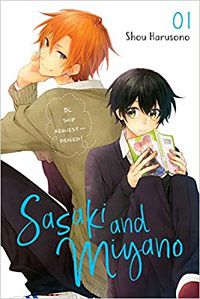 Sasaki and Miyano by You Harusono

Tell me if you’ve heard this one before. A bad boy upperclassman meets his cute junior and begins to pursue them romantically. Sounds familiar, right? Except in this manga, the underclassman is a big fan of boys’ love manga and the lovestruck upperclassman uses this hobby as a way to get closer to his crush. The irony here is that while said underclassman is a BL expert, he doesn’t quite realize he’s actually being romanced by his new “friend.”

No Touching at All by Kou Yoneda

I’ve said it before, and I’ll say it again. Kou Yoneda is a very underrated BL creator. Her stories feature adult characters. Reading her work is like reading a contemporary novel with a realistic tone. A lot of her titles do feature the ever-popular setting of organized crime, but this manga features two co-workers — an office employee and his new boss. Salarymen and office romances are common fixtures in BL series, so I wanted to make sure to include one example. 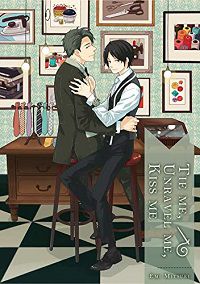 Tie Me, Unravel Me, Kiss Me by Emi Mitsuki

While people pick up boys’ love manga to read romances, sometimes it’s nice to find a title that has a romance intertwined with something else too. Tsukasa has always planned to take over the family tailor shop. But now that he finally has, troubles strikes. A construction company plans to demolish the shopping district where the shop is located. Even worse, the project is headed by his childhood friend. And even more terrible, their other mutual childhood friend has been given the task of “encouraging” the shopping district’s tenants to leave. Despite the premise, there isn’t really a true love triangle here, but you might be surprised by the endgame couple here.

And that concludes this introduction to BL manga. Novel adaptations of boys’ love manga do exist, as well as entirely original light novels, but we’ll leave that for you to discover. Interested in exploring manga beyond the BL category? Here’s a list of best manga to get you started, or you can check out all of our manga coverage.