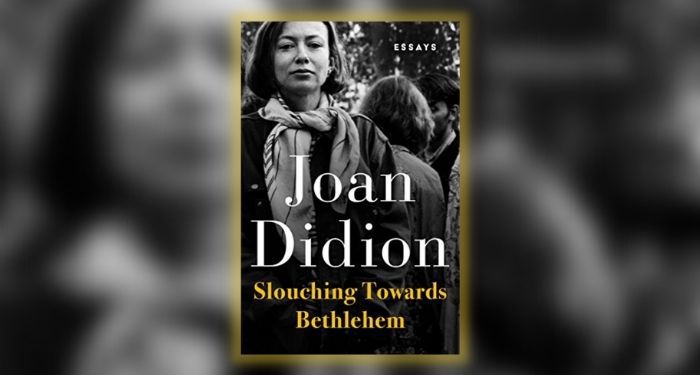 I own three copies of Slouching Towards Bethlehem, three of A Book of Common Prayer, two of Play It as It Lays, and an old first-edition-but-not-first-printing of The White Album that I found in the basement of a bookstore. You might say I have a thing for Joan Didion. There is a cliché of the young writer who is obsessed with Didion for a good reason. I used to wish I’d discovered her in college because I was in grad school before I figured out that you could do that and I felt like I’d been cheated out of even more formative years with her.

I initially wrote “her work,” but it’s never felt like the relationship was just with the work, and I think that’s the difference between a writer and a literary celebrity.

At the same time, I think I found her exactly when I needed to, but in memoir rather than in the essays I would go on to try to emulate. I read The Year of Magical Thinking a few months after my mom died (not suddenly, not at the dinner table, but isn’t it always sudden even if you know it’s going to happen?) and I just remember thinking how right she was. You go through the days after a death thinking that if you can just do this and the next thing it will be over and things can go back to normal. She managed to write about death and the ways we try to process an impossible experience but also about how ridiculous the whole thing is.

In addition to The Year of Magical Thinking (which won the National Book Award for Nonfiction in 2005), Didion was also the author of 11 other works of nonfiction, including her most recent collection, Let Me Tell You What I Mean, which came out in 2021. She was also the author of five novels including Play it As it Lays, A Book of Common Prayer, and The Last Thing He Wanted (which was adapted into a Netflix movie starting Anne Hathaway in 2020). The Year of Magical Thinking was also turned into a one-woman play starring Vanessa Redgrave as Didion.

Didion is associated with the New Journalism movement, which is exemplified in the pieces in which Didion’s response to what she has seen and experienced is part of the story. She rose to prominence writing about the hippies of Haight-Ashbury.  She later stated that “no one had understood” the essay, which was entitled “Slouching Towards Bethlehem,” and that she had never gotten feedback that was “so universally beside the point.” Her writing is known for its precision and she wrote about writing “by ear,” so concerned was she with the rhythm of a piece that she’d put “xxx” in areas of the text she intended to fill in later and so maintain the internal rhythm of the piece.

Joan Didion was born in California in 1934 and spent most of her childhood there, except for a year in which her family traveled to several states in which her father was stationed with the Army Air Corps. She moved to New York City after her graduation from the University of California, Berkeley, and worked at Vogue, where she’d won an essay contest her senior year. She met and married John Gregory Dunne and moved back to California in 1964. “I could not have been with someone who wasn’t a writer, only because that person would not have had any patience with me,” she said of Dunne in the documentary The Center Will Not Hold. They adopted a daughter, Quintana Roo Dunne, in 1966. They were Hollywood fixtures, well-known script doctors and writers of screenplays including The Panic in Needle Park, True Confessions, and the original version of A Star is Born. Didion also adapted Play It as It Lays into a screenplay but was disappointed in the final film.

Didion was known as a great host of dinner parties and their social circle included actors such as Warren Beatty and Harrison Ford, the latter of whom was her carpenter. Writer Eve Babitz, who died the same month Didion did, was also a guest at these notorious dinner parties. Who wouldn’t want an invite?

A famous New Yorker (she and Dunne moved back to Manhattan in 1988), she was simultaneously a Californian, specifically a Sacramentan, who wrote Where I Was From about her childhood. Her pioneer ancestors traveled out to California with the Donner party (but broke with them when they made the fateful decision to take a shortcut). Her piece on leaving New York has become a touchstone for a whole generation of writers who have seen New York “end” for them, when they too have learned that “it is distinctly possible to stay too long at the fair.” There’s even a book named after her essay, Goodby To All That.

In a very unusual move for a writer or indeed for any other glamorous octogenarian, Didion was asked to model for the brand Céline in 2015. When asked about the ad, Didion seemed unsurprised and responded with her trademark coolness. She and Quintana also modeled for Gap in 1989. She was also featured on the consequently extremely popular and also extremely unobtainable LitHub tote bag.  Didion worked at Vogue, so clearly she knew something about personal style in addition to her inimitable prose style, but her author photos truly say it all.

Didion often said that she wrote to find out what she thought about something. She wrote about everything from corruption in Miami to the 2000 presidential election (so, additional corruption) to the history of irrigation in California. She saw people for who they were — she called out the falseness of Al Gore playing catch on the tarmac to seem more relatable to voters. She was the first in the mainstream media to suggest that the Central Park Five were wrongly accused. She wrote about a world that was changing, the “center” of which did not seem, to her, to be the same as it had always been.

Later in life, she became even more well-known for her grief memoirs. John Gregory Dunne died of a massive heart attack in 2003, and their daughter Quintana died less than two years later. Upon the publication of Blue Nights, the book about the loss of her daughter, there was some debate about whether Didion was too much of a writer and not enough of a mother. As Didion herself taught me, we want to believe that the losses of others are somehow deserved, could never happen to us. We make other people into narratives, and Didion wrote honestly about her fear is that is what she had done to her daughter.

Joan Didion was more than a writer, she was indeed a literary celebrity. She didn’t just have readers, she has fans. What makes someone a celebrity? She is inextricable from her work because of the nature of the work itself. She was both deeply neurotic and cool and that, to me, a deeply neurotic but uncool person, made that coolness seem possible someday. This coolness worked both for and against her — she’s been called both “remote” and (repeatedly) “a cool customer” when she didn’t respond to her husband’s death in the way that people who encountered her during that period believed that she should.

I both wanted her to live forever and there was a tiny part of me — the same part that I think Didion herself would laugh at, that thought that it was all right, that she was with John and Quintana now. She processed her life, her thoughts, the very world she lived in through her writing — and that work will live on forever.

If you want to learn more about Joan Didion, there is a Netflix documentary called The Center Will Not Hold by her nephew, Griffin Dunne. (Another interesting fact about Didion is that Dominique Dunne, who was best-known for her role in the Poltergeist franchise, was Didion’s niece.) Not sure where to begin with Didion’s work? You can choose your own Joan Didion adventure.