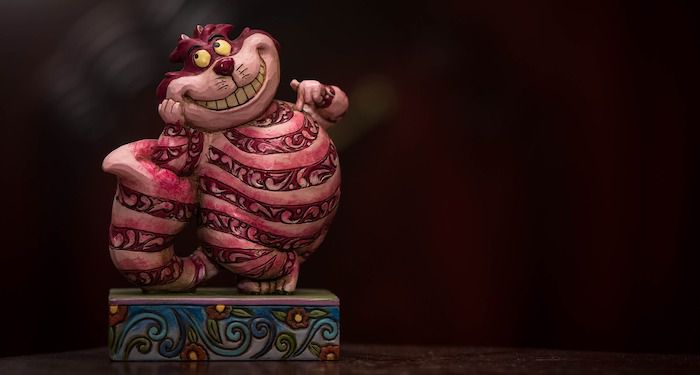 Lewis Carroll Was Jack the Ripper

Yep, I had never heard of this one either, and I read From Hell many times. Is it mentioned in that? It damn well should be, because this is a great conspiracy theory. The idea is that Lewis Carroll (a pen name for Charles Dodgson) sprinkled anagrams throughout his works that admitted his guilt. It’s a huge stretch, and people who claim this to be true have to rearrange Carroll’s work so much that they have to cut the words around to make them fit (see: Jack the Ripper: Light-Hearted Friend), but hey, that’s what conspiracy theorists do, don’t they? Just shove crap in to make things fit their agenda?

I have to admit something: there was a time in my life when I went deep, deep, deep into The Illuminatus! Trilogy by Robert Shea and Robert Anton Wilson, a giant tome of historical conspiracies. I loved it. I don’t even remember where it came from, but it appeared in front of me one day and I was hooked. Buyer beware: this novel burrows into your mind like a doubt-worm and never really leaves you. One of the best conspiracy theories ever imagined lies in this text, that Adam Weishaupt, founder of the Bavarian Illuminati, travelled to the United States, murdered George Washington, assumed his identity and ran the United States as puppet government for the above mentioned Illuminati. The thing is, Weishaupt looks very, very similar to George Washington, which makes the whole thing plausible, right? Right?!

I was handed this novel by a history professor in my first year at university. “I don’t know what this is,” he said, “but I think you’d like it.” I devoured Foucault’s Pendulum. If you haven’t heard of it, it’s about three friends in Milan in 1970. They work in publishing and are reviewing a text about the Templars. The text claims that the Templars had a plan to take over the world. Intrigued by the disappearance of the author of the text, the three begin their own line of conspiracy theories. Using a “home computer”, they create fictional ties to secret societies and even create their own secret society, The Tres, to bind everything together. They call it “The Plan” and become obsessed with their fun little game. But what if they’re right? What if all of these societies are real and are working together to create a new world? This novel is seriously bizarre and unnerving; it’s a masterpiece.

You’ve probably heard the one that Shakespeare didn’t actually write his own plays and that they were actually written by Francis Bacon? Yes, I’ve heard this too. However, I’m including it in here because it’s connected to a cool little nugget of info that hits close to my home, literally. The idea is that Shakespeare wasn’t educated enough to even read, let alone write Midsummer Night’s Dream, so he had Bacon do the work for him. The theory is that Bacon was a famous Rosicrucian cryptologist, and that this secret society used a place called Oak Island as its base. Oak Island is a place steeped in mystery and conspiracy theories, not just literary based, but everything based. And it’s only about an hour from where I grew up in Nova Scotia, Canada, so I have to include as part of Canadian law. Back to the theory: so Bacon has written these amazing plays and decides the safest place for the original manuscript is hundreds of feet down a booby-trapped well three thousand miles across the ocean. Why Bacon decided to do this when copies of the plays were already out there is still a mystery, but I’m sure a conspiracy theorist will be able to make all of the dots fit, because that’s kind of their MO.

I’m sure there are more, tons more out there but these are some of my favourites. I’d love to hear about your favourite literary conspiracy theories! In the meantime, check out 9 of the Best Books About Conspiracy Theories.