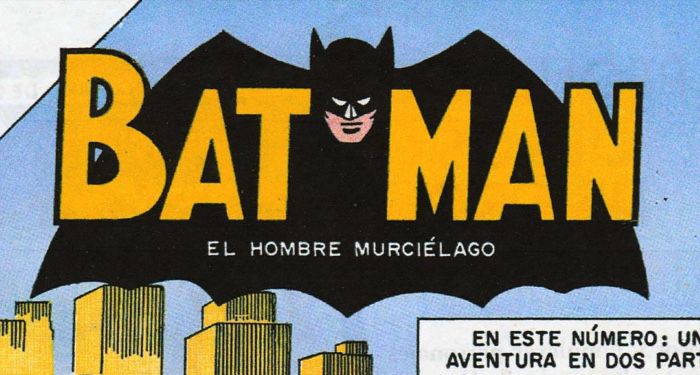 Mid-September is a special time for both the Latinx community and comic book fans. September 15 is Independence Day in Mexico and most Central American countries, and it is the start of National Hispanic Heritage Month in the United States. And the third Saturday of the month is Batman Day! I choose to believe this date was picked because of its proximity to the birthday of Adam West, the greatest Batman of them all, on September 19. If I’m wrong, don’t correct me.

To commemorate all of these auspicious dates, I thought I’d share a few fun facts about the Mexican translations of Batman and other popular superheroes that were published in the 1950s, ’60s, and ’70s. Since I have neither the time nor the money (we’ll get to that last part in a minute) to rush out and buy any of these translations for myself, most of the information here comes from looking at the covers of these comics, as well as from this fantastic SDCC@Home panel. It ran long, and it’s in Spanish, but there are English subtitles and I promise it is worth it if you are at all interested in comic book history.

For those of your short on time, however, this article can provide a quick and dirty look at early Spanish translations of American superhero comics.

Fact #1: Batman Comics Were Not Just About Batman

In America, if you pick up a comic that says “Batman” on it, you expect to get Batman. In Mexico, however, there were times when multiple heroes appeared in Batman comics, from Green Lantern and the Flash to Kamandi and the New Gods.

I assume these books were anthologies and that Batman still appeared in them even when he didn’t get the cover spot. But I could be wrong: maybe Batman needed a vacation once in a while. Let’s hope he didn’t go skiing.

How everyone’s very English names get translated — and if they get translated — is a bit of a crapshoot. Batman himself is generally just called “Batman” within the stories themselves. However, the covers of most issues include the subtitle “el Hombre Murciélago,” the literal translation of his name (Bat Man), just to get the point across.

If you can read the dude’s speech bubble there (or have seen the cover of Detective Comics #194, which is exactly the same), you know that he’s saying he has discovered Batman’s identity is Bruno Díaz. That’s one thing they did change: Bruce Wayne became Bruno Díaz. (I believe he still is: I watched a dubbed version of Batman Forever on television a few years back, and they called him Bruno.)

Bruno must have been a popular name back in the day, because the Flash, AKA Barry Allen, was also apparently renamed Bruno. Seems a little lazy, but okay.

Speaking of lazy, Atom was still the Atom, Flash was still the Flash, and Captain Marvel was simply called “el Capitán Marvel.” And yet, Green Arrow was called “Flecha Verde,” and Wonder Woman was completely rebranded as “Marvila, la mujer maravilla.” Was there some kind of criteria that determined who got translated and who didn’t, or was this the work of different creative teams with different, subjective standards? Oh, to be a fly on those walls…

Fact #3: Superheroes Were Not As Super As You Might Think

In the U.S., we tend to equate comic books with superheroes; you can’t really discuss one without bringing up the other. But in Mexico, historically speaking, superheroes were not the be-all, end-all of comics.

According to Luis Gantus, historian and guest speaker at the panel linked in the intro, superhero comics sold well enough in Mexico in the ’50s and ’60s. However, their appeal was hardly universal: most of their readership consisted of middle-class kids with clean-cut parents who aspired to be “more American.”

So what was the average José reading? Mostly stuff like La Familia Burrón, about a lower-class family whose creative use of language (not even dirty, just creative) sent those clean-cut parents into a tizzy, and El Santo, about a do-gooding luchador. (Fans of Mystery Science Theater 3000 will recognize him from that jewel of mid-century cinema, Samson vs. the Vampire Women.)

Fact #4: Gwen Stacy Is Alive and Well in Mexico

If you want to read Mexican Batman comics for yourself, you can find some for fairly reasonable prices on eBay: I found some for about 15 or 20 bucks. Then there are others going for a hundred dollars are more. A bit high, but not out of the realm of possibility. It would appear that Mexican Batman is popular enough to be worth something, but not so popular or rare that people are willing to break the bank over it.

Not so with Mexican Spider-Man.

Due to behind-the-scenes publisher shenanigans, Amazing Spider-Man #121 was not released in Mexico. A few years later, a new publisher came along and started printing their own, original Spidey stories (with Marvel’s permission) along with reprints. The most infamous of the original stories features Gwen not only alive, but about to marry Peter Parker!

(Yes, their names are still Gwen and Peter. I checked.)

If you’d like to read these original Mexican Spider-Man adventures, I wish you good luck and deep pockets. Most of them have been snapped up by foreign (that is, non-Mexican) collectors, and as of this writing, the wedding issue was selling for $15,000 on eBay. Better mortgage the Batcave for that one!

Want more bizarre Bat-adventures? Check out my articles on Batman’s idea of a good Fourth of July and good parenting!