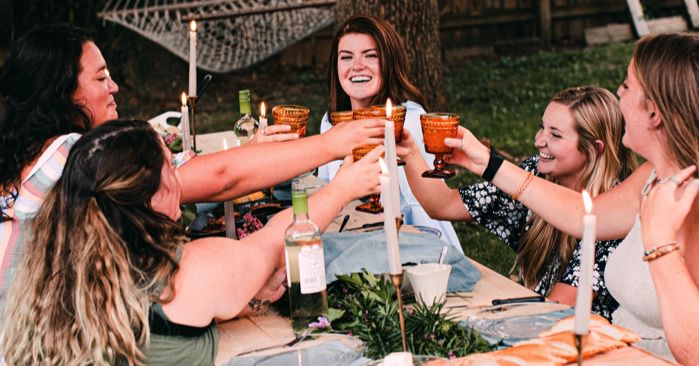 Studies have shown that loneliness can be detrimental to health. Back in 2017, the Telegraph UK reported, “Researchers in the U.S. looked at 218 studies into the health effects of social isolation and loneliness involving nearly four million people. They discovered that lonely people had a 50 per cent increased risk of early death, compared to those with good social connections. In contrast, obesity raises the chance of dying before the age of 70 by around 30 per cent.”

Friends and family are important to our wellbeing. However, there are a plethora of poems about family members so I decided to focus on the harder task: poems about friendship. I’ve compiled a list of 20 friendship poems in honor of those people who keep the loneliness away. These poems come from a variety of eras and viewpoints and include themes of friends lost, friends to the world, and also bad friends. This list is by no means exhaustive; it’s a list of poems that I liked that brought out different aspects of friendship.

Some friendship poems are longer than others, so I included the first few lines but you’ll have to go to the link to read the rest of the poem.

Having a Coke with You by Frank O’Hara

“is even more fun than going to San Sebastian, Irún, Hendaye, Biarritz, Bayonne

partly because in your orange shirt you look like a better happier St. Sebastian

A Love Letter to My Best Friend by Andrew Warner

This video is a beautiful letter to a friend about mental illness.

I love the silliness of Shel Silverstein and all of his poems.

A poision tree by William Blake

And I waterd it in fears
Night & morning with my tears;
And I sunned it with smiles,
And with soft deceitful wiles.

And it grew both day and night,
Till it bore an apple bright.
And my foe beheld it shine,
And he knew that it was mine,

And into my garden stole,
When the night had veiled the pole;
In the morning glad I see
My foe outstretchd beneath the tree.”

Us Two by A.A. Milne

Also, a list of friendship poems would be remiss without Winnie the Pooh.

To all my friends by May Yang

“That I could be this human at this time

That I could be this moment at this time

That I could be this excellence at this time

Your Catfish Friend by Richard Brautigan

A charming poem about a person contemplating being a catfish in a pond.

The Friend By Matt Hart

This poem reminds me of my childhood summers in Chicago.

“The friend lives half in the grass

and half in the chocolate cake,

walks over to your house in the bashful light

of November, or the forceful light of summer.

You put your hand on her shoulder,

or you put your hand on his shoulder.”

Friends to the World

Here are two poems about friends with people we don’t know, our fellow humankind.

I Want to Apologize By Rupi Kuar

I included this one since I feel it speaks to friendship with women.

A poem about the importance of friendship with guests.

“The Arabs used to say,
When a stranger appears at your door,
feed him for three days
before asking who he is…”

The next set of poems are about friends who are lost to death or time.

I love the beautiful simplicity of this poem.

“I loved my friend

He went away from me

There’s nothing more to say

Soft as it began-

I loved my friend.”

A Walk in the Cemetery by Gary Soto

I searched for twenty minutes
For my murdered friend’s grave,
A small, white marker,
# 356 it reads. He is not
This number, or any number…”

To My Oldest Friend, Whose Silence Is Like a Death by Lloyd Schwartz

“In today’s paper, a story about our high school drama
teacher evicted from his Carnegie Hall rooftop apartment

made me ache to call you—the only person I know
who’d still remember his talent, his good looks, his self-

absorption. We’d laugh (at what haven’t we laughed?), then
not laugh, wondering what became of him. But I can’t call…”

Hoping to Hear from a Former Friend By Margaret Hasse

“Is it you on the other end of the line
hesitant to speak to me, pausing for a moment
to register my hello so you know my number
stayed the same, my last name remains mine?”

Since I am a dog lover and dog is humankind’s best animal friend, I naturally had to include some poems on the topic. Note: some are sad poems about lost friends.

A Dog Has Died By Pablo Neruda

Any excuse for Neruda.

“My dog has died.
I buried him in the garden
next to a rusted old machine.

Some day I’ll join him right there…”

I can attest personally that dogs can be singers (especially when I’m playing my alto saxophone).

“Amongst dogs are listeners and singers.
My big dog sang with me so purely,
puckering her ruffled lips into an O,
beginning with small, swallowing sounds
like Coltrane musing, then rising to power…”

Now some poems about terrible friends since we’ve all been there and done that. Hopefully these will serve as warnings for us in the future.

How to Murder Your Best Friend by Anonymous

“My first best friend is Awful Ann—
she socked me in the eye.
My second best is Sneaky Sam—
he tried to swipe my pie.
My third best friend is Max the Rat—
he trampled on my toes.
My fourth best friend is Nasty Nell—
She almost broke my nose…”

The Walrus and the Carpenter by Lewis Carroll

I had to have something from Lewis Carroll on this list. An important poem about not making the wrong kind of friends.

“The sun was shining on the sea,
Shining with all his might:
He did his very best to make
The billows smooth and bright —
And this was odd, because it was
The middle of the night…”

These are twenty friendship poems that look at different aspects of friendship. Want more poetry? Check out this post on short poems and this other post on love poems.