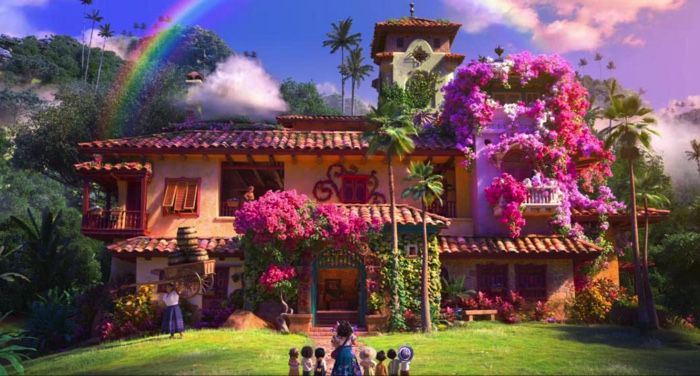 Over the 2021 holiday season, I sat down to watch Disney’s latest animated film, Encanto. I laughed, I cried, I couldn’t stop thinking, “Daaaaamn, this adorable musical about intergenerational trauma got hands!” As the grandchild of a Latin American immigrant and as an older sister, I kept seeing myself in amazing and uncomfortable ways. Like if you want to have a good time, maybe watch Dumbo or something.

The magic of Encanto flows like the river in the film: strong, ever-present, and able to be re-routed. Like many Disney films, Encanto can be categorized as a fantasy musical, but Encanto fits comfortably under the Magical Realism umbrella. What is Magical Realism? The term is oft confused with urban fantasy, fabulism, and even fantasy lite. That’s not exactly correct. First described as a painting style in 20th century Germany, Magical Realism came to mean having magical/supernatural elements presented in an otherwise mundane setting. Magical Realism is more a mode than a strict genre.

Encanto’s song “Surface Pressure” demonstrates time jumps and surrealism through Luisa’s fantastical point of view. Donkeys play violins in the background and dance, while Luisa and Mirabel float through cotton candy skies and face Cerberus in a fiery cavern. While the setting of Magical Realism stories might be mundane, there may be out-of-place scenes or places, such as Bruno’s sand-filled tower.

If Encanto were a novel, there would be no family tree, glossary, or map at the beginning. It would simply begin, as the movie does. Magical Realism does not rely on heavy exposition or narration. Everything, according to the reticent narrator, is as it should be. We don’t know why the candle is magic. Who made the candle? We don’t know. We don’t need to know to understand the story.

Just as many old fairytales were first told to warn children of the dark, Magical Realism stories contain messages, secrets, and political commentary. Magical elements are often tied to contemporary political horrors. In Allende’s The House of the Spirits, the unnamed country experiences massive changes as it transitions from a class-based oligarchy to a Marxist nation, reflecting Chile’s history. Meanwhile, the Trueba family becomes haunted by Clara’s psychic visions of an uncertain future. By surrounding this story with the story of the Truebas and the supernatural, the political is somewhat hidden. Weaving multiple stories together to tell one story, and conceal a message is another common element of Magical Realism.

We most prominently see this hidden storytelling in Encanto in the song “We Don’t Talk About Bruno.” By not talking about Bruno, the family is not talking about his gift, or their family’s slow shattering, leading to the destruction of Casita. As Casita begins to crumble and fall, it’s the family that is splintered, needing their own repairs.

While I do not believe the magic held by the Madrigal family of Encanto is meant to be political, I do think it’s a reflection of their family trauma, which is also comparable to contemporary family stories. At the beginning of the film, we meet Abuela Alma as a young woman with her husband Pedro, forced from their home with their three infants. From context, we can guess that this sequence takes place during the Thousand Days’ War, around 1900.

This traumatic time bore a hole in Abuela’s heart, spreading through her family through magical gifts. The triplets were granted gifts to strengthen their new town and be prepared for future trouble. Julieta’s gift fights against food scarcity and sickness, both of which are anxieties during troubled times. Bruno’s clairvoyance, like Clara del Valle Trueba’s, is imperfect, but provides some relief about future worries. Bruno’s gift is seen as a nuisance rather than a blessing.

The weather follows Pepa’s moods, ideal for providing a new community with the exact amount of sun and rain for growing crops, but Pepa spends much of the film forcing her emotions into a shape that doesn’t fit. In The House of the Spirits, Clara’s supernatural abilities are known by her family, but dismissed until useful. Her abilities strengthen when she is happy and at peace, even after death. Magic and supernatural abilities are commonly connected to emotion in Magical Realism.

With the new generation of Madrigals, their gifts serve the community first. Dolores is the town’s secret keeper, who shrinks herself down. Isabela beautifies the town with her jacarandas and roses. Luisa has the weight of the town on her shoulders, moving churches and donkeys and redirecting rivers. Camillo uses his shapeshifting to give tired parents a rest, put a smile on a neighbor’s face, and assist with decorating. Even at five, Antonio knows that he must use his gift to be helpful, instructing animals to warm Abuela’s chair for her. While Abuela holds no gift of her own, just like the chatelaine at her waist, she holds the keys to the family, expecting nothing but perfection.

Casita itself is a marker for Magical Realism. Casita is alive! It attends to the family’s needs, providing chairs, moving stairs, decorating itself, and waving goodbye. This casual integration, or hybridity, of the mundane and the supernatural perfectly demonstrates how Magical Realism is different from fantasy. The supernatural elements are proportional to the world. If Casita had a humanoid face, it would no longer seem friendly and charming, but would become monstrous. The entire community sees Casita as theirs, gathering for parties and daily activities. Their safe little town, the Encanto, is thanks to the Madrigals. The town of Macondo in Garcia Márquez’s One Hundred Years of Solitude is similarly founded.

Throughout One Hundred Years of Solitude, yellow butterflies follow Mauricio Babilonia, as a symbol of hope. This stark image of the Catastica lycurgus, a Colombian butterfly, makes several appearances in Encanto. Butterflies flit across the screen, Mirabel’s skirt is decorated with embroidered butterflies. When Bruno agrees to look into the future, Mirabel spots a yellow butterfly — the candle flickering in the distance, showing that there’s still a chance. The devastating song, “Dos Oruguitas” (Two Caterpillars) tells the story of Pedro and Alma falling in love and protecting their family. As Pedro and Alma are forced apart, the song tells of the chrysalis. In order to become a butterfly, a caterpillar must dissolve itself into goo and reform before breaking open its safe place. When the Madrigals rebuilds Casita, they find one another again, emerging from the chrysalis whole and beautiful. The Catastica Lycurgus was thought to be extinct, existing only within One Hundred Years of Solitude. Like the flickering candle flame-butterfly, the shy butterfly was seen again in 1978. There’s hope.