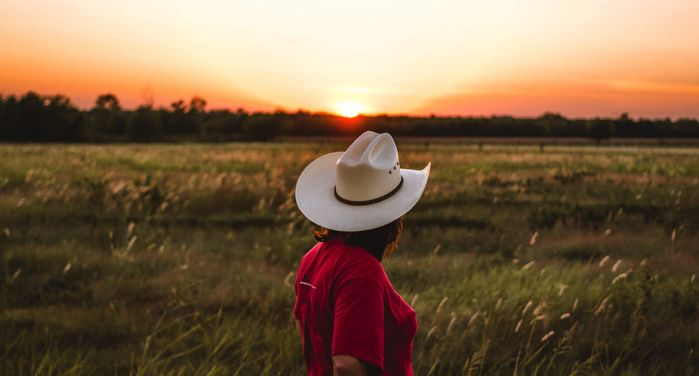 What Is Cowboy Poetry?

Cowboy poetry began during the long cattle drives of the 19th century when cowboys herded cattle for months, traveling hundreds of miles on the job. From the 1860s to the 1910s, more than 25 million cattle were driven from Texas to Kansas and elsewhere. Human contact was minimal, with only their fellow workers to communicate with. Many walks of life came together on these long hauls. The men on them could be veterans of the Civil War, Mexican vaqueros, Native Americans, or formerly enslaved. The men, out of necessity, got over the differences quickly. The monotony required some way to pass the time. To make a grueling job a little more bearable. The same way we, today, turn to tales of our past at a silent dinner table or a bound book of stories when we are lonely, storytelling emerged to fill the emptiness. Cowboys wrote songs and shared stories in the dark of the night, speaking poetry into existence.

As technological advancements of the 20th century removed the need for cattle drives, the genre shifted into a way for cowboys to memorialize their days on the job, especially as movies and plays altered their public image into rough and gruff lone ranger types, far removed from the reality of their identities. Songs of the Cowboys, the oldest known anthology of cowboy poetry, was compiled in 1907. And it’s not just poetry, really, that was born of this tradition. In fact, the song “Home on the Range” was first recorded by John A. Lomax, a Black cowboy and saloon owner in 1908.

Through the late 20th century, pieces of the genre continued to appear in agricultural magazines, feed store calendars, diner menus, and other places cowboys frequented to share their stories with each other. Then, in 1985, the National Cowboy Poetry Gathering began, bringing those in the cowboy lifestyle together to reminisce and share their work.

While it isn’t a hard and fast requirement for writers of the genre to be cowboys, many are and write directly from their lived experience. Poetry in the genre often follows a traditional rhyme scheme and meter and covers topics connected to the cowboy way of life like raising livestock, western U.S. landscapes, ranch work, and the image of the cowboy both past and present. Due to the tradition it grew out of, cowboy poetry is often meant to be read — and is performed — aloud.

These aren’t always-held-to rules, though. Rod Miller, a writer of cowboy poetry, quotes a saying in the community, “any poem a cowboy likes is a cowboy poem.” Free verse, too, has begun to creep into performances at the National Cowboy Poetry Gatherings, despite those who hold fast to tradition.

Though many of us may think the cowboy way of life is trapped behind the amber of the past, the flocks of people at cowboy poetry gatherings across the United States attests to its still-beating heart. Cowboy poetry is not a historical genre, in fact, but a contemporary one.

One small thing of note as well. There’s a significant domination of the genre by white men, especially considering the diverse populations from which the genre came. Despite the 36th National Cowboy Poetry Gathering being dedicated to Black cowboys, the artist line-up was lacking representation of the very group the gathering was dedicated to. Many Black cowboys spoke at the event, but the poetry readings were where the representation was lacking. Cowboy poetry as a genre does not, in general, represent the people who created it in the 19th century.

Curious about the genre, but aren’t sure where to start? Try one (or a few) of the below cowboy poet’s work to get you going.

Baxter Black is one of the most well-known on the scene. Self-described as a cowboy poet and master humorist, Black is a former large-animal veterinarian who has published 26 books since his emergence as a speaker and writer in the 1980s. His most recent, A Commotion in Rhyme (2018), is “a book that shows cowboy poetry is still alive anywhere you find a sweaty saddle blanket, a green colt and someone who survived the wreck long enough to tell the story!” Or, for a briefer introduction, try his poem “A Veterinarian’s Nightmare or A Dissertation on Plant Rights” from his 1987 appearance on Johnny Carson, or his poems “The West” and “The Vanishing Breed!” to get a feel for this genre staple’s work.

Twice voted the top female cowboy poet in North America, Doris Daley is a cowboy poetry powerhouse and a great introduction into the genre. Born in Alberta, Daley grew up on a family ranch and has spent the last 20 years as a performer of her poetry. Try her 2011 book, West Word Ho! The Western Poetry of Doris Daley or the 2020 anthology Vistas of the West: Poems and Visuals of Nature in which she and many other writers in the genre explore the beauty of the world around us. Recordings of her reading her poems “Stand Upwind From Me” and “Three Quarter Time” are up on her website along with a few more if you want to hear her perform.

Selected as Montana’s Poet Laureate in 2009, Henry Real Bird is a native Crow Indian, a former rodeo cowboy, and, now, a poet. Born on the Crow Indian Reservation in Montana, Real Bird now spends a lot of his time teaching Crow youth and trying to preserve the language. In 2010, he rode across Montana on horseback for over 400 miles, handing out his poetry books along the way and connecting with the people. Try his book, Horse Tracks: Poems, which was named the Poetry Book of the Year by the High Plains Book Awards in 2011, his subsequent 2013 publication, Wolf Teeth: Poems, or a recording of his poem “Tex North” from the 2019 National Cowboy Poetry Gathering.

Grammy-nominated singer and spoken word poet, dubbed “The American Songster,” Dom Flemons was invited for his third appearance at the 36th National Cowboy Poetry Gathering dedicated to Black cowboys of the past and present. His album, Black Cowboys, is a great place to start for anyone wanting to explore the musical side of the genre. The 18-song album combines songs and spoken word poetry into a one-of-a-kind listening experience. You can also see performances of “Little Joe the Wrangler” or “Wild Ox Moan, a.k.a. Black Woman” to see if it’s to your liking. It’s not just poetry that makes up the genre and Flemons is proof of that fact.

Co-founder of the National Cowboy Poetry Gathering, Waddie Mitchell is a household name in the cowboy poetry world. Born in Elko, Nevada, where the gathering takes place every year, Mitchell grew up on a ranch without electricity. For entertainment, he turned to stories. Often performing with a guitar in the background, Mitchell’s poetry is extensive and varied. Try his One Hundred Poems, Waddie’s Whole Load, or, if you want to get into the holiday spirit, Waddie Mitchell’s Christmas Poems. Performances of “Evening Chat” and “The Cowboy’s Dream” are available for your viewing pleasure.

The genre is also rife with anthologies featuring many of the authors above, along with many, many more. Try New Cowboy Poetry: A Contemporary Gathering, Cowboy Poetry: A Gathering, or Humorous Cowboy Poetry: A Knee-Slappin’ Gathering to get you started. The Western Folklife Center run a YouTube channel chock full of performances from all walks of cowboy poetry performers, too.

In-person events more your taste? There are many, many cowboy poetry gatherings around the United States. Texas, Montana, Arizona, and more host gatherings yearly. Check your state. I’m sure you’ll find an event to attend whether that be local or, for those craving a road trip, not so local to you.

Want to learn more about other poetry genres? We’ve got you covered. Try this poetry guide if you’re brand new to poetry.