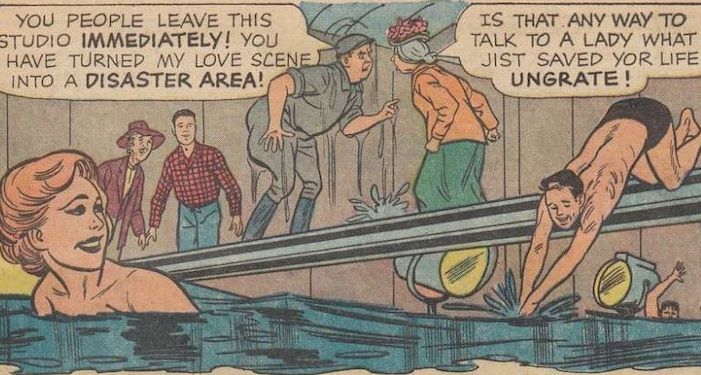 I had no idea. So I went looking, and this is some of what I found.

(Big shout-out to Comic Book Plus: without their vast store of old-timey comics, I never, ever could have written this article!)

First, Some Firsts (or Almost Firsts)

The most basic thing I learned is that film-to-comic and TV-to-comic adaptations are called licensed comics, since they are based on licensed properties. The earliest licensed comics were newspaper comic strips, which were wildly popular in the first half of the last century. This means that movie-to-comic adaptations are practically as old as movies themselves: in 1917, there were several strips featuring the Tramp, the silent film character invented by Charlie Chaplin. These strips had little to do with the source material: the punchlines all depend on dialogue, and the Tramp was obviously not known for talking!

Disney would do a ton of newspaper strips in the 1930s, including a 1937 adaptation of Snow White and the Seven Dwarves.

The earliest example of a comic book adapting a movie I could find is from 1941, when Lev Gleason Publications adapted The Saint as a feature in Silver Streak Comics. They were real proud about it, too, if this splash page is any indication.

Soon, there were whole movie-themed comics. Harvey Comics published the first Green Hornet series in 1942, and in 1946, Fiction House introduced Movie Comics. Each issue of Movie Comics featured an illustrated version of a then-new film, plus various Hollywood-themed stories. (Like the movies themselves, comics back then did not include just one story. In addition to the “feature presentation,” they had several back-up features.) There was even a comic that adapted a radio program: Dell Comics’s Charlie McCarthy, which began in 1949.

And that is the perfect segue into a discussion of Dell.

When it comes to vintage licensed comics, Dell is the undeniable champion. Dell was the distributor for Western Publishing, which later switched their business over to Gold Key, a company of their own creation and another big name in old-timey licensed comics. (Gold Key’s most famous comic was about a little show called Star Trek.)

Dell didn’t just dominate the licensed comics business: they may have invented TV-to-comics adaptations. The earliest such comic I know of is Dell’s Howdy Doody. The TV show debuted in 1947, with the comic following in late 1949. If you are not a baby boomer and/or a dweeb like me, Howdy Doody was about the titular cowboy puppet and his group of puppet and human friends. The comic translated this format by turning everyone into cartoons, though Howdy’s “handler,” Buffalo Bob, is absent, at least in the issue I skimmed. Maybe he would have raised too many questions in this format, where Howdy Doody and the other puppets walk around on their own.

I can’t prove that this is the first TV-to-comic adaptation, but it would make sense if it was: Howdy Doody was one of the first ever children’s shows, and it was certainly the most popular.

Every comic book publisher has their niche, and licensed properties were Dell’s and Gold Key’s. Both made their name producing comics based on Warner Bros., Hanna-Barbera, and Disney cartoons. By the next decade, they were making comics out of practically every ’60s TV show you could possibly name, plus a few you can’t. (Ensign O’Toole, anyone? Yeah, me neither.)

But Were They Any Good?

The quality of early licensed comics — like every other type of comic — varies. While I’m not a big fan of The Beverly Hillbillies, I can appreciate how well Dell’s version adapts the series’ style of humor while taking advantage of the new medium to tell jokes they couldn’t have afforded to do on the small screen.

In many cases, however, it’s obvious that the creators had not seen the source material and were working off a synopsis and maybe some stills or a trailer. For example, take Movie Love #14, published by Eastman Color Publishing in 1952. It features a lifeless and disjointed (and miscolored) adaptation of Singin’ in the Rain, possibly definitely the greatest American musical ever made.

Her dress is blue in this scene, dang it! The whole comic is ruined!

Now I couldn’t say why they decided to adapt a musical, of all things, into a comic. (And they did it more than once, adapting Two Weeks with Love and I Love Melvin with equally stiff results.) They obviously had to chop all of the musical numbers. This is especially heinous with a movie like Singin’ in the Rain, where the entire plot revolves around sound. I’m not saying you couldn’t adapt Singin’ in the Rain as a comic, but you’d have to put a lot more effort into it than Eastman Color did.

TV adaptations may have had an advantage in this regard: they could use the characters from the program but write original adventures for them, leading to generally smoother storytelling. The tradeoff was that you could never be sure if the creative team knew what they were doing. There are apparently Star Trek comics where Spock gets overemotional and starts yelling at the drop of a hat. Meanwhile, I have an issue of Gold Key’s The Man from U.N.C.L.E. where the artist a) is clearly drawing Robert Vaughn based on vague memories of seeing The Magnificent Seven in theaters half a decade ago, and b) has never even sniffed a photo of David McCallum in their entire life.

In fairness, you can’t expect an adaptation to be exactly the same as the source material, especially when the media involved are as different as comic books and television. Still, this feels shoddy. You can tell the folks at Gold Key were working on a limited budget and/or schedule, or that the license holders on these properties were a little tightfisted with materials that could have improved the comic’s accuracy.

The next decade would see a seismic shift in the quality and status of adaptation comics. Sadly, the publishers that pioneered the genre (if that is the appropriate word) would not be a part of the change.

Long Ago, in an Adaptation Far, Far Away…

Both Dell and Gold Key lost steam in the ’70s. Gold Key even lost the rights to Star Trek to Marvel just before the first Trek film was released. (Set phasers to OUCH.) Dell shut down in 1974, and Gold Key followed suit a decade later.

Marvel, meanwhile, though best known for their superhero comics, continues to publish comics based on TV and film. They no longer publish Star Trek comics (IDW Publishing currently has the rights), but they sure do publish the heck out of Star Wars comics.

Marvel was the very first to publish Star Wars comics back in 1977 — despite the fact that, according to then-associate editor Jim Shooter, the only people interested in this idea were George Lucas and exactly one guy at Marvel. Fortunately, that one guy was former editor-in-chief Roy Thomas, who had a lot of pull to say the least.

Unlike with previous adaptations, the inevitable changes to dialogue, character design, etc. feel more or less deliberate (the above panels notwithstanding). It also helps that Star Wars got a whole six issues to adapt A New Hope before the series switched over to original stories — or, as the covers so enthusiastically put it, to stories “beyond the movie! Beyond the galaxy!”

I don’t mean to suggest that all licensed comics pre-Star Wars were bad and that all licensed comics post-Star Wars were good. That’s ridiculous and untrue. However, this is the first time that the comic felt like a big deal, like the creators knew they had valuable material and were given the time and resources to do it justice. And this approach certainly worked out for Marvel: according to Shooter, Star Wars comics sold when basically none of their other titles did, saving them from bankruptcy.

(The comic book rights for Star Wars later went to Dark Horse, which has released their fair share of licensed material. Now, of course, Disney has gobbled up both Marvel and Star Wars, so Marvel is once again publishing Star Wars comics. IDW publishes some Star Wars comics as well.)

Though comics are not nearly the huge cultural force they once were in America, licensed comics are still going strong. Bongo Comics was founded in 1993 and mostly published comics based on cartoons that I extremely don’t care about; they shut down in 2018. In more recent years, BOOM! Studios (Fraggle Rock, Steven Universe), Dynamite Entertainment (Highlander, The Twilight Zone), and IDW Publishing (CSI, Doctor Who) have picked up where Dell and Gold Key left off.

In a slightly different vein, it’s interesting to see the power dynamics in the relationship between comics and film/TV. Comics may provide the initial ideas for things like the Marvel Cinematic Universe, but the MCU beams ideas right back at them, influencing everything from costume designs to team line-ups. The same is true of DC, with TV characters like John Diggle (from Arrow) and Ryan Wilder (from Batwoman) going on to appear in the comics their shows were based on. Book Riot’s own Jessica Plummer has already covered the fascinating (and unfortunately racist) comics-to-TV-to-comics DuckTales pipeline over here. I think my favorite example is comics like Batman ’66, which are based on a TV show that was based on a comic; they feel like running a phrase through multiple languages on Google Translate, but with better results. The entertainment world is as synergistic as ever.

The cozy relationship between comics and television is especially fascinating to me, given that the rise of TV was one of the reasons for comics’ decline throughout the ’50s and ’60s. And yet, the comic book industry seemed determined to look at the economical side of things and cash in on the small screen’s successes rather than close ranks.

In any case, licensed comics are an endless source of entertainment, whether they accurately represent the source material or are so wildly off the mark that you can’t help but laugh!