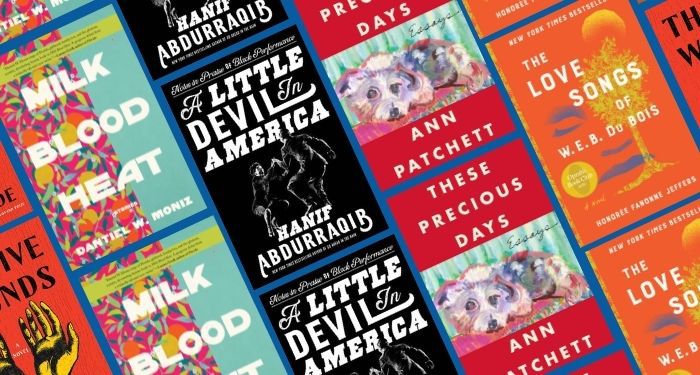 The 2022 PEN American Literary Award Finalists have been announced! This year’s awards will confer $350,000 to writers and translators in eleven different categories that include fiction, nonfiction, poetry, biography, essay, science writing, literature in translation and more. In it’s announcement PEN describes the finalists books as “dynamic, diverse, and thought-provoking examples of literary excellence” and I’d dare anyone to disagree — this year’s lists are truly thrilling and impressive. This year’s winners will be announced at the Literary Awards Ceremony on February 28, 2022 at 8pm at The Town Hall in New York City.

This award is given to a book-length work of any genre for its originality, merit, and impact, which has broken new ground by reshaping the boundaries of its form and signaling strong potential for lasting influence. And this year’s judges are Sarah Shun-lien Bynum, Angie Cruz, Maurice Manning, and Steph Opitz.

The President and The Frog by Carolina De Robertis (Knopf)

The Trees: A Novel by Percival Everett (Graywolf Press)

The Kissing Bug: A True Story of a Family, an Insect, and a Nation’s Neglect of a Deadly Disease by Daisy Hernández (Tin House Books)

This award is given to an exceptional book-length work of any literary genre by an author of color. And this year’s judges are Jaquira Díaz, Rigoberto González, Sequoia Nagamatsu, and Khadijah Queen.

This award is given to an author whose debut collection of short stories represents distinguished literary achievement and suggests great promise for future work. And this year’s judges are Ling Ma, Manuel Muñoz, and Oscar Villalon.

Give My Love to the Savages: Stories Chris Stuck (Amistad Press)

This award is given to a debut novel of exceptional literary merit by an American author. And this year’s judges are Zeyn Joukhadar, Téa Obreht, and Daniel Torday.

Detransition, Baby: A Novel by Torrey Peters (One World)

PEN/Diamonstein-Spielvogel Award for the Art of the Essay ($15,000)

This award is given to a seasoned writer whose collection of essays is an expansion on their corpus of work and preserves the distinguished art form of the essay. And this year’s judges are Jason DeParle, Hua Hsu, and Marilynne Robinson.

A Little Devil in America: Notes in Praise of Black Performance by Hanif Abdurraqib (Random House)

Graceland, at Last: Notes on Hope and Heartache from the American South by Margaret Renkl (Milkweed Editions)

This award is given to a poet whose distinguished collection of poetry represents a notable and accomplished literary presence. This year’s judges are Lillian-Yvonne Bertram, Lia Purpura, and Safiya Sinclair.

This award is given to a book-length translation of poetry from any language into English. And this year’s judges are Caro Carter, Michael Favala Goldman, and Parisa Saranj.

I Name Him Me: Selected Poems of Ma Yan, Ma Yan (Ugly Duckling Presse)
Translated from the Chinese by Stephen Nashef

This award is given to a book-length translation of prose from any language into English. And this year’s judges are Almiro Andrade, Mayada Ibrahim, Barbara Ofosu-Somuah, and Sharon E. Rhodes.

The Last One: A Novel by Fatima Daas (Other Press)
Translated from the French by Lara Vergnaud

This award is given to a work that exemplifies literary excellence on the subject of the physical or biological sciences and communicates complex scientific concepts to a lay audience. And this year’s judges are Jonathan Safran Foer, Michele Harper, and Lauren Redniss.

The Memory Thief: And the Secrets Behind What We Remember by Lauren Aguirre (Pegasus Books)

Fox & I: An Uncommon Friendship by Catherine Raven (Spiegel & Grau)

Believers: Making a Life at the End of the World by Lisa Wells (Farrar, Straus and Giroux)

Life’s Edge: The Search for What It Means to Be Alive by Carl Zimmer (Dutton Books)

This award is given to a biography of exceptional literary, narrative, and artistic merit, based on scrupulous research. And this year’s judges are Luke Dittrich, Paul Golob, and Imani Perry.

All the Frequent Troubles of Our Days: The True Story of the American Woman at the Heart of the German Resistance to Hitler by Rebecca Donner (Little Brown and Company)

Albert and the Whale: Albrecht Dürer and How Art Imagines Our World by Phillip Hoare (Pegasus Books)

The Gambler Wife: A True Story of Love, Risk, and the Woman Who Saved Dostoyevsky by Andrew D. Kaufman (Riverhead Books)

This award is given to a distinguished book of general nonfiction possessing notable literary merit and critical perspective that illuminates important contemporary issues. And this year’s judges are Emma Copley Eisenberg, Dr. K. Tsianina Lomawaima, Chanel Miller, and Dagmawi Woubshet.

All that She Carried: The Journey of Ashley’s Sack, a Black Family’s Keepsake by Tiya Miles (Random House)

Let the Record Show: A Political History of ACT UP New York, 1987-1993 by Sarah Schulman (Farrar, Straus and Giroux)

How the Word Is Passed: A Reckoning with the History of Slavery Across America by Clint Smith (Little Brown and Company)