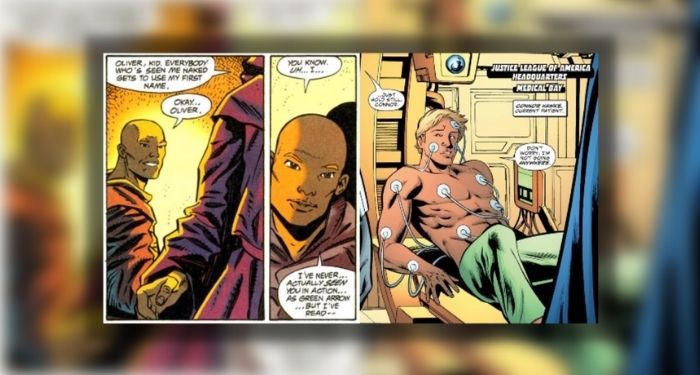 Recently, DC released a piece of promotional art for their next major crossover event, the hilariously named “Dark Crisis,” which kicks off in May. Dark Crisis revolves around the (inevitably temporary) death of the Justice League, and the art in question is a two-page spread that heavily showcases DC’s “legacy heroes” — the sidekicks and children of older heroes who will have to step in once the Justice League is gone.

At least one fan noticed something odd about this image:

The artist, Daniel Sampere, quickly responded to apologize for the mistake and to assure readers that the art will be corrected for print and future digital use:

Sure enough, if you look up more recent iterations of the splash page, like the one I posted at the top of this article, Connor’s skin has been darkened.

At first, I was willing to give this slip-up a lot of leeway. I do genuinely appreciate Sampere’s quick response and that DC acted immediately to fix the problem. And this mistake is very easy to make with Connor in particular.

See, Connor is sort of the poster boy for whitewashing in superhero comics, at least at DC. His father is white; his mother has a Black father and a Korean mother. When Connor first appeared in 1994, he had a relatively deep complexion. Though his skin tone ranged pretty widely over the rest of the decade (and sometimes veered into greenish or grayish territory), he was always some shade of brown.

But soon after Oliver Queen returned from the dead in 2001, Connor rapidly started to get lighter, as if once his white father was around, artists could no longer comprehend that Connor was not also white. (The fact that this coincided with him being narratively sidelined makes it even worse.) By the time he was written out of the comics in the late 2000s and then retconned out of existence entirely with the 2011 New 52 reboot, he looked like a lightly tanned white guy.

Connor returned last year with a major role in Robin, as well as being featured in both the Green Arrow 80th anniversary special and Festival of Heroes, an anthology book highlighting creators and characters of AAPI heritage. All three clearly depicted him as brown…at least most of the time. Connor even refers to himself as Blasian in Festival of Heroes, a word I’m not sure had even been coined yet back when he was a lead hero in the ’90s. However, the Howard Porter variant cover for the issue originally depicted him as no darker than (white) heroes Arsenal and Black Canary, until that, too, was corrected.

In other words, when Sampere says “we had the wrong references,” I absolutely believe him, because if you Google “Connor Hawke,” the results are all over the place in terms of skin tone. I was willing to let this one slide, especially considering that this splash page has over four dozen unique heroes depicted.

And then I realized that John Stewart, arguably DC’s most prominent Black character, appears to be white in the panel in the upper right of the page. At which point I lost all patience.

Now, I still don’t ascribe malicious intent to any of this. Mainly, I chalk it up to sloppiness — on the part of the creators, yes, but even more so on the part of the editor. Even if the creators don’t know what complexion a particular character has (which would be…odd, in this case, considering that John is clearly Black in the bottom right corner of the page, and that Dark Crisis is being written by Joshua Williamson, who has also been writing an obviously mixed race Connor in Robin for over a year), the editor should still catch glaring errors like this, the same way they would if Superman’s cape was colored green or Bruce Wayne’s hair was suddenly pink.

But this kind of carelessness is far less excusable than a miscolored cape, especially because Connor and John aren’t the only victims of whitewashing over at DC. I’ve written about this issue with Connor before, and noted instances of Black characters like XS, Empress, Onyx, and Machiste being blatantly miscolored, usually as obvious errors rather than the creeping erasure Connor’s been subjected to.

In the four years since I wrote that article, I’ve somehow stumbled upon even more examples, which is particularly damning when you think about how few characters of color there are in the DCU to begin with.

For example, the originally white character Obsidian was retconned out of existence by Flashpoint, then reintroduced in Earth 2: World’s End #8 in 2014 as Black, which, considering his powers and codename, smacks a little of the historical tendency to put the word “Black” in Black characters’ codenames (Black Panther, Black Vulcan, Black Lightning, Black Racer, Black Manta…). But hey, it was nice to see Todd again, even if he was suddenly a criminal (sigh) who was instantly confronted with a fellow criminal’s racism, and it brought a little much-needed diversity to the book.

…Or it would have, if Todd wasn’t suddenly white in the very next issue and for the entire rest of the book. Even though a character had been explicitly racist to him because he was Black in his first New 52 appearance. How on earth something like that gets missed, I have no idea.

(In case you’re wondering, Connor Hawke was a white redhead in this book, until he died and was replaced by Oliver Queen. I wish I was making this up.)

Or how about the Aquaman supporting character Jurok Byss, keeper of Atlantis’s trained monsters? Here’s just a small sampling of how he’s drawn and colored in the 2016 Aquaman series:

I get that in the grand scheme of things, this is a relatively minor character, but his skin tone and phenotype are all over the place in a fairly compressed period of time. Reading this series felt like every time the artist changed, so did Jurok’s ethnicity.

(I want to note at this point that while I’ve used all DC examples here, Marvel is no better, with a notable tendency to whitewash characters like Storm and Sunspot. This is an industry-wide problem, not a single company’s.)

I understand that mistakes happen. Comics are produced on a punishingly tight schedule. The colorist on any given book may not have colored the issue before, hence a certain amount of inconsistency. Editors are overworked and underpaid, presumably even more so since DC laid off a lot of their editorial staff in 2020.

But this isn’t a typo, or the tail on a speech balloon pointing to the wrong character. We’re talking about representation and identity here, and those mistakes matter on a much more serious — and potentially much more hurtful — level.

I don’t work in comics, and so I don’t know what the most practical solution is here. An internal character bible? Directing colorists to always check the DC wiki? More due diligence on editorial’s part?

What I do know is that this has to be addressed. Because right now, the fact that I can dig up frequent examples of these thoughtless errors over a period of 20 years without any improvement tells me that DC (and Marvel) simply does not care to fix things. And that’s the real problem, more than any one piece of art — not that any given character is miscolored, but that DC doesn’t see these miscolorings as a systemic issue that needs to be nipped in the bud.

I know there are individual creators at DC who are doing their utmost to include a diverse array of characters accurately and respectfully. I’m sure there are individual editors who care deeply about representation. But until DC fixes the systemic issues that allow major mistakes like this to continually slip through the cracks, it makes no difference to readers. Connor Hawke may be allowed to say he’s Blasian now, but a picture is worth a thousand words, and that picture is too often glaringly white.