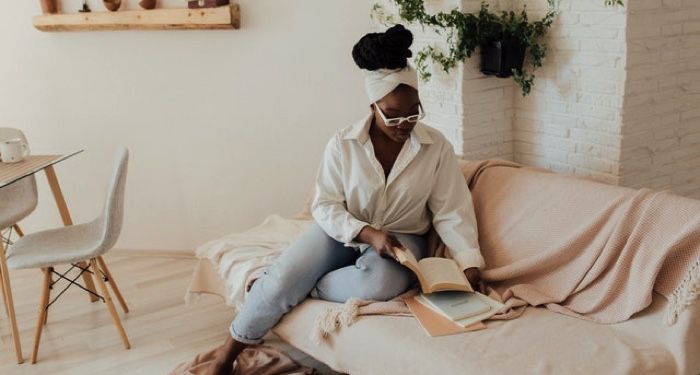 Walk into any bookstore, and you’ll see the women’s fiction display from a mile away. Piled high for all to see, these covers typically feature photos of feminine-presenting people, usually turned away from the camera or with their faces out of sight. Pastels, florals, and and other traditionally feminine design elements give the cover that perfect women’s fiction vibe. But what is women’s fiction?

To start, if you look for a corresponding table of “men’s fiction,” you won’t find it. Search online for lists of recommended reading for men, and most of these novels can be found in the “classics” or “literary fiction” section of the bookstore. This misogynistic way of looking at women’s stories limits our understanding of what these stories can be, who they are about, and who is reading them.

In 2017, Rioter Trisha Brown wrote about the many issues she has with women’s fiction. The sexism of having a women’s genre and not a men’s, the upholding of the gender binary, and how the arbitrary label frustrated her to no end — and understandably so. The genre carries with it a history of all of these problems and more. But then why are so many people drawn to the genre? Is there a way these kinds of stories might rise above their origins into something with a more contemporary understanding of women’s stories?

What is women’s fiction?

Traditionally, women’s fiction has been defined by its focus on the protagonist’s emotional journey and relationships. Although women’s fiction can include romance as part of the plot, it’s not necessarily the ENTIRE plot of the book. And that romance might not end in a happily ever after. In contrast, the romance genre specifically follows characters on their journey to love and their happily ever after.

Even though the genre has traditionally focused on women’s stories written by women, people of any gender can write these novels or can star as the protagonist. For example, Nicholas Sparks reigns as one of the most popular authors of women’s fiction, and his novels feature several men as protagonists.

Where did women’s fiction come from?

Since the dawn of the literary form, authors have used their novels to instruct women on how to behave. In Pamela, often considered the first English novel, we follow a well-spoken maid who refuses her rake of an employer, maintaining her virtue until the rake reforms and marries her. This novel was considered so instructive for respectable young ladies that pastors praised it from their pulpits.

Hundreds of years later, we still produce novels that present women as paragons of virtue, maternal love, and never-ending emotional support. These protagonists aren’t created to represent women as they actually are, but rather as who they should aspire to be. In many of these novels, we see women who struggle to be the “right” kind of mother, supportive wife, or caring daughter.

In her article “What Do We Mean When We Say Women’s Fiction?” Liz Kay reflects on this history of the genre and how she cringes when people label her novel as “Women’s Fiction” because she wants her stories to reflect women as they are, with all of their flaws. She says, “In writing my novel, I wasn’t interested in either holding up or critiquing the behavior of one woman — whether she drinks too much, or uses profanity, or is too promiscuous or alternately too cold. She’s too demanding; she doesn’t stand up for herself. She is all of those contradictory things and more, so which do you want to censure her, censure any of us, for?”

What’s next for women’s fiction?

Many readers agree with Kay and are pushing to see the genre change. New authors are bringing their literary chops to stories featuring characters struggling with their relationships while on emotional journeys, creating upmarket fiction versions of women’s fiction. But these stories are messier, showing their characters as fully human beings, not as paragons of virtue that audiences should aspire to.

Since this type of fiction isn’t actually limited to women at all, author and book coach Lidija Hilje takes it a step further and believes that “the term ‘women’s fiction’ isn’t the best-suited for the genre, as it implicitly excludes other genders. A better term would be emotional fiction, or relationship fiction, or emotional journey fiction, or even adult-coming-of-age fiction.”

As the genre has changed over time, women’s fiction has become less about centering women per se. Women’s fiction focuses on aspects of humanity — love, family, relationships — that society has traditionally viewed as more “womanly” traits. But women aren’t the only people who have deep emotional experiences and want to read about them. These stories aren’t just about women or for women; they’re about being human, with all of the glorious messiness that comes with it. So perhaps Lidija Hilje is right — it looks like women’s fiction is long overdue for a name change.

For more reading, check out 100 Must-Read Classics by Women.