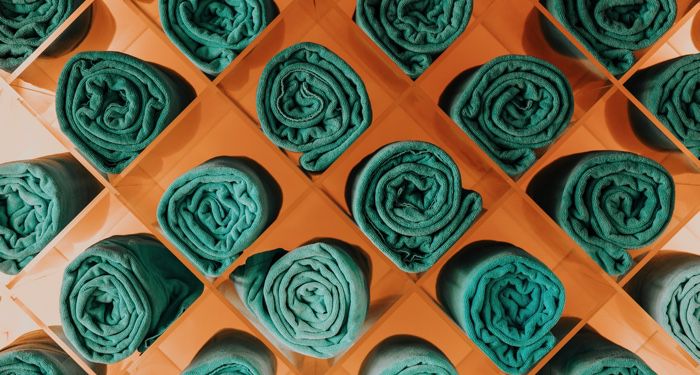 Before May the Fourth was a big deal, there was Towel Day.

After creative Renaissance man Douglas Adams’s death in 2001, fans declared May 25 Towel Day in his honor, deciding that on that day, like the characters in every incarnation of the maestro’s much beloved Hitchhiker’s Guide to the Galaxy, everyone should know where this most useful of implements was at all times.

The legend of the towel was introduced in the original 1978 Hitchhiker’s radio drama (for which Adam’s wrote the script) and expanded upon in the book of the same name, touted as, “the most useful object an interstellar traveller can have.” And, in truth, the uses of this rectangle of cloth are numerous, practical, and can even convince the uninitiated that the bearer is so well prepared for any eventuality, they will happily lend them anything the hitchhiker may have forgotten, including things the strag (non-hitchhiker) would expect them, in the presence of the towel, to have (please keep in mind that Adams started his career writing for Monty Python’s Flying Circus).

How did the whole legend of the towel come about? Mental Floss: The Curious Reader: A Literary Miscellany of Novels & Novelists has the origin story (and many, many other hilarious and weird literary tidbits — famous author feuds, anyone?):

So, does the Guide specify which sort of towel is best to take on your journey among the stars? It does not, and as far as I can recall (which, full disclosure isn’t all that far these days, though I did fact check with my husband who confirmed) screen adaptations usually feature a plain bath towel, which…look, all I’m saying is if I were going to hop a spaceship with a depressed robot and a bunch of weirdos with the possibility of being trapped listening to Vogon poetry, I might want something a little more inspiring. A little more…literary perhaps?

For those interested in the small and unobtrusive, a tea towel is the way to go, though this model may not serve to keep you as warm as larger ones, nor will it serve to keep the marble sand of Santraginus V out of your butt crack. It is rather pretty, however, and will remind you of classic stories you can tell your rapt audience to pass the time between stopovers — or to distract yourself with when you are inevitable captured or in suspended animation or some other situation that requires you to entertain yourself as the world(s) burn down around you. Or while you’re laying on the ground in front of an excavator trying to knock down your house. So useful.

It is a comic book character. It has a hood. It will give you the power to break the fourth wall to ask how the hell you got yourself into this situation. Can you imagine something made of cotton imbuing you with so many different powers? You’ll be unstoppable. Ish. Unstoppable-ish. Don’t get cocky, kid. Sorry, what? Wrong franchise? Look, a good lesson is a good lesson. You don’t know what’s out there. I don’t know what’s out there. Even the Guide doesn’t know everything. No, you’re responsible for the updates. I put it on your list. Well, it’s not my fault you didn’t check. We’ve clearly all been on this ship for way too long.

Always good advice and right from the source. Plus, if you have your towel, you’ll never need to. A beach towel may be a little awkward to haul around but it will cover all the bases: blanket, beach chair, bottom-half cover, shirt, hat, invisibility cloak, whatever. This is a model with all the options and just so meta with the nod to its own source material. The maestro would approve. Plus, if he’d had a bright yellow towel with red stripes, he might not have lost it in the first place. Though that would have deprived we glorious nerds of a day upon which we can give one another sage nods while everyone else wonders what we know that they don’t.

May 25 only comes around once a year. Probably. I don’t know, time isn’t really linear, so it’s probably best to always know where your towel is. And your copy of Mental Floss: The Curious Reader. Because it’s definitely better than Vogon poetry.