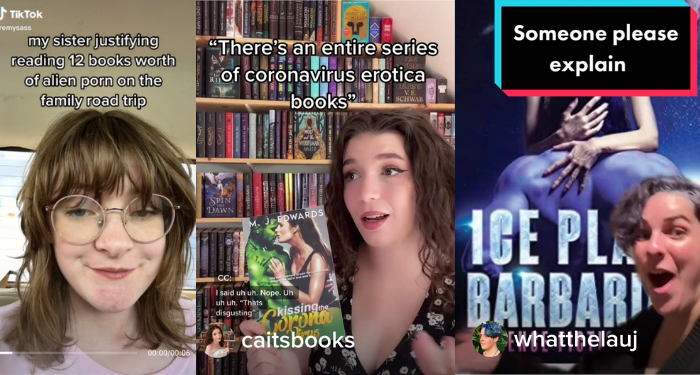 If you have ventured into the world of BookTok for more than a few months, I’d be surprised if you told me you hadn’t encountered any weird erotica. Especially if your venturing happened in 2020. You know, the year when many of us were super stuck at home and had nothing better to do than scour e-libraries to find the strangest, most ridiculous weird erotica out there — and then blast it on social media to be sure everyone else knew such atrocities (or blessings, I don’t judge) existed? But was it just the madness that was 2020 that made TikTok love weird erotica?

When I’m talking about “weird” in this context, I’m generally speaking about erotica that involves nonhuman species in sexual relationships with human or other nonhuman species. Context independent of species can influence the weirdness level, too, whether that is regarding setting, rituals, what happens during sexual relations — the more out of the box, unusual, or strange compared to what we typically see as a conventional sexual relationship, the weirder the erotica. It’s worth noting that “weird” does not equate with “bad” or any other negative term. Simply put, “weird” is outside the norm. And the farther outside the norm you get, the more likely it is the erotica is weird.

Good news, we ask the questions so you don’t have to (you’re welcome). So: Why does TikTok love weird erotica? Video after video on books about people having graphic relations with unusual partners go viral and if you’re not already into weird erotica, you might be left scratching your head over it. What’s the appeal? Are there large groups of people really into the arousing physiques of blue aliens? (Maybe.)

I have another take. The reason weird erotica hits the spot on BookTok is the same reason it finds readership in the first place: it’s unusual, it’s interesting, it makes us curious, and, best of all, it’s taboo.

Think about how often you notice things that are breaks in the pattern. Things that stand out because they are unusual from the norm. You may pay more attention to a book that sticks out a little on the shelf, compared to the ones around it. Your gaze might catch on the person with bright green hair in a crowd of people with natural hair colors. We are, in a sense, programmed to pay a little more attention to aberrations. There are advantages to it, likely evolutionary at their cores. For example, when confronted with the unusual, the more attention we give it, the more we learn about it — the more we learn about it, the better prepared we are to respond appropriately to it in the future.

It is not every day one comes upon everyday erotica in social media feeds, never mind, say, sexcapades involving blue aliens, such as with the Ice Planet Barbarians and its series.

So when erotica — and even moreso, weird erotica — pops up on the For You Page, it’s likely to collect attention. Weird erotica might not be a literal bright red snake we need to study to know whether or not we ought to interact with future weird eroticas/bright red snakes, but the same theory applies. As an unusual piece of literature, we’re naturally intrigued to find out more about it. Given how the TikTok algorithm and For You Page seem to work, it’s just a multiplying, snowball effect from the first few successful watches and engagements, which would both be natural products of viewer interest.

With the videos about weird erotica often by creators who have read the books already (or have done research into them), viewers can use the videos to determine whether the book might be worth further investigation. The videos about weird erotica inspire curiosity. If the creator doesn’t answer the question “why sexy coronavirus, of all things?” then they may pose other questions by way of talking about the book or right out asking questions to prompt the viewer into further investigation. For viewers who decide to read the book, they then may engage with videos they later see about the book, which of course contributes to pushing videos about that book to other viewers. More snowballs. Which I’m sure the ice planet barbarians put to good use.

Perhaps the most compelling reason why TikTok loves weird erotica is that weird erotica is taboo. The nature of TikTok is such that users can interact with taboo content (and thus satisfy their curiosity) without necessarily letting others know that they’re doing so. There’s no requirement to identify yourself in any meaningful way on TikTok. Just like pretty much anywhere on the internet, it’s easy enough to create a burner account, if that’s what you feel like you need to do. The anonymity that TikTok provides to users who are maybe interested in exploring this topic but uncomfortable doing so in a more public way makes it all the easier for exactly that kind of content to go viral.

Of course, not all users feel like they need to keep their name separate from their weird erotica-related activities on TikTok. While there are ways around attaching your face to the fact that you have read weird erotica, some creators embrace the taboo. And given how the content tends to go viral and, consequently, give creators a boost and often a larger following, it makes sense. Humor is a great way to offset any lingering embarrassment. One popular BookTok creator, Cait Jacobs (@caitsbooks) wrote on their blog, “Since I’m already doomed to be known for reading coronavirus erotica, I thought I would share my review here as we prepare to read the sequel coming out on December 11th!”

The other benefit weird erotica gets specifically from TikTok as a platform, is that it makes it easy for users to accidentally encounter it. Users automatically get plausible deniability when weird erotica shows up on their For You Page. They didn’t necessarily seek out the content, and while it’s true that a lot of the content that appears on any given user’s For You Page is informed by what that user has engaged with (or not) in the past, I think it’s also likely that sometimes, TikTok just throws things onto your For You Page just to see what sticks.

At the same time, it’s easy to see why weird erotica might show up on your average book lover’s For You Page. Known for plenty of what many BookTokers simply refer to as “faerie porn,” Sarah J. Maas’s A Court of Thorns and Roses series is massively popular on the app and among readers. Engage with a video about the famed “Chapter 55,” for example, and it’s a fairly logical next step for TikTok to offer you human/dragon erotica. The progression is too easy — watched more than a couple seconds of this video about the book featuring human/dragon erotica? Why not take a look at this video on Kissing the Corona Virus? It happens to be by one of your favorite creators, so you watch it all the way through. And suddenly, you find yourself in a TikTok rabbit hole of weird erotica. Oops!

Now, videos with hashtags like #SmutBook and #WTFDidIJustRead are gracing your feed and the snowball machine that is weird erotica on TikTok just keeps rolling.

Readers of all stripes engage with weird erotica on TikTok, and so it makes sense that you will find varying degrees of taking the literature seriously. Some comment on how the female gaze is well-represented in some of these books and, as a result, are genuinely valuable. Some just like to express shock through humor at how out-there some of the weird erotica concepts and premises are. Whatever the case, there is room for it on weird erotica BookTok.

Or, you know, maybe we all just need some therapy.

Try this list of creators to follow on BookTok for more, and check out this collection of the most popular books on BookTok. And, of course, it’s not a post on weird erotica without a shout out to Chuck Tingle!