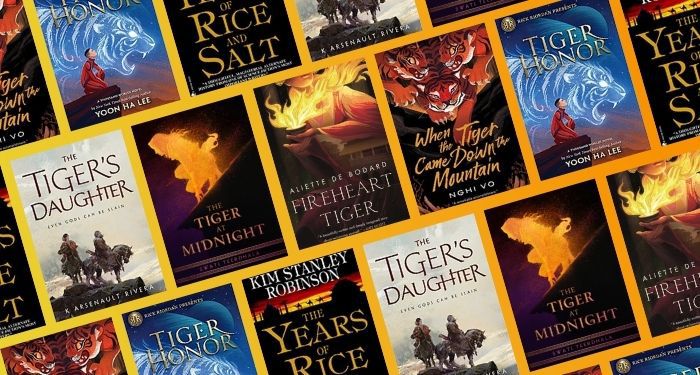 We’re only four days away from Lunar New Year, and then it’ll be the Year of the Tiger. (And the Water Tiger at that!) The tiger isn’t the most common animal seen in in SFF–that award probably goes to horses, cats, and dragons–but there are still quite a few good books to fulfill your tiger needs. When the Tiger Came Down the Mountain by Nghi Vo

A monk confronted by not one, not two, but three hungry tigers needs to buy time if they don’t want to be eaten (and they don’t), so they get the tigers talking, telling the story of a female tiger that fell in love with a human woman. The monk and the tigers each have their own version of the story, but when there are disagreements… it’s probably better to let the tigers win. Tiger spirits… in space. A young tiger spirit joins the space forces because they want to captain a battle cruiser some day like their uncle. But just as they’re accepted into those ranks, that uncle is declared a traitor for supposedly stealing the fabled Dragon Pearl. The only possible course of action is to clear their uncle’s name… but there’s a special investigator on the case that seems intent on making matters even worse. Thanh is the princess of a kingdom that hasn’t been violently conquered, but is in danger of being slowly crushed under the weight of an empire that will colonize them all the same. She spent her childhood “visiting” that empire, where she fell in love with the ruler’s daughter in a romance that’s both deeply unhealthy and definitely not acceptable to her own mother. But she’s made a friend along the way… a fire spirit, who loves her even more fiercely. The Years of Rice and Salt by Kim Stanley Robinson

An alternate history in which the Black Death is far more devastating to Europe than it already was, killing 99% of people there. As with all KSR novels, the scope is an epic expanse of time… and this involves reincarnation, with the characters moving through the eras. And at one point, one of them gets reincarnated as a tiger. The Tiger at Midnight by Swati Teerdhala

Admittedly not a tiger-focused book, but it’s in the title, and it’s a fun book. The story draws inspiration from both Indian history and Hindu mythology, and follows an assassin named Esha, who all others fear as the Viper, who’s given an important mission: taking down a general who contributed to the royal coup that took everything from her. Barsakayaa Shefali isn’t literally the daughter of a tiger, but the story behind how she got that moniker is an epic of war and prophecy and sapphic love that then continues on for two more books. She and the love of her life are the only hope for stopping the incursion of demons that would be happy to consume the world.