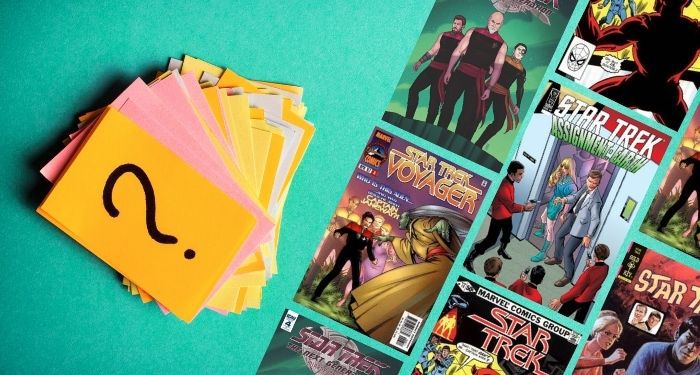 In the past, we at Book Riot have had a lot of fun providing explainers of popular properties by readers who are almost entirely unfamiliar with those properties. (See the links at the end for examples!) These articles were so much fun that I decided to do one myself. For my subject, I picked Star Trek.

There’s just one problem: I have definitely seen Star Trek. I love Star Trek: The Original Series (TOS) with my entire soul. I’ll occasionally watch the films TOS inspired, from The Voyage Home (the one that my old astrophysics professor called “the stupid whale movie”) to the J.J. Abrams reboot (it was fine) to Galaxy Quest (it counts!). I also have a passing familiarity with the characters and premises of the various spinoff series — some more than others.

So how can I do a “never seen” Star Trek explainer when I have, in fact, seen Star Trek? Well, I’m modifying the concept somewhat. I’m restricting myself to Star Trek comics, none of which I have read despite my love of both Star Trek and comics. I picked five covers that struck me as particularly fun and whipped up a little fanfic improv for each of them. This way, we can both not learn about Star Trek comics together!

The first Star Trek comic covers really don’t give me much to work with. Like many licensed comics of the era, they are mostly collages of actor photos. Even when they switched over to illustrations, they often featured a blurb on the cover that gives the plot away, which is unhelpful for my purposes. It took me a while to find this gem, but I’m glad I did.

My first thought was that they’ve been stranded on a planet inspired by American sitcoms (maybe that Chicago gangster planet is causing shenanigans again), which would explain Spock’s doofy Sitcom Dad reaction and the angry lady/Sitcom Wife threatening to beat him up in the background.

But then I realized that’s basically plagiarizing Galaxy Quest (I told you it counted!). So now I prefer to think that it took Spock four years into their five-year mission to realize that he left the water running in his home on Vulcan. The angry woman is an environmentalist who came to deliver the bad news and is mad about the water waste. Kirk is feeling sympathy horror for his boyfriend’s dilemma 🙁

The first few issues of this series were an adaptation of Star Trek: The Motion Picture. Presumably the pacing was somewhat better. They then moved on to original adventures, which was a very excellent decision if these utterly bonkers covers are any indication.

The crew of the Enterprise has decided to celebrate Halloween the old-fashioned Earth way with a costume party. McCoy called dibs on the devil costume and is naturally shocked that Kirk would be so insensitive as to steal his costume idea. Revenge pranks ensue and nearly destroy the ship until a truce is reached: neither of them gets the costume because clearly Spock is more suited to it anyway.

I’m not sure if Spock would agree to that nonsense because it’s the most logical way to get them to hush up or if he would pretend to contract some obscure Vulcan disease and hide in his room until the party is over.

This is one of the Treks that I know nothing about, so I’m spitballing more than usual here. I’m going to assume Janeway and this giant green alien were playing space poker one day and she skunked him, so now he’s back to demand a rematch. The faded-out people behind her are her other poker victims. Hijinks at an interplanetary casino ensure. There are Casablanca references and a Lando Calrissian lookalike for no reason.

I don’t know which Trek this one is set in: I deliberately avoided looking at the synopsis for obvious reasons.

As far as I’m concerned, the two in the normal clothes are the future equivalent of IRS agents here to audit some of the crew’s tax returns due to some funky write-offs (a tribble farm, who knows?), which they are understandably upset about. Then they’re attacked by aliens and the crew uses some of those funky write-offs to save everyone’s lives, so the IRS agents let it slide. One of the redshirts dies of a papercut.

Note: After writing this entry, I was reminded that “Assignment: Earth” is the name of a TOS episode. Is it linked to this series? Probably. The two people in normal clothing look a lot like characters from the episode. But I don’t know for sure. Anyway, my version is better.

Thanks to Ann-Marie Cahill for suggesting I look at this one!

I have been informed that these characters are evil counterparts to the regular ones, but beyond that, I’m clueless. I’m going to guess that evil buff Santa has formed a boy band, hence the lovely matching sashes. They are shooting a music video on some picturesque planet with really nice auroras. They dislike the way the photos turn out and kill the photographer.

Want to learn about other franchises from people who know nothing about those franchises? Check out these articles on Star Wars and Pride & Prejudice!