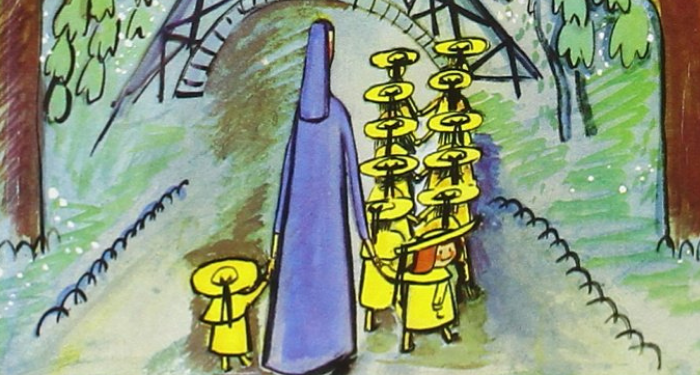 Madeline has been a staple of children’s literature since it was first published in 1939. Despite that, and despite knowing exactly what the cover looks like, I had never read this work, and was intrigued to discover that Ludwig Bemelmans’s signature work is, in fact, a short story in verse. As such, Bemelmans leaves us with more questions than answers.

In an old house in Paris

That was covered in vines

The story is set in the first few pages, wherein we learn that these 12 little girls — probably around age 6 or 7, and remarkably similar in looks and height — live in an old Parisian house, chaperoned by only one adult woman. The children spend their days being indoctrinated to feminine domesticity and order, keeping themselves in two lines throughout their entire day as they traverse the city, in rain or shine. It is unclear at the outset as to why the girls are all living with a single chaperone, but the modern mind assumes it is an orphanage, as no schooling appears to be taking place.

Our heroine is Madeline, the smallest of the girls. Bemelmans illustrates her individuality by describing her fearlessness of mice, her love of winter, and her red hair. These are hardly unique traits — I myself embody all three, even if my hair is dyed — but in an illustrated text, Madeline’s red hair is a way to differentiate her from the other 11 children, who all seem to be brunettes. I am not familiar with the traditional 1930s era dress for boarding school teachers, but the adult, Miss Clavel, appears to be a nun in a habit, and so her hair color is not determined.

One of Madeline’s favorite things to do is to frighten Miss Clavel. One night, the apparently psychic nun wakes, knowing something is not right. The supernatural hints in Madeline are never fully realized, but as this is a series, it is possible this is a long-term hint as to future plot points. It also occurs to me at this point that Miss Clavel must not be a nun, or she would be called Sister Clavel. Therefore the reason for her nun’s habit is also a mystery, and hopefully one that will also be resolved.

Upon checking on the children, it is clear that Madeline is in medical distress. The doctor is summoned, and he diagnoses our intrepid heroine with appendicitis (yet another way yours truly is like Madeline and therefore a heroine). He calls an ambulance and heads outside, Madeline in his arms and the rest of the children and Miss Clavel all in tears.

I caution the critical reader not to apply modern sensibilities to a book written over 80 years ago. Thus, it is important to pause at this point and acknowledge that an attack of appendicitis in pre-1939 Paris would have been of more concern that it is today, with modern medicine at our disposal.

Madeline’s hospital experience seems to have been a positive one, and her surgery is incredibly quick. She wakes up two hours after being taken away from the old house covered in ivy to flowers at her bedside table, in a single room with a view of a park. From this we can surmise that Madeline’s medical care was top tier, although again the modern reader might be surprised to note that her stay in the hospital was a full ten days. At this point, Miss Clavel decides that it is a good idea to bring 11 young children into a hospital to visit our convalescent heroine. Why she decides this is not clear, as we do not have any reference for whether Madeline will be going home yet.

Upon arriving, we discover that Madeline’s Papa has sent toys, candy, and a dollhouse to the hospital room. The children, though, are most impressed by Madeline’s appendix scar, which she proudly stands on her bed to show her friends. This implies that Madeline is much better, so why she is being held at the hospital is also a mystery. One question has been resolved, however: Madeline is not an orphan, so the canny reader concludes that she is at a boarding school whose clientele all look alike.

The children go home with Miss Clavel, and all head to bed. The scene of Miss Clavel waking in the night is repeated, only this time she enters a room full of 11 crying children who all want their appendixes out too. She shushes them, reminding them that they are all well, and sends them back to sleep.

Several plot points are open-ended in this text, and it is unclear what the author is trying to tell us. Is he drawing our notice to the mysterious Miss Clavel’s psychic, or perhaps even magical, powers? Is it possible this is a paean to the French medical system, or perhaps a call for the universal healthcare (established in France in 1945)? It is difficult to know, but one thing is clear: Madeline’s stay in the hospital is not yet over, and one is left with the hope that she will be able to return to her strangely regimented existence soon. Perhaps we will find out in the next book.

If you’re looking for more serious analyses of children’s books, check out: