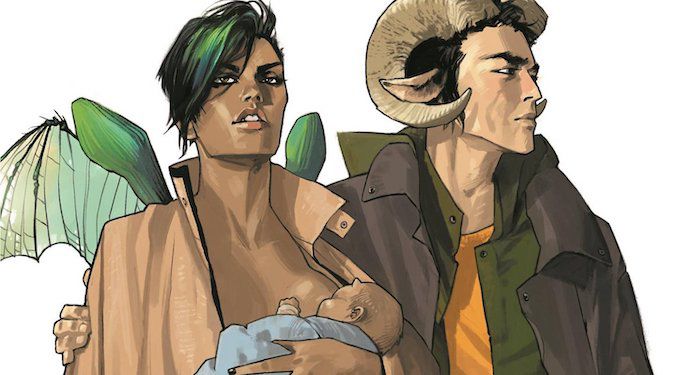 My reading spreadsheet informs me that I first read Brian K. Vaughan and Fiona Staples’s Saga in 2013. I know that I went back and forth between trades, floppies, and digital for several years following; what I don’t know is precisely when I started to fall behind. My best guess is sometime between Volumes 7 and 8, but don’t quote me on that. Regardless, it had been multiple years since I last picked Saga up, and three years since it went on hiatus, when I saw it, sitting there in my local bookstore, illuminated by a shaft of light. Just one copy, as if it was waiting for me: Saga, Compendium One.

I knew that Saga had been on hiatus for a while, but I didn’t realize that I could get All Of It, right then and there. Readers, I bought it! I lugged it home and then proceeded to text friends about it, one of whom expressed disbelief that a book that giant would be physically readable. (I do have to have it propped up on something not-my-hands, I’m not going to lie.) And then a week later, as if it all had been dictated by the Universe, came the news that Saga would be coming back on January 26, 2022.

Like so many other readers, Saga was a gateway comic for me. I had grown up on the cartoon versions of the X-Men, the Justice League, and Batman, had dipped in and out of Marvel and DC runs over the years, but hadn’t really found a series I was dedicated to following until a comics-loving roommate put Saga into my hands (thanks, Ali!). It starts out simply enough: here are two people in love. They’re about to have a baby! But they’re on opposite sides of a war, and The Powers That Be are not happy about it. Hijinks ensue — and then the plot lines gets increasingly complex, more characters are introduced, and the next thing you know you’re five volumes in and yelling about Lying Cat.

Not only was it a comic that had all my favorite things (Magic! Space! Tree spaceships! Family fighting for each other!), but it was an independent comic that had nothing to do with caped crusaders and their behemoth franchises. It led me to other comics and other creators, and also kept me in awe of the massive storytelling project that Brian K. Vaughan and Fiona Staples were building with Saga. So it was with a not-small amount of excitement and trepidation both that I set about my reread.

Would it hold up? What would it feel like to revisit after so long? Especially given the world we inhabit now? I’m glad to report that my reading experience has been both a return to the awe over such an ambitious undertaking, and a real reflection of how I have changed over the course of its run.

The themes of Saga are many, and all intense: the horrors of war and the meaning of peace; racism, prejudice, and bigotry; what it means to be a family, a parent, a friend; how we deal with our own violence and that of others; sex, in all its glorious and terrifying forms. So many horrible things happen to, around, or because of Alana, Marko, and Hazel — addiction, miscarriage, murder, sexual violence, imprisonment, abduction, death and more death. But none of it is taken lightly, and Vaughan and Staples refuse to delineate “the good guys” and “the bad guys” — everyone is as good and as bad as their actions. For me, this is both incredibly frustrating (I just want someone to blame! Make it easy for me, won’t you?) and incredibly important, because in this polarized world I need nuance and perspective now more than ever.

It’s not perfect, and on the reread I found myself noticing some things that rubbed me the wrong way; the extremely limited representation of plus-size characters, for example, especially in the early issues. The amount of gore on the pages is now harder for me to stomach, but at least it feels purposeful rather than sensationalized, deliberate in its grotesquery. The storytelling is still thoughtful and working towards representation; the art is gorgeous and intricate and imaginative; and the characters have tied themselves to my heartstrings and are tugging away. Did I cry actual tears on the last page of Issue 54? Undeniably. Am I mad about it? Big yes. Am I glad I’ve picked it back up? Absolutely.

I can’t help but wonder, though, if it can still be that gateway comic for a new reader. Fifty-four issues is a lot to catch up on, and this is not a comic you could pick up in the middle and have any sense of what’s going on. Unlike some other comics though, what it does have going for it is continuity — there’s one starting place, and it will have one ending place, and gods willing and the creek don’t rise, we know exactly how many issues there will be (108, in case that matters to you!). So to both previous readers and new ones, I’ll say: for my money, Saga is worth the trip and the tears, and I’m counting down the days until January 26.