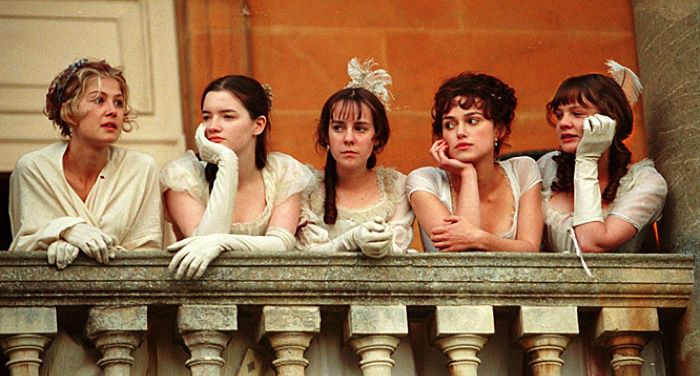 Every time I tell someone that I have never read Pride & Prejudice, I get the exact same response: a slight gasp, disbelief, an awkward smile, like, does she really call herself a bookworm when she has never read Jane Austen?

It is a truth universally acknowledged, that to become a complete reader, you must read Jane Austen. (See what I did there?) As you can tell by the way I started this paragraph, I am obviously not unaware or completely immune to Austen’s influence in pop culture. I have also read Pride & Premeditation, a retelling wonderfully written by our own contributor Tirzah Price that I really enjoyed.

I am, therefore, not going into this article knowing absolutely nothing of the story, I just don’t know enough to be confident that I am actually telling it as it is. Furthermore, although I have seen GIFs, screenshots, and clips, I have also never seen any of the movies or series.

Actually, that’s not completely true. I did watch the most recent 2005 adaptation with Keira Knightly and Matthew MacFadyen in the roles of Elizabeth Bennet and Mr. Darcy, but when I say I’ve “watched it”, I mean it was playing in the background at a small gathering I had with friends, where I also tried to explain why I was so excited to finally see the movie, with incoherent sentences about enemies to lovers and hands touching and flexing. So basically my friends “watched” the movie through my explanations of why I wanted to watch it so much, and I didn’t watch it at all because I was busy explaining why I was so excited to be watching it.

Still, not having read the book or seen the movie, if you ask me what I think of the love conflict in Pride & Prejudice I will get a stupid grin on my face every single time, and screech incoherent thoughts. I am, however, writing this article not to explain to you, the reader, my feelings towards a story in all its forms, but to explain, to the best of my capabilities (and wildest guesses), a book that I have never read. So, let’s begin.

Pride & Prejudice is an enemies-to-lovers romance. The main characters of the book are Elizabeth Bennet and Mr. Darcy (I want to say his first name is Mark, but I’m pretty certain that’s just the case in Bridget Jones which, contrarily to P&P, I have consumed about 20 times). At first, Liz and Darcy hate each other, later they unequivocally fall in love with each other.

The story begins when someone in the Bennet family, Liz’s family, brings word that a very rich man called Mr. Bingley has come to town.

The Bennet family consists of the mother, Mrs. Bennet, the father, Mr. Bennet, and a bunch of daughters. Now, I don’t recall exactly how many daughters they have, but I think it’s a number between five and seven, and although I don’t really know most of their names, I know that besides Liz, our main character, there is Jane, who is the oldest and therefore first in line to get married. Jane is pretty, and kind, and basically perfect, and in the 2005 adaptation she is played by Rosamund Pike.

I cannot think of Pike without thinking of Gone Girl, but in this book I assure you the character is exactly the opposite of the woman from Gone Girl. Mrs. Bennet, however, could probably trick Pike’s character in Gone Girl in her sleep. Mrs. Bennet is the kind of woman who manages to make her husband think he is in charge, while being, herself, in charge at all times. So, in Gone Girl style, when Mrs. Bennet realises Mr. Bingley — rich and handsome — is in town and looking for a wife, she knows she needs to get the engines going if Jane is to marry him. Because, you see, the family doesn’t have a lot of money, so Jane getting married would not only solve the Jane-needs-to-get-married issue, it would also solve the family-doesn’t-have-money issue. Mrs. Bennet comes up with a very cunning plan: she sends Jane into Mr. Bingley’s house — it might not be his house, maybe he is just visiting family, or he bought the house recently (my guess is a good as yours) — but without a carriage, because she knows it is going to be a stormy day.

Now, don’t ask me how she knows this, as far as I am aware there were no weather broadcastings at the time. I’m placing my guesses on a bad knee that probably told her when to expect bad weather. The truth is, Mrs. Bennet is right. There is a storm and Jane walks to the house of Mr. Bingley, gets rained on, gets sick, and has to remain at Mr. Bingley’s house for, I don’t know, a week or something.

Tell me this is not strange behaviour? Gone Girl behaviour, if you will. Your knee is telling you it’s gonna storm, so you send your oldest daughter by foot under pouring rain, knowing she’ll probably get pneumonia at a time when there are no antibiotics, risking her life in exchange for marrying rich. Mrs. Bennet really is an all-or-nothing kinda person. Gotta admire her for that.

Anyway, as wild as this plan is, it works. Jane — the most perfect character in the book, named after the author, of course — recovers from a flu at Mr. Bingley’s house for a week or two and Mr. Bingley, obviously, falls in love with her.

I don’t know exactly when the Bennett family finds out Mr. Bingley has a cousin visiting…oh, wait a minute, I skipped something, didn’t I? First, there’s a ball!

Yes, now, before all the things I told you above happen, there is a ball. And all the Bennett sisters are invited, the whole family actually, and Mr. Bingley is there, and he dances with Jane, and Bingley has a cousin with him, Mr. Darcy.

At some point during the ball, Liz invites Mr. Darcy to dance with her, and he basically is very brooding, and very rude, and refuses because “he doesn’t dance”. Not with that attitude, he doesn’t. At some point Liz and Jane hear him talking shit about Liz, saying she is not pretty and that she is annoying. But, I mean, Liz is above all that, and she doesn’t give a damn about what this conceited fuckboi has to say about her, so everybody goes home from the ball with good prospects for a possible marriage between Jane and Mr. Bingley.

The next time Liz sees Darcy is when she visits Jane at Mr. Bingley’s house while Jane is recovering from her pneumonia, or something similar (she might be slightly faking it, making it look worse than it is because of course her mother’s genes aren’t completely lost on her). Once there, Liz and Darcy have a fight. He is rude again — is he ever not? — and Liz is done with him.

At this point in the story I’m completely lost, so this is gonna be a very short summary of what (possibly) happens: Jane and Bingley seem to be getting along just fine, but suddenly their relationship is off? Maybe Darcy’s sister has something to do with it?

Liz and Darcy also have a fight, and I have no idea what their fight is about, but I have my suspicions: the sexual tension is so high they want to fuck each other, but they can’t, so they try to fuck each other up instead. On top of this, brooding Mr. Darcy does not want to admit to his feelings, which, if you think about it, is really the only issue getting in the way of this whole relationship. If Darcy were to admit having feelings for Liz, there would be no conflict, but there would also be no book, so good for Darcy.

(This was the moment I had to take a break from writing this because I FAINTED, but I am not putting you on hold, I’m back at my keyboard, holding a paper bag I’m breathing into with one hand and typing with the other, I can absolutely do this.)

Then somehow things get well between Mr. Bingley and Jane again. I think they get engaged, and Liz returns to Bingley’s house, and unexpectedly meets Darcy again. At this point they basically figure out they are falling for each other, but they have a fight in the rain under a tree, you can probably cut the sexual tension with a knife, and he leans into her, with a closed fist — not in a kinky way, just in a man-I-love-this-woman-so-much-I’m-going-to-punch-a-wall way — his lips part, he looks into her eyes, and Liz leans into him slightly, but they’re upset with each other because Darcy said shit about her family and Liz said something nasty in response, so he falters just as he is about to kiss her, and GOES AWAY, leaving Liz all by herself!

(I may or may not have had a breakdown just now.)

(Flinging myself into the sun again. This is why I should be kept away from this book, I haven’t even read it and I already CAN’T HANDLE IT.)

Anyway, there are other characters I have a vague idea about, but I don’t know what their role in the story is. There is Bingley’s sister I’ve mentioned before, who is maybe Darcy’s sister. Whoever she is, she is opposed to the wedding at first. There’s a countess of some sort who makes things tough for Liz, but I don’t know how, and there is a friend of Liz’s who’s about to marry someone, and Liz tries to stop her from marrying that guy, but the friend says, “I am 27 years old, I have no money, and no prospects, I’m already a burden to my parents,” and I mean, relatable much?

When it comes to the main plot, though, I don’t really know what else to tell you, but does it really matter? I bet they probably get married and have loads of babies, and when he does something wrong he probably whispers, in way of apology, “you have bewitched me, body and soul…” No, I can’t do this again today, there’s only so many times in a day that I can think of this sentence and stay stable.

I do know that there is a happy ending for Jane and Mr. Bingley, and for Liz and Mr. Darcy. And for Mrs. Bennett, of course. Gone Girl still has between three to five girls to marry off now, but at least the two oldest ones married rich, so the rest of the family can ride on that.

I hope you have found this summary useful, and now if you’ll excuse me, I’m…I’m going to read this book, watch the movie properly, and refill my paper bag stash.