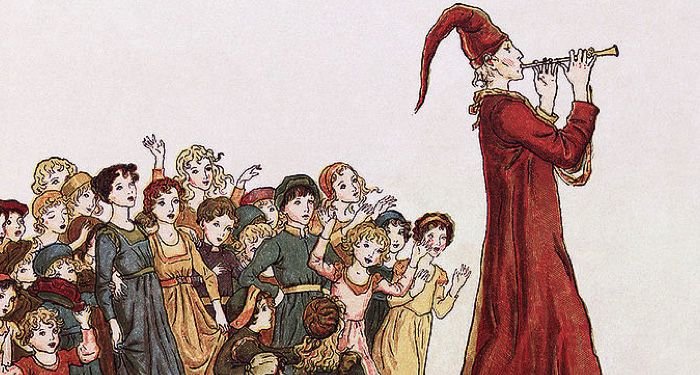 I first encountered the story “The Pied Piper of Hamelin” when I was five, watching a marathon of Saturday morning cartoons. The Silly Symphonies Disney short is from 1933, but it’s an incredibly grim story for a kids’ cartoon in any era. Here’s the basic plot: in the 13th century, a piper wearing pied, or multicolored, clothing promises to rid the German town Hamelin of a rat infestation. The mayor promises him money if he succeeds. He does, but the town now refuses to pay him. As revenge, he hypnotizes the town’s children with his music and leads them away, never to be seen again.

As usual, Disney toned down a folktale whose traditional versions are even more harrowing. Earlier retellings have grim endings: the children are drowned or trapped in a cave or mountain. Disney changed this into a paradise or “Joyland.”  Instead of drowning in the River Weser, Disney’s rats — who look eerily like Mickey Mouse — disappear into a giant cheese wheel.

The Pied Piper story has been translated into over 30 languages. Authors who retold it include the Brothers Grimm, Johann Wolfgang von Goethe, Robert Browning, and Bertholt Brecht. Browning included a moral, warning young audiences never to lie or break promises.

This haunting German folktale may have some basis in fact, but its exact origins are lost in time. Many people assume The Pied Piper is about the bubonic plague, but as the BBC points out, the dates don’t correspond to any known Plague outbreaks. Medieval European towns employed rat-catchers during infestations, but rats carried many other diseases in addition to the Plague. This makes some historians theorize the mass disappearance and rat infestation were two separate incidents, combined into one folktale centuries later.

This theory is plausible. However, it can’t explain the repetition of the specific date June 26, 1284. A plaque on a house called the the Pied Piper House reads: “A.D. 1284 – on the 26th of June – the day of St John and St Paul – 130 children – born in Hamelin – were led out of the town by a piper wearing multicolored clothes. After passing the Calvary near the Koppenberg they disappeared forever.” An entry in the 1384 town records says: “It is 100 years since our children left.”

Today, the legend is a major draw for tourists to Hamelin. It’s inspired a museum, tour guides, plays, and even rat-shaped pastries. Many of Hamelin’s streets still resemble a medieval, folktale setting.

Some historians theorize a large group of children may have died in a landslide at a Midsummer celebration. Or the Piper may have been a “locator” who led residents east as part of a mass migration, which corresponds to historical records. In medieval Low German, the phrase “children of the city” could refer to residents of any age.

In any story about diseases, the disability angle is important. In one theory, the children had Sydenham’s chorea (historically called St. Vitus Dance), an autoimmune disease that causes rapid, uncontrollable movements. Even today, autoimmune diseases are often mischaracterized as psychosomatic or “hysterical.”

At the end of the Disney version, the disabled boy drops his crutches — suddenly cured. As a disabled kid myself, this was the first example of the ableist magical cure trope I ever saw. In earlier versions, disabled children are not cured but left behind. Children who cannot walk, hear the music, see the mountain, or tell its location escape their non-disabled peers’ fate. Ironically, Disney’s attempt to make the story more appropriate for children actually made it more ableist.

As a contradictory symbol of hope and betrayal, the Piper can also be a metaphor for cult leaders or politicians. In August 2021, Miami Beach mayor Dan Gelber criticized Florida governor Ron DeSantis, calling him “the Pied Piper of Covid-19, leading everybody off a cliff.” This may be an inexact comparison, but the point is clear: irresponsibly leading people to their doom during a pandemic.

There are many other references to the Pied Piper throughout pop culture around the world. Crispian St. Peters in the 1960s, Jethro Tull in the ‘70s, BTS in 2017, and other musicians have titled songs after the Pied Piper. Especially during a pandemic, the Pied Piper legend still evokes timeless fears, such as trusting dangerous but charismatic leaders, or children being harmed. Its origins are unclear and contradictory, but the story of The Pied Piper still resonates with audiences over 700 years after its mysterious events.

The Origins of Nursery Rhymes