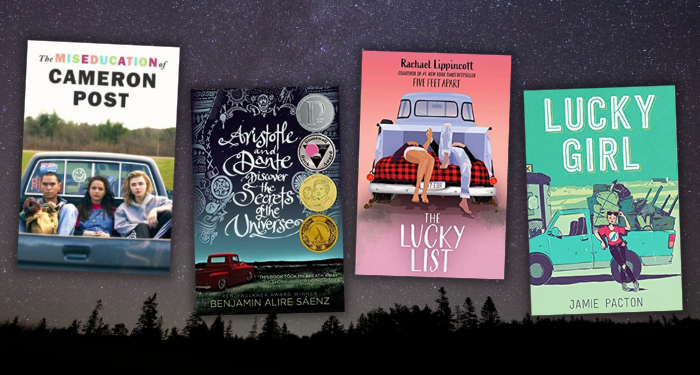 On the cover of Aristotle and Dante Discover the Secrets of the Universe by Benjamin Alire Sáenz, one of the most acclaimed and beloved queer YA books of all time, a red 1957 Chevy truck is parked under a clear sky full of stars. Unsurprisingly, you’ll also see this truck in fan work about the book.

When I read The Miseducation of Cameron Post by emily m. danforth, I was struck by the image of Cam having her first kiss in the back of a pickup truck with another girl. While the original cover doesn’t include a truck, the movie cover does.

Then I picked up Starting From Here by Lisa Jenn Bigelow, which began with the line: “The last time I kissed Rachel Greenstein we lay in the bed of Scarlett, my Ford pickup, watching the sun sink beyond West Lake.”

These are far from the only queer YA books featuring a pickup truck in some way. Sometimes it’s the main character, like in Far From Xanadu/Pretend You Love Me by Julie Anne Peters, or the love interest, like in The Lucky List by Rachael Lippincott. Mara in Like Other Girls by Britta Lundin is saving for a truck, while the main character in Everything Leads to You by Nina LaCour calls an ex to borrow her truck. Lucky Girl by Jamie Pacton is another sapphic YA book that has a cover showing the main character in front of a truck.

So what is it about queer teens and trucks?

Despite the first example I gave, which is an exception, one of the most striking things about this list is that almost all of these characters are white teenage girls. Most of these character also live in a rural area, and many of them are isolated in some way.

Those characteristics go together: characters are more likely to have trucks if they’re in a rural location, and the rural U.S. is generally more white than its cities. Pickup trucks can act as a class indicator: they’re associated with blue collar work, farming, and rural living. Of course, they’re also usually not cheap, which makes them an interesting object to ascribe to the working class.

American teens have associated owning a vehicle with freedom and maturity going back to the 1950s. Cars or trucks allow teens to go off on their own, without their parents having to chauffeur them around. They open up more possibilities, including going places that they may not have explicitly gotten permission to go. But they’re also a tiny piece of privacy: a place that’s just their own.

When home can seem suffocating for a teen coming into their own, their car or truck is a place where they can be by themselves without worrying about a parent knocking on their door. They can have friends or a date with them that might not be allowed in their home, or only allowed with the door open. They don’t have to worry about conversations being overheard.

This is valuable for any teenager, but this freedom may be crucial to queer teens. If they live in an area that is hostile to queer people, a truck or car can be a safe place. It might also be an escape route, and trucks represent this even more than a car would: it seems much easier to toss everything in the bed of a truck — even including some furniture — and then take off than to quickly pack a trunk full of all your worldly possessions.

In the movie cover of Cameron Post, it’s this very escape that’s represented by the image of the three of them in a truck bed. (Spoiler for Cameron Post:) This is the moment when Cam and two of her friends run away from a gay conversion camp, taking their chances anywhere but there.

Relatedly, pickup trucks are seen as a representation of self-sufficiency. For the queer characters in these books who feel isolated, it may be a reassurance that they can make it on their own. Of course, any of these symbols change in different contexts: for many of us, the “friend with a truck” is someone who is giving, who demonstrates interdependence. Maybe the ex in Everything Leads To You likes to be useful for her friends or even uses this value as leverage.

Let’s face it: there’s also something romantic about driving your truck out to the desert and laying in the truck bed with a crush to stargaze and whisper to each other. In a world that can be hostile to queer love, having a tiny space of your own can be life-saving.

From masculinity to safety to freedom and more, pickup trucks in queer YA play a multitude of roles, depending on the setting. I hope that soon, queer teens don’t need to arm themselves with a symbol of escape or self-sufficiency, because they’ll all have such a strong network of support it becomes superfluous. Until then, I expect we’ll keep seeing pickup trucks pop up in these novels, and with the draconian anti-trans laws rolling out against trans teens, I expect that we’ll see more trans YA novels incorporate them, too, or something else to fill the same role.

Did I miss any of your favorite pickup trucks in queer YA, or did I completely miss the significance of them? Let me know on Twitter.