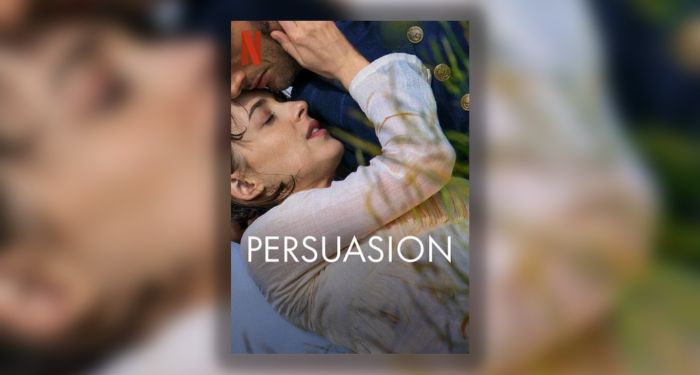 Persuasion and Mansfield Park are the two Jane Austen novels I know the least about. I have a faint recollection of having read Sense And Sensibility in my teens — and I forgot all about it — and I have read a couple of adaptations, including those written by Book Riot’s own contributor Tirzah Price: Pride And Premeditation, and Sense And Second-Degree Murder.

The Austen tale I know best is, of course, Pride And Prejudice: it is the one talked about the most in pop culture, and I have also watched the famous — and, to some, infamous — 2005 adaptation (which I absolutely loved *flexes hand*).

I was called to the attention of the most recent Persuasion adaptation when its trailer came out, a Netflix production starring Dakota Johnson.

Of course, as it always happens when there’s an adaptation of a beloved piece of literature, expectations were high. However, as the movie was released and fans of the book eagerly watched it (online Persuasion watching parties became a thing on social media), the reviews were…not good. I saw so many two star reviews going around that I became intrigued.

It is customary for movie adaptations of books to come up short. This happens for a myriad of reasons, including the fact that a movie, as a medium, doesn’t always allow enough depth to embrace all the contents of a book, due to time and narrative construction.

Especially when we are talking about a classic piece loved by so many, it was bound by default to see several people disappointed. But in the particular case of Persuasion, the reviews were almost all of them cohesive in showcasing their disappointment, with really low ratings.

I haven’t read Persuasion, so I wondered: if this is the rating given by those who loved the book, what would someone who has no care in the world for the book make of it? Well, I happened to be just the right person to answer my own question.

Last weekend I sat down in front of a screen and, knowing absolutely nothing about the book whatsoever (not even through pop culture), I pressed play, hoping to be able to give the movie a fair trial, unattached and untethered from its original form.

And This Is How It Went

There are a few points to note from the start: although this movie has an appearance of a period drama, it is very clearly a modern piece of media. It is, at its core and without a doubt, a millennial creation, with a young audience in mind. The basis of its humour, for starters, will very likely make no sense to people who don’t spend a certain amount of time on social media. A few examples:

1) Anne’s sister, Mary, proclaims herself to be an empath, and yet she is the most unaware person in the room (and, I fear, in the whole world). If you’ve been on TikTok and the algorithm has thrown some of the empath-slander going on over there at you, Mary’s own belief in her empathy will amuse you immensely.

2) At some point, while talking about Mr. William Elliot, Anne says, “He’s a 10. I never trust a 10.” While possibly a sensible claim, it is also an affirmation I doubt anyone over a certain age will utter, and definitely not someone of this time period.

3) Wentworth offered Anne a damn Renaissance playlist (which, instead of the usual cassette, CD, or Spotify playlist, consisted of piano music sheets, and it blew my freaking mind).

A lot of people accused the movie, with Anne breaking the fourth wall several times (like, several times), of being an attempt to copy the famous Fleabag series, written by Phoebe Waller-Bridge; while Fleabag isn’t the first to use this 4th wall breaking format, the series does rely on having a moment with the audience as part of its success (and ingenuity).

In Persuasion, however, I found that this technique went beyond the need to create a more intimate relationship with the viewer: Anne doesn’t just look at the camera in a quick no-words-necessary stance, she looks at the camera while going off on substantial monologues, opening up and confiding with us. I saw this as a brilliant way to remedy perhaps the biggest rift between books and movies: the omniscient knowledge of a character’s thoughts. In movies, we usually see and are shown, not told. But with the use of this trope, Anne did tell us about her worries, her fears, her pains. And we listened.

Another thing very much worth mentioning is character diversity. Period dramas have a tradition of shielding themselves behind the periods they depict as a way to keep a strictly white cast, and I’m glad viewers are calling bullshit on that. Although the main character(s) in Persuasion are still very much white, and cis, several important characters are played by actors of colour. In fact, one of my favourite characters was Lady Russel, a single and free (in all senses of the word) Black woman.

The thing I was the least impressed by was, strangely enough, the central romance between Anne and Wentworth. In my opinion, this was merely a result of a bad choice of cast: Johnson (who I really liked to see in the role), despite her character’s troubles, gives off very indifferent vibes, and not enough infatuation vibes. She seems to be a very self-assured woman, which, paired up with a Wentworth that doesn’t show many signs of having a deep or interesting personality, creates a bit of an imbalance.

There is a scene between both of them at the beach, where it felt as if his love was unrequited, when Anne is also supposed to be very much in love with him. I also felt a sort of strangeness and distance between them, rather than that familiarity that even lovers who have spent too much time apart tend to hold. Also, not nearly enough stolen looks and looks of longing for my taste.

I believe that Anne had a lot more chemistry with Mr. Elliot, who turned out to be a douche (albeit a very hot one). I admit that my perception regarding their chemistry did change closer to the end, as he reveals his true colours, but their first meeting did make it difficult to root for Anne and Wentworth’s rebinding.

Overall, I wasn’t super impressed by the movie, but neither did I think it was a flop. I fear a lot of viewers either missed — or disliked — the millennial take on it, which was a choice I really appreciated, as it made for several fun moments.

It’s an adaptation that does not take itself too seriously, but would have a lot to win with better chemistry between the main characters. When all was said and done, I was still smiling like a fool at the happy ending.

Then again, and here we come to the point of this post, this is the outlook of someone who has no way to compare the movie to the piece which inspired it, and consequently, has no way to criticise it beyond its confines.

On Enjoying Book Adaptations For What They Are

Pride & Prejudice Explained By Someone Who Has Never Read It

A Guide To The Humor Of Jane Austen