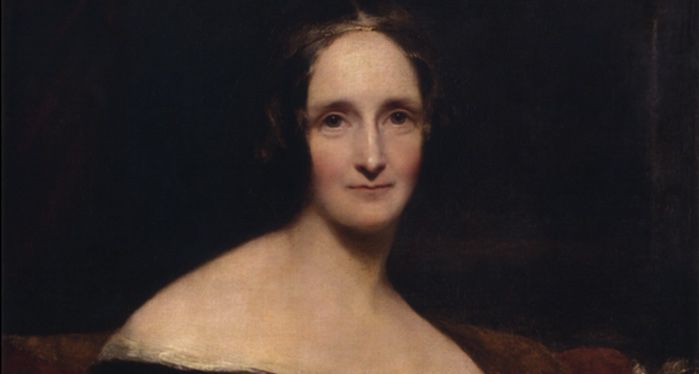 Few figures in history have made more of a cultural impact than Mary Shelley. Her first novel Frankenstein is still a source of inspiration to modern creatives and has lost none of its power to shock and amaze readers. Her legacy is so ingrained in our collective consciousness that we need only hear her name to envision a great green monster. But what most don’t know is that her life story is far more fascinating than her most well-known creation.

Who was Mary Shelley?

Mary Shelley was a literary star from the moment of her birth on August 30, 1797. She was the daughter of Mary Wollstonecraft and William Godwin, both forceful political writers famous for their ideals, revered by many progressive thinkers and reviled by those in the English establishment. By the time she was born, her mother had written A Vindication of the Rights of Man and the famous A Vindication of the Rights of Woman. Her father’s Political Justice drew many literary men to her family home, including Samuel Coleridge and, years later, Percy Shelley.

Mary Wollstonecraft Godwin was named for her mother Mary Wollstonecraft who died ten days after Mary was born. William Godwin never recovered from the loss and even after he remarried in 1801 kept a portrait of his first wife in the Godwin home. His second wife was named Mary-Jane Clairmont. She brought her two children born out of wedlock, Jane and Charles, into the marriage.

Mary disliked her new stepmother and fought with her constantly. Her father, tired of the constant fighting between them and unwilling to intervene directly, sent Mary to Scotland in the summer of 1812 to stay with a friend named William Baxter. Baxter’s daughter Isabella had many similar intellectual pursuits as Mary and they became fast friends. Mary returned to England in November and returned to Scotland the following spring. The next time she returned home was in the spring of 1814. Waiting to meet her was Percy Shelley, a young poet in his early 20s and an admirer of Godwin’s Political Justice.

Mary Shelley’s husband was Percy Bysshe Shelley, a talented romantic poet with unconventional beliefs that enticed born rebel Mary Godwin. His belief in free love and his love of acting the hero to oppressed women made him an exciting, intoxicating man for Mary. He already had a wife and child when he met Mary in 1814 after she returned from Scotland. But neither he nor Mary cared about Harriet or her feelings, and they decided to run away together. Mary mistakenly believed her father William would support her, because he too believed in free love during his youth and early writing career. However, he had since revised his work in favor of marriage and tried to separate the two lovers.

Her running away with Shelley and her stepsister Jane Clairmont would cause a break in their relationship that would last for years. Mary and Percy married after Harriet died by suicide in December 1816. After several years together, Percy Shelley died in a boating accident off the coast of Spezia in July of 1822.

Mary Shelley had five children, but only one survived to adulthood. She gave birth for the first time on February 22, 1815, to a stillborn, premature baby girl. Her second child arrived on January 24, 1816, a healthy boy named William for Mary’s father. Sadly, he died in Rome on June 7, 1819, during an outbreak of malaria. The pair’s third child was a girl born on September 2, 1817. They named her Clara. She too, died during their travels in Italy, on September 24, 1818, less than a year before her brother William. Percy buried her in Lido in an unmarked grave. Mary gave birth to their fourth child, the only one who would survive to adulthood, on November 12, 1819. They named him Percy Florence for the city he was born in. He lived until December 5, 1889. Mary miscarried their last child in May 1822, almost dying of blood loss.

Percy Florence became Sir Percy in 1844 after his grandfather’s death. He married his mother’s choice, Jane Gibson, in 1848. He was not like his famous parents and died childless, but was a good son to his mother and lived with her until Mary’s death in 1851.

Mary Shelley wrote eight books throughout her life as well as articles for periodicals and short essays on literary men for the first-ever Encyclopedia in English. Her books in order of publication are as follows:

Mathilda: Mary wrote her second novel in 1819 and sent her draft to her father to find a publisher in London. He was disgusted with its content and refused to send it out or return the draft. It was finally published in 1959.

The Fortunes of Perkin Warbeck: Published 1831

Mary decided Falkner would be her last novel because public criticism over the years had begun to take its toll on her. After Falkner, her last major work was published in 1844. It was a travel book titled Rambles in Germany and Italy and intentionally written in the style of Wollstonecraft’s Letters from Sweden.

The first accurate biography of Mary Shelley was written in 1951 by Muriel Spark. Many other comprehensive Mary Shelley biographies have been published since. This long wait is due to Mary’s daughter-in-law, Jane Gibson Shelley, destroying many documents that pertained to Mary’s youthful escapades with Percy. She burned diary entries from the period when Claire (Jane) and Percy may have had an affair, and Mary’s reaction to events is lost. She also destroyed pages of Percy Shelley’s diaries. Although Mary had begun the task of erasing Percy’s misdeeds in the works she published about him in her attempt to restore his literary legacy, it’s doubtful Mary would have agreed with Jane’s methods. Diary entries about Mary’s relationship with Jane Williams after their husbands died are also gone. Some historians suggest a possible love affair between them that exceeded the bonds of friendship.

Many of the contemporary reflections on her life gloss over her ground-breaking contribution to science fiction and literary accomplishments entirely. After her death in 1851, The Literary Gazette wrote, “It is not…as the authoress even of Frankenstein…that she derives her most enduring and endearing title to our affection…but as the faithful and devoted wife of Percy Bysshe Shelley.” Despite Jane’s efforts, historians are now able to piece together the facts that have gone unsaid through the words of those who knew Mary and kept up a regular correspondence with her.

Mary Shelley wrote many memorable quotes throughout her life. In her notebook, while in Rome in the winter and spring of 1819, she wrote, “It is a scene of perpetual enchantment to live in this thrice holy city,” In the same entry, “Rome…has such an effect on me that my past life before I saw it appears a blank; and now I begin to live.”

Mary started a new diary in August 1819 after months of not writing a word. She began it with: “I begin my [third] journal on Shelley’s birthday—We have now lived five years together and if all the events of the five years were blotted out I might be happy—But to have won and then cruelly lost the associations of four years is not an accident to which the human mind can bend without much suffering.”

Years after she wrote Frankenstein, Mary said she struggled to come up with an idea for her ghost story. She said its genesis appeared in a dream. She recounted it, saying: “I saw—with shut eyes, but acute mental vision—I saw the pale student of unhallowed arts kneeling beside the thing he had put together. I saw the hideous phantasm of a man stretched out, and then, on the working of some powerful engine, show signs of life, and stir with an uneasy, half vital motion.” However, this story appears to be a work of fiction, as Percy Shelley and John Polidori wrote in their journals in 1816 that Mary went straight to work on her story after Byron proposed the competition.

In a letter to a friend in 1827, she wrote of her mother, “The memory of my Mother has always been the pride and delight of my life & the admiration of others for her, has been the cause of much happiness…I have enjoyed.”

In April 1833, Mary believed herself in love again, this time with a (seemingly) far more reliable man, a politician named Aubrey Beauclerk. After a year of courting, she wrote in her diary in May 1833 “the aspect of my life is changed—I enjoy myself much yet nothing is certain.” Although he had not yet declared his intentions, Mary believed he soon would. However, after Mary fell ill with influenza and had to leave London for several weeks, Aubrey didn’t write or visit her. Upon her return, she learned he proposed marriage to a wealthy, much younger woman named Ida Goring. Mary then began writing Lodore, which became an ode to the men who disappointed her.

Her mother’s and grandmother’s last words were the same: “A little patience and all will be over.” These last words were also said by Mary’s character Matilda when she died by suicide in Mary’s second novel by the same name.

Mary Shelley died of a brain tumor on February 1, 1851. Her contribution to literary history extends far beyond Frankenstein. After Percy Shelley died, she ensured he was remembered for his literary works rather than the political beliefs that marred his reputation during his lifetime. The first collection of his poems were edited and compiled by Mary herself, but she never took credit for her part in it. Her novels brought to life many of the ideas her mother introduced and she proved herself a true daughter of Wollstonecraft by helping the women in her life gain more freedom for themselves. Mary’s contemporaries reviled her and her work during her life and underappreciated her extraordinary talents after her death. In truth, her legacy outshines her husband, her friends, and her most vicious critics.