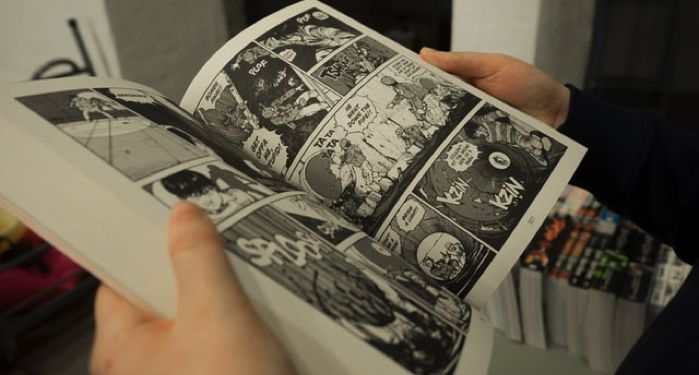 Recently, a few of us in the Book Riot back channels were commiserating about how an upcoming graphic novel was categorized as manga, therefore confusing us all when it simply didn’t follow manga formatting (namely, being read from right to left). A little extra googling led us to find that said graphic novel was “manga-inspired” and left us with even more confusion. Why does U.S. publishing use labels so liberally and inaccurately? What does “manga-inspired” even mean?

I’m not quite cut out for tackling all of U.S. publishing’s problems, but please do allow me to take this opportunity to tell you about the problem with “manga-inspired”…

It means absolutely nothing!

The term, in fact, tells me both everything I need to know, and nothing that I want to know. What I need to know is that whatever this comic is that is labeled “manga-inspired” is not worth my time. What I wanted to know was any actually useful information about it. Though now I don’t need to know that either, since I’m not going to be wasting any more time on it.

The root of the problem is that publishing is a bit clueless, whether deliberately or not, on what manga actually means. So let’s start with a language lesson. Manga is simply the Japanese word for comics, and the common use of it has evolved to be shorthand for comics produced in Japan. In the other direction, we have a term in Japanese — amekomi (literally an abbreviation for “American comics”) — for comics produced in the U.S. So in the same way the Japanese manga industry cannot publish amekomi, the U.S. comic industry also cannot publish manga. The question of where is actually a very important, if not fundamental, distinction here. And to be extra clear: when using these terms, notice there is absolutely no talk of genre yet. I could go on a similar rant about how the U.S. music industry tries to define K-pop as a singular genre, but I will spare you on that front.

So now we know why it’s just ridiculous to label something inaccurately as manga when all it comes down to is a simple yes or no question. Now, let’s get back to that term “manga-inspired” and why I consider it such a red flag.

To call a comic “manga-inspired” is akin to me saying, “Here’s a painting I did! It’s art-inspired!” You’d think (or at least hope) I was joking, right? Because what in the fuck would that even mean?!

I do know what U.S. publishing wants to convey by calling something “manga-inspired.” And I refuse to play along with their game. Because what they want to signal is that this is not your average run-of-the-mill comic, but instead it’s something unusual and exotic and out-of-the-box. (And I hope you know the problem with these descriptors.) They think manga and anime are cool, fun trends they can profit off of, as opposed to huge cultural touchstones that have actual significance and meaning to an entire nation of people.

It’s not bad to be inspired by another culture and borrow aspects of it to make something original of your own. Not as long as you have a true respect and understanding of the culture you’re borrowing from. It’s the classic appreciation vs. appropriation issue. “Manga-inspired” is appropriation. Because manga is, contrary to what U.S. publishing seems to want you to believe, not a monolith. Manga is not a style, nor is it a genre. Instead, manga come in any and all styles and any and all genres. So tell me what style of manga your comic is inspired by. Tell me what genre it falls into. I’d love to know which particular series or mangaka influenced an artist, but without those specifics, I’m not gonna bite.

So, publishing, here’s some homework for you: Learn what manga actually is. And erase “manga-inspired” from your lexicon. Stop encouraging appropriation and fetishization and actually start learning about the rich, wide world of manga. Be respectful! Be specific! Be informed! Because I am not reading your comics otherwise.