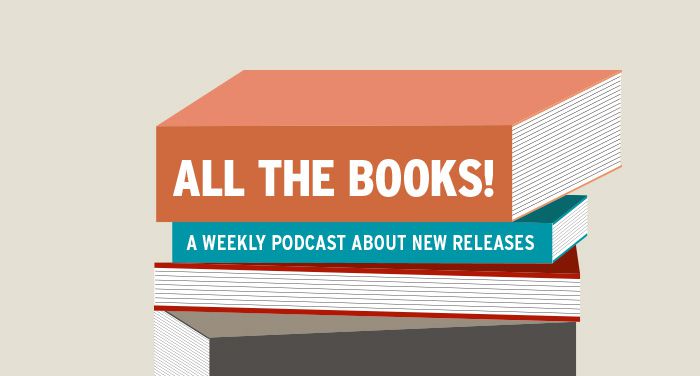 This content contains affiliate links. When you buy through these links, we may earn an affiliate commission.
Episode Archive View All Podcasts

This week, Liberty and Tirzah discuss For Your Own Good, Intimacies, The River Has Teeth, and more great books.

Pick up an All the Books! shirt, sticker, and more right here.

Follow All the Books! using RSS, Apple Podcasts, or Spotify and never miss a  book.

Sign up for the weekly New Books! newsletter for even more new book news.

BOOKS DISCUSSED ON THE SHOW:

For Your Own Good by Samantha Downing

The Dire Days of Willowweep Manor by Shaenon K. Garrity and Christopher Baldwin

In the Same Boat by Holly Green

The Book of Accidents by Chuck Wendig

You & Me at the End of the World by Brianna Bourne

Razorblade Tears by S. A. Cosby

People We Meet on Vacation by Emily Henry

MORE BOOKS OUT THIS WEEK:

Stolen: A Memoir by Elizabeth Gilpin

The Woman from Uruguay by Pedro Mairal, Jennifer Croft (Translator)

The Devil You Know: Stories of Human Cruelty and Compassion by Gwen Adshead and Eileen Horne

Until Proven Safe: The History and Future of Quarantine by Nicola Twilley, Geoff Manaugh

The Cult of We: WeWork, Adam Neumann, and the Great Startup Delusion by Eliot Brown, Maureen Farrell

I Will: How Four American Indians Put Their Lives on the Line and Changed History by Sheron Wyant-Leonard

Come With Me by Ronald Malfi

The Bachelor by Andrew Palmer

El Chapo: The Untold Story of the World’s Most Infamous Drug Lord by Noah Hurowitz

Hot Under His Collar by Andie J. Christopher

New Women in the Old West: From Settlers to Suffragists, an Untold American Story by Winifred Gallagher

The Verge: Reformation, Renaissance, and Forty Years that Shook the World by Patrick Wyman

Better With Butter by Victoria Piontek

Notes from the Burning Age by Claire North

When We Were Young by Richard Roper

The Sinful Lives of Trophy Wives by Kristin Miller

By Water Beneath the Walls: The Rise of the Navy SEALs by Benjamin H. Milligan

Sleeper Agent: The Atomic Spy in America Who Got Away by Ann Hagedorn

The Council of Animals by Nick McDonell, Steven Tabbutt (Illustrator)

These Hollow Vows by Lexi Ryan

The Retreat by Elisabeth de Mariaffi

The Howe Dynasty: The Untold Story of a Military Family and the Women Behind Britain’s Wars for America by Julie Flavell

After the Ink Dries by Cassie Gustafson

A Woman of Intelligence by Karin Tanabe

Believers: Making a Life at the End of the World by Lisa Wells

A Radical Act of Free Magic (The Shadow Histories) by H. G. Parry

The Past is Red by Catherynne M. Valente

The Lights of Sugarberry Cove by Heather Webber

Golden Boy: A Murder Among the Manhattan Elite by John Glatt

Better to Have Gone: Love, Death, and the Quest for Utopia in Auroville by Akash Kapur