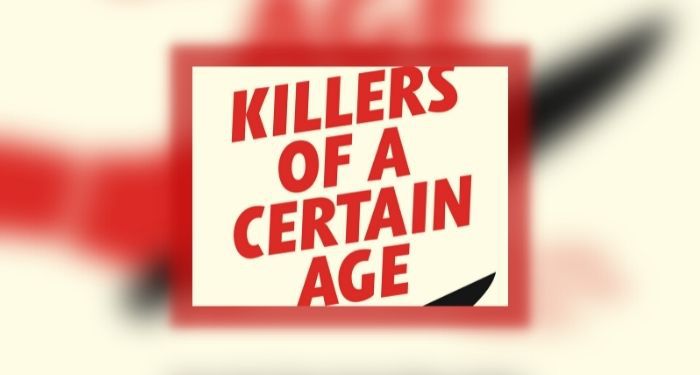 The squeal that I released when I heard that Deanna Raybourn — who writes one of my favorite historical mysteries series (so funny + grump and sunshine pairing!) — was writing a crime book about assassins, could be heard on the moon. I was so excited that the day I was able to get my greedy little hands on an advanced copy I dropped everything and read it. Now you know the danger of consuming a thing you’re so excited about has a higher chance of being disappointing the higher your anticipation is. And mine was high. But I never had any doubts that Raybourn was going to kill this book, because she’s just so funny. I am not only super excited to reveal the cover but to also say that the book met all my expectations and is fun, smart, hilarious, has girl gang vibes (assassin team), and a great dose of revenge.

Check out the awesome cover below by Colleen Reinhart, a synopsis beyond my “omg I loved this to pieces everyone read it” excitement, and read an excerpt introducing you to Billie, Mary Alice, Helen, and Natalie on their first assignment.

Killers of a Certain Age is a witty, action-packed thriller about four elite assassins — Billie, Mary Alice, Helen, and Natalie — who also happen to be middle-aged women. After forty years on the job, the ladies are jet-setting on a retirement cruise…until they realize that, this time, they are the targets. But while older women often feel invisible, sometimes that’s their secret weapon. Watch as Billie, Mary Alice, Helen, and Natalie go on their first assignment (you won’t be able to put the book down!), learn how they got recruited, the organization they work for, and why now they’re the ones on the hit list! These women didn’t spend 40 years training and killing to just sit back; they’re going to come up with a plan and fight back, menopause and backaches and all, they are not going down easy.

Deanna Raybourn is the author of the award-winning, New York Times bestselling Lady Julia Grey series as well as the USA Today bestselling and Edgar Award–nominated Veronica Speedwell mysteries and several standalone works. Her novels blends mystery, history, romance, and have been nominated for myriad awards, including the illustrious Edgar Award.

And now an excerpt from Killers of a Certain Age:

“My mother always says it’s common as pig tracks to go around with a run in your stocking,” Helen says, eyeing Billie’s ripped hosiery critically.

“It’s not murder,” Helen corrects. “It’s an assassination, and you can make an effort to look nice. Besides, they’re supposed to believe we’re stewardesses and no stewardess would be caught dead with torn pantyhose.” Helen brandishes a familiar plastic egg. “I brought spares. Please go change while you still have time. I’ll start the coffee.”

The run is so tiny only Helen would have noticed it. Billie opens her mouth to argue and closes it again when she sees the tightness around Helen’s lips. Helen is nervous and that means her eye for detail is hyperfocused, searching out things to worry about. Better for her to fuss about snagged pantyhose than any of the thousand other things that could go wrong on their first mission, Billie decides.

“Mary Alice is on coffee detail. You go check on Nat,” Billie says, plucking the egg from Helen’s hand. She pops into the lavatory just long enough to strip off her ruined hose and shimmy into a fresh pair, emerging to hear the conversation from the cockpit. Movies again—of course. When Gilchrist and Sweeney aren’t debating the odds of getting Goldie Hawn into bed, they are trying to stump each other with film quotes.

“‘A deer has to be taken with one shot. I try to tell people that, but they don’t listen.’” The pilot waits while his copilot pauses the preflight check, screwing up his eyes in thought.

“Monty Python and the Holy Grail?” he guesses.

The pilot rolls his eyes. “Jesus, Sweeney, no, it’s not Monty Python. Did that line sound funny to you?”

Sweeney shrugs. “It could be.” The copilot jerks his head towards the galley. “Skirt!” he calls.

Billie steps into the doorway of the cockpit.

He pulls his mouth to the side, doing his best Bogart as he looks her up and down. “She missed being beautiful by just a hair, but the voice more than made up for it. It was low and smoky, the sort of voice that ordered whiskey neat and told the bartender to keep the change.”

“I don’t remember that in The Maltese Falcon,” she says.

His expression is outraged. “It’s original! Come on, I make a great Sam Spade.”

“Don’t quit your day job. What did you ring for?”

Sweeney repeats the quote. “What movie is it from? Vance just threw that one out and acted like I’d punched his grandmother when I didn’t know it.”

“The Deer Hunter,” she tells Sweeney. She points to the pilot. “And his next line will be from The Godfather.”

The pilot grins. “How do you know that?”

“Every other one of your quotes is from The Godfather,” she says. She pauses and the pilot gives her an assessing look. She is perfectly turned out, from the crisp, uncreased uniform to the smooth, dark blond hair tucked into a neat French pleat. Her hands don’t shake and her eyes don’t dart around. But she is nervous—or excited. Something is thrumming under her skin, he can almost smell it. And it is his job to settle her down.

“You got this, Billie,” he says in a low voice. “You and the others are good or they wouldn’t have given you the job.”

She smiles. “Thanks, Gilchrist.”

He shrugs. “I’ve given you a lot of shit in training, but the four of you are alright—provided you make it through tonight,” he adds with a heartless grin.

“That’s comforting,” she tells him as Sweeney laughs.

“Just remember the mission and you’ll be fine,” Gilchrist assures her. “Sweeney and I will be keeping the bird steady, so you girls are on your own back there unless something goes seriously to shit.” His expression says it better not, and she promises herself then that she’d sooner open a vein with a paper clip than ask him for help.

“Got it,” she tells him. She watches him for a second as his hands move over the switches and levers, working through the preflight check. He is at ease, loose as an athlete who has trained and drilled until there’s nothing left but the big game.

Sweeney draws her attention by giving her a nudge. “Tell the brunette I want a drink when this is all over.”

“You know the rules. No fraternizing,” Gilchrist reminds him.

Sweeney makes a noise like a wounded puppy. “Easy for you to say. You’ve got Anthea.” He drags the name out on three syllables. “Ahhhhn-theeee-aaaah,” he repeats in a country club drawl.

“You got a steady girl? Good for you,” Billie says to the pilot.

He pulls down the visor to show a small snapshot of a girl with a dark flip like Jackie O’s, a serious expression in her wide eyes.

“And riiiiiiiich,” Sweeney adds in a sulky tone.

“What’s your problem, Sweeney?” she asks.

“I’m jealous, of course. He’s got a rich, pretty debutante and all I’ve got is a stiffy for the little brunette with the curly hair out there.”

“The little brunette has a name,” Billie tells him. “Natalie.”

“The future Mrs. Charles McSween,” Sweeney says solemnly. “At least for this weekend.” He raises a warning hand. “And don’t tell me it’s forbidden. That just makes it more exciting. It’s like they’re daring me to take her out.”

Billie looks from one to the other. “I’m surprised neither of you is chasing Helen,” she says. “She’s the prettiest of us.”

They both shrug. “Pretty, yes,” Gilchrist admits. “Beautiful even. But she’s what we Canadians call a Winnipeg winter.”

“Great natural beauty but capable of freezing your dick off if you’re stupid enough to get naked,” Sweeney explains. He surveys Billie with a practiced eye. “Of course, you would just—”

Billie holds up a hand. “Never mind. I don’t want to know. Coffee is brewing. I’ll have Mary Alice bring you some.”

Mary Alice is pouring two fresh cups when Billie enters the galley. The air smells of burnt coffee and Mary Alice gives her an apologetic look. “I spilled some on the burner.”

Billie waves a hand. “Who cares?” She reaches for the foil-wrapped package of mixed nuts and sticks it into the warming drawer.

Mary Alice nods towards the cockpit. “How are our fearless leaders?”

“Quoting films and trying to decide which one of us they get to take home for the weekend.”

Mary Alice pulls a face. “God, I hate them.”

Billie lifts an eyebrow. “They’re not all bad. Vance Gilchrist just gave me a vote of confidence, a little pep talk for the evening’s adventure.”

Mary Alice snorts. “Only because he’s in charge and if we screw up, it’s on his head.”

“Probably,” Billie agrees. She reaches out and straightens Mary Alice’s name tag. It is printed with the name margaret ann. Her own name tag reads bridget.

Always choose an alias with your own initials, their mentor has told them. At some point, you will be tired or distracted or simply human and you will start to write or say your real name instead of your alias. It is far easier to correct your mistake without arousing suspicions if you have at least begun with the proper letter. Also, it means never having to change your monogram. Remember, ladies, your lives are lies now, but the fewer you tell, the simpler it is to keep them straight.