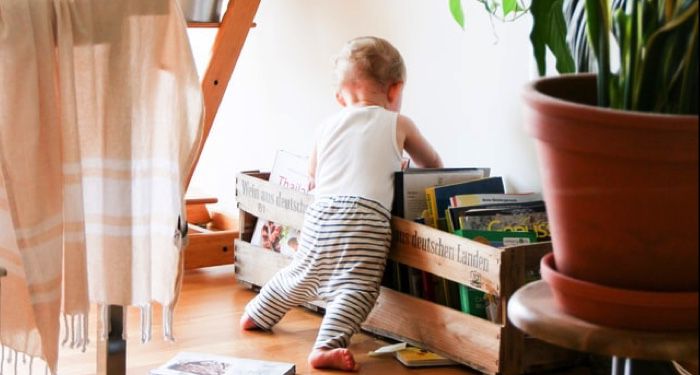 It is a truth universally acknowledged, that a small baby in possession of chubby fingers, must be in want of a board book. However little known the feelings or views of such a baby may be on their first entering the world, this truth is so well fixed in the minds of the surrounding families, that they are considered the rightful recipient of some or another volumes.

By which, of course, I mean that babies love board books, and you, as the board book buyer, have the delightful task of getting to choose exactly which board books. You might choose an old standby, of course, perhaps Goodnight, Goodnight Tenant Farm Site or Guess How Much I Left You a Year, but why waste this chance to instill in your favorite baby a true love of the classics.

And, obviously, by classics I mean the work of the universally beloved Jane Austen, who is perhaps the only author there is, and clearly the work I speak of is Pride & Prejudice, the only work of literature worth adapting.

The trend of adapting classic literature into a board book format seems to have begun with Jennifer Adams and her BabyLit line with her publisher, Gibbs-Smith, in 2011. It, of course, launched with Pride & Prejudice: A Counting Primer, along with Romeo & Juliet: A Counting Primer, which was inspired by a gentleman named William Shakespeare (?), who appears to have written several theatrical plays. A lower form of art, to be sure, but we must allow even the common to have their amusements.

In each of the board books listed below, the authors chose a different tack in their adaptation. Some focused on the story, some used the story to teach children important concepts, and some, shock and horror, used the story to make jokes. Jokes. From our important literature. What utter cheek.

To help discerning shoppers find the very best Pride & Prejudice adaptation, I’ve ranked them from least to most faithful. Note that this is not necessarily a distinction of quality, as all of these books are honorable attempts to bring enlightenment to our youngest pre-readers. 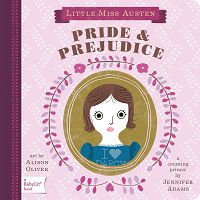 As Ms. Adams did invent the form, it pains me to list her first book as “least faithful,” but my allegiances must lie with you, the buyer. The simplicity of this primer means that Ms. Adams has less room to tell our favorite story, but that same simplicity does make this an ideal book for our littlest children. While our precious angels, so new to this earth, might not be able to understand the complexities of Austen’s brilliant prose, it won’t be long until their faces will light up with delight at such ideas as “2 rich gentlemen” and “4 marriage proposals.” (Ms. Adams also wrote Emma: an Emotions Primer and Sense & Sensibility: an Opposites Primer) 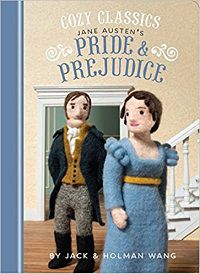 You may think that the spareness of the text would have caused me to rank this book as less faithful than others, but, in fact, that same spareness of the text allows the illustrations to shine. While each page only lists one word, you are directed to photographs of remarkably detailed felt sculpture of Elizabeth Bennet, Fitzwilliam Darcy, and more. As a person who does not often find themself visiting the cinema and who has, in fact, only seen one film and, of course, one very long BBC miniseries, I found the small felted person’s resemblance to Matthew Macfadyen to be quite remarkable, bordering on miraculous. Anyone who can convey quiet longing and long suffering with a bit of sheep’s wool must be commended. (Author and illustrator team Jack Wang and Holman Wang also produced an adaptation of Emma.)

This delightful book calls itself a parody, rather than an adaptation. While I agree that it isn’t quite a thorough adaptation, it is quite soothing and bids “goodnight” to all of our favorite characters and locations. “Good night hopeful / good night pretty / good night fine eyes /and good night witty.” What poetry! About our book. I mean Jane Austen’s book, of course. I shall buy a copy for every night of the week to read to myself before bed. Imagine! Me, owning a second book. 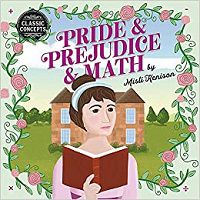 The description of this book spends much energy touting that it is STEAM-based, leading some of our audience to believe that it is powered in the same manner as the locomotions that now crisscross our beautiful countryside, but it appears to be an acronym that refers to the very same maths that are referenced in the title! This book uses mathematical concepts to explain slightly more in-depth concepts from the plot of the book, for example: “Mrs. Bennet had 5 daughters at home, until Lydia ran away. Now she has 4 daughters at home” and “Pemberley is a larger house than Longborne.” Sad truths, some of these, but truths all the same. 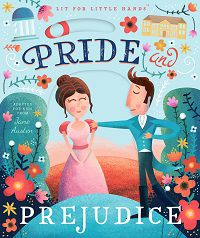 Now, if you take the text and the illustrations at face value, well then, this is quite a nice little adaptation! Characters are given Jane Austen’s own words to speak, and this runs along with an abridged version of the story for young readers. I’m afraid, though, that the extra features in this book, well, they give me some pause. There is much tugging and jostling, and, well, these things just aren’t done. In fact, on the very cover of the book, there is a mechanism that allows the reader to nudge our own Elizabeth Bennett toward Mr. Darcy in something that resembles an embrace! While other elements are quite charming, such as a fold-down letter that allows you to read Mr. Darcy’s letter to Elizabeth, and a spinning wheel that, on one side, allows you to spin dancers at a ball, while on the other side allows you to read more dialogue written by Austen, I simply cannot support something that encourages such failures of propriety. Dear me. 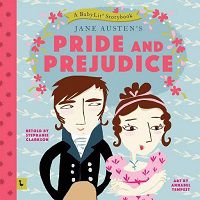 Ah yes, Babylit, we meet again. They invented the format, and they did master it. While their line of primers gives the very tiniest of our offspring a taste of the major works of literature, their line of storybooks shares our beloved stories with those young ones whose attention spans have expanded beyond short lists of items sorted by number or color. This 30-page board book has enough room to explore the complexities of the saga, and Anabelle Tempest’s whimsical illustrations add some enjoyment, but not too much, to this pleasing retelling. As in other adaptations, the illustrated characters are given Jane Austen’s own words in quaint bubbles of speech. It is a worthy retelling, and one that I am sure will cause dozens of moppets to gather ‘round your knee, eager to hear this, the finest story the English language has to offer.

I do so hope you’ve found this list of board book adaptations to be helpful as you work to educate the bantlings in your care. I, myself, have been quite energized by this ramble through the lower shelves of the library, and have been inspired to expand my own literary horizons. Perhaps even tomorrow, I shall find myself a new book. After reviewing the vast options at hand, I have chosen — what else? — Sense & Sensibility.