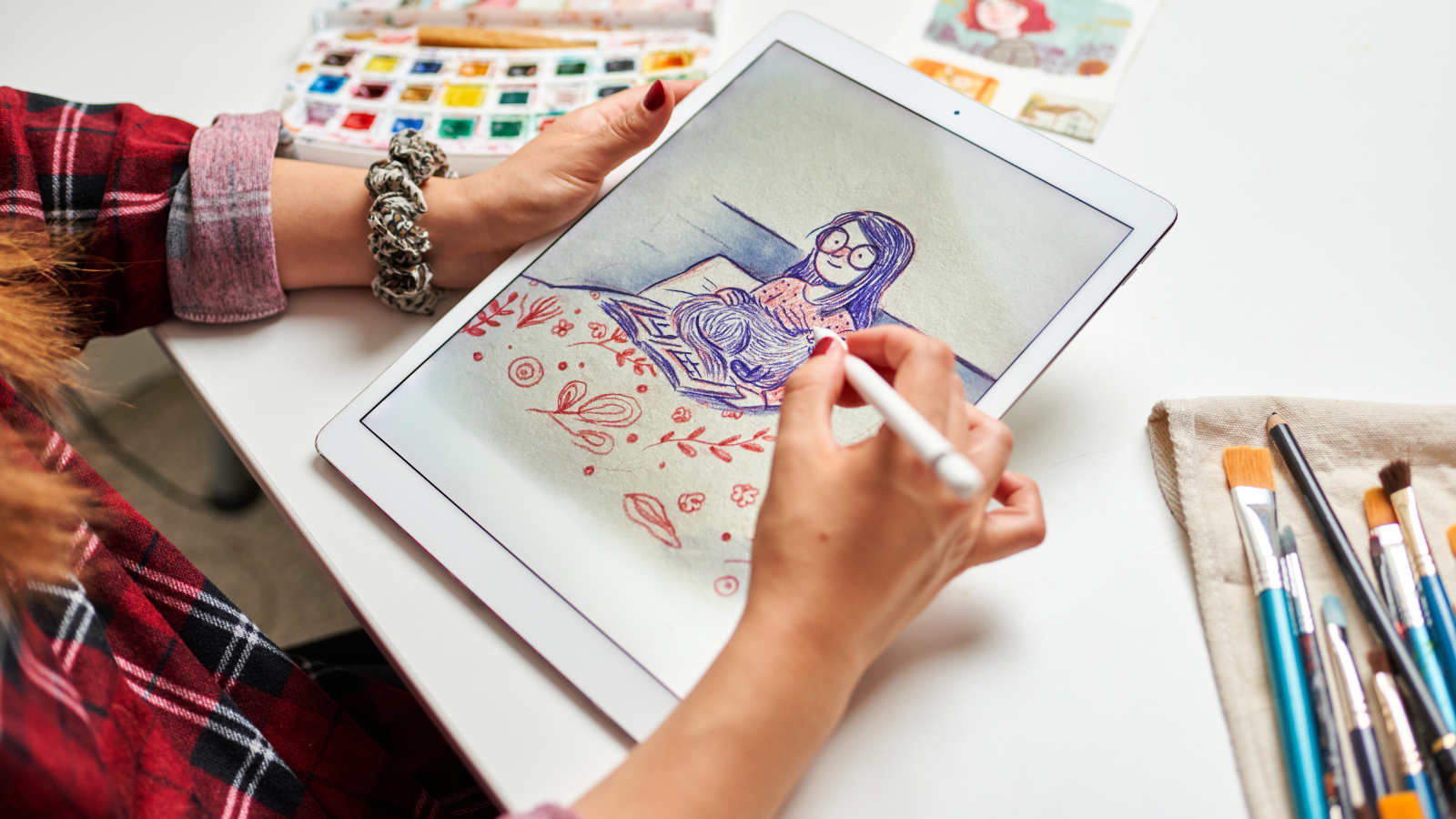 While there are many brilliant single-creator comics and graphic novels in the world — think Neill Cameron’s Mega Robo Bros, ND Stevenson’s Nimona, and Marjane Satrapi’s Persepolis, among others — many graphic novels, both traditionally published and indie, have separate writers and illustrators. Sometimes, the writer and artist work as a long-collaborating team, like René Goscinny and Albert Uderzo, the duo behind the Asterix comics. Some artists are approached directly by authors as the best fit for a planned work, as happened with The Adventure Zone comics, where illustrator Carey Pietsch drew fanart of the series long before the McElroys began converting their popular podcast into graphic novels. In other cases, writers and artists are paired up by publishers for a specific project, something frequently seen in Marvel and DC comics, or sometimes in comics produced outside of the “Big Two’s” sphere, such as Frizzy, a new graphic novel written by middle grade author Claribel A. Ortega and illustrated by Rose Bousamra.

My own work in comics has followed the Goscinny-Uderzo model (although focused around metafictional faeries and anti-fascist magical girls instead of indomitable Gauls). I have three webcomics with my best friend and co-creator Emily Brady — I’m the writer, she’s the artist. We’ve been working on these comics since 2004, and one thing has been very clear to me since the beginning is that for all my procrastination, faffing around, and grappling with writer’s block, the writing side of comics takes no time at all compared to the huge number of hours required to produce the art. We have seven substantially-sized print volumes to show for our 18 years working on these comics, a very respectable number — but to people outside the visual medium of comics, used to working in the written-word-only side of publishing, seven books in nearly two decades looks like a small amount.

The number of hours it takes to produce a 200-page graphic novel is a point repeated by many comics illustrators who have spoken out about the unreasonable time expectations that artists often face when working for publishers, particularly those publishers who are primarily used to working on novels. In her article “Graphic Novel Production Schedules Are Too Short — and the Publishing Industry Should Care About It“, Nilah Magruder notes that “the average graphic novel is 200 pages, but it’s common for publishers to offer a year, sometimes even less’ — a huge ask which puts the illustrator in a perpetual state of crunch.

Magruder explains, “When I entered the children’s book industry, six months was the average timeline for illustrating a 32 page picture book. Let’s say I were to expand that 32 pages to 200 pages. The schedule to produce that gigantic book would be a little over three years,” which is a stark difference from the short timeline that so many publishers require.

Magruder’s article breaks down the amount of time and effort that it takes to produce a comic, something that many people without direct experience of working in this medium rarely consider. One comics professional I spoke to noted that “much like people who grimace when receiving a jumper Granny knitted for them for their birthday, [readers and publishers] never realise how much time and care has taken into making something.”

Artist Woodrow Phoenix (Crash Course, She Lives, SugarBuzz!) agrees, telling me that “people definitely underestimate how long it takes to draw a graphic novel. Partly because they can read them so quickly, and partly because they don’t want to pay the amount that it actually would cost if you broke it down page by page. The idea that it might take somebody four or five years to draw a 200 page book is appalling to many people I’ve talked to…It’s hard to get rid of the idea that writing is skilled, ruminative hard work, but drawing is easy, messing about making pretty pictures, and therefore doesn’t need to be rewarded with any serious remuneration because you’re having fun all day.”

This lack of remuneration was a problem mentioned by many artists, as it works out at much lower than minimum wage; I spoke to my co-creator Emily Brady, who said, “when people commission and expect a page rate of something like £15 per page for a piece of work that might take up to eight hours, it’s easy to get downhearted.”

The impact of tight deadlines on an artist’s health is something else of great concern to artists. The comics professional I spoke to stated that “people who make comics can also suffer because we can plan and be as passionate as we can about making of comics, but it is impossible to quantify future energy levels, what random life stuff will throw at us, will we need to take on extra shifts, will we become ill (sometimes permanently).”

In her article, Magruder points out that “Drawing requires long periods of repetitive movement cycling from the shoulder down through the arm and wrist…My body was up to it at the start of my career, but after 10 years, the strain is taking its toll.” She is far from alone, judging by the number of times I’ve heard comic artists swap tips and advice on the best way to set up your chair and desk to minimise the inevitable long-term back, hip and arm pain.

The impact of this can affect an illustrator’s ability to work; as many are freelancers, they may not have health insurance, and, even in countries with free healthcare, they will need to take unpaid time off work to recover from any work-related health issues. Ironically, some artists may go into freelancing in part because of chronic health conditions that make working a 9 to 5 difficult, only for crunch deadlines to exacerbate their medical issues or cause new ones.

On top of this, artists may be doing all this work with very little in the way of recognition. Brady noted that “When visual designers take cues directly from a graphic novel, using the original work like a storyboard, it’s rare that the artists involved get the credit.”

Smith agrees: “It’s more a problem in the picture book industry, but illustrators are still left off of cover credits, and folks forget to mention us in social media or news posts about the books when they’re announced, or if they win awards. It would be nice to be remembered more!”

Picture book illustrators have been fighting a similar fight; in the UK, artist Sarah McIntyre created the #PicturesMeanBusiness campaign to fight for illustrators to be credited; however, there is still a long way to go. When I spoke to Phoenix, he told me about a recent example involving a well-known publisher:

“Just last month the book produced by Dorling Kindersley for the Queen’s Platinum Jubilee had NO credits for the artists OR writers except a sentence saying ‘you know who you are’ at the back. I don’t understand the thinking there. Bad enough this laziness is insulting to the people who actually make the content DK sells, but that attitude also loses them potential sales from readers who would like to see what else these people have created.”

This is one of the major issues with lack of credit; artists are missing out on a chance to be picked up for future work by clients who enjoyed their work and may have wished to commission.

Going forward, what would illustrators like to see from the publishing industry in terms of credit and support? The anonymous creator I spoke to answered that “for a co-operative product, a sub header on the front of a graphic novel would be the ideal solution, underneath the writer’s credit — and if not, on an inner cover, and/or on the back cover. Basically anything that makes an effort is more than what many publishers offer as crumbs today. Illustrators should also get a royalty if the writer does — often artwork is commissioned for a flat fee.”

Phoenix had a similar wish for greater credit given to illustrators: “There is still this perception that the writer creates the Great Work and the artist simply turns up and puts a pretty bow on it. The reality is an idea is split into visual and textual parts that depend on each other, one can’t work without the other and the publishing industry (especially the publicity departments) should be educating the public about that.”

Longer deadlines and more flexibility would also help artists continue working without risking their health; in her article, Magruder calls on publishers, agents, and writers to familiarise themselves with the workload involved in producing art for comics, and to adapt deadlines and practices in response to this. Avoiding crunch is crucial, and as long as there is clear communication to any readers waiting for the product, unlikely to come with backlash — I recently backed Action Fiction’s Monsters of Murka Kickstarter, and when Action Fiction extended their deadline in order to take pressure off the artists, the response from backers was largely positive.

Comics and graphic novels are, first and foremost, a visual medium: while good writing is important, the artwork is crucial, and the artists shoulder the majority of the burden of the work it takes to produce a completed comic book. Hopefully, as comics and graphic novels become increasingly part of the mainstream, the workload of illustrators will be given more consideration, and artists will be given the credit they deserve.

For another look at the links between comics and health, read our article on How Comics Discuss Mental Health. To look at comics that focus completely on the art, check out Silent and Wordless Graphic Novels to Render You Speechless.