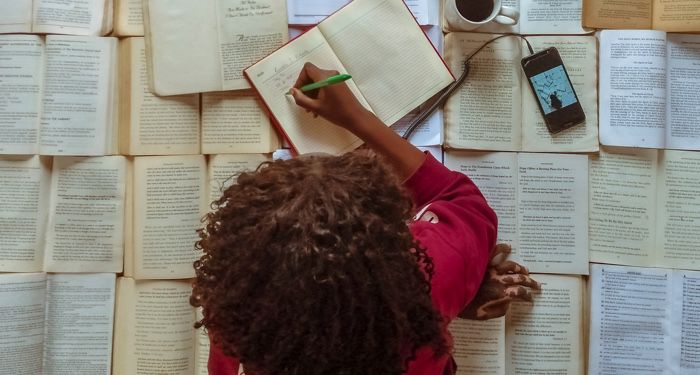 If there is one question authors face time and time again, more than probably any other question, it is surely “How do you get your ideas?”

Harlan Ellison famously answered a similarly phrased question, “Where do you get your ideas?” with the breathtakingly simple “Schenectady.”

Of course, we don’t all bum around upstate New York looking for writing ideas, so — not wanting to add my voice to the many already asking — I scoured blogs, FAQs, interviews, and everywhere else I could think of to see what answers authors have already given to the eternal question, “How do you get your ideas?”

Neil Gaiman, author of Neverwhere and Coraline, is asked so frequently that he wrote a whole essay on the question. In it, he says:

Courtney Milan, author of The Duke Who Didn’t and Trade Me, includes this extremely relatable answer in her FAQ:

I get lots and lots of ideas all the time, and I can’t shut them up. But one idea is not a book. So I have an idea that’s like, “I know, my heroine is going to have X.” And another idea that’s like, “A woman and a man both want Y.” Eventually, my ideas collide into each other, and once I have enough ideas sticking together, it feels like a book.

In an interview for her book A Room Away From The Wolves, Nova Ren Suma said:

I’m not sure I go looking for ghostly and strange inspiration for my stories — it just keeps on finding me. I honestly don’t like to be scared in my usual everyday life and would prefer to keep the creeping otherworldly fears and scares on the page only, but if you have an eye open to it, you’ll find supernatural inspiration everywhere. Almost as if it follows some of us.

Mercedes Lackey, author of the Valdemar series, once said:

Once you are in the habit of getting ideas, they come to you without thinking about them. If anything, you have too many ideas. They can come from anywhere and anything, but basically, they derive from looking at even the most mundane of things or events and asking yourself the question, “What if….”

The late author Joan Aiken, who wrote The Wolves of Willoughby Chase, wrote:

One needs to be always on the lookout – It is a case of selection of suitable ingredients out of the mass that flows past every day – things said by people, overheard conversations, things read in the papers, heard on the news, seen in the street…

Ideas and inspiration come from everywhere. Sometimes it’s music I’m listening to, or sometimes ideas will be sparked when I see movies or read books (I especially love biographies)…I have also used my own experiences, or things I’ve seen on the news.

Christine Hyung-Oak Lee, author of the memoir Tell Me Everything You Don’t Remember, wrote about ideas as part of the creative process:

The creative process is oftentimes a black box. It’s not exciting to describe–as it is purely about work. […] So much of it is also about waiting.
It is about showing up on the steps each day to greet the Muse, should she choose to stop by. You sweep the steps, waiting. Sometimes the Muse does not come by. Oftentimes, the Muse makes no appearance. But if you are not on the steps, and the Muse DOES come by, then you miss her. So you wait. You sweep.

KJ Charles, author of Think of England, wrote a short essay about inspiration:

I chewed a pencil, went for a walk, and stared into the middle distance a bit. Eventually a name popped into my head.

The way I get ideas is that they pop into my head at the oddest times. One of the places that ideas come to me is while riding the subways in New York City.

Stephen Graham Jones, author of The Only Good Indians, wrote about why he writes and touched on inspirations:

I’m usually working on more than one book at a time. When the ideas stop coming for one, I move on to another one.

Some authors have fewer ideas. Alix E. Harrow, author of The Once and Future Witches, wrote in her newsletter about her lack of ideas:

the thing about ideas is that i don’t have very many of them.
people don’t believe me when i say that. they laugh, the way you do when someone is pretending to be modest and you aren’t buying it. but it’s the truth: the number of ideas i’ve had is exactly equal to the number of stories i’ve published. there are no trunks full of drafts, no notes apps overflowing with inspiration, no unwritten books rustling in the wings. there’s just whatever i’m working on right now, followed by a blindingly blank page.

The great Toni Morrison said, in a 1979 interview:

I remember seeing a friend of my mother’s when I was 4 or 5 years old, and I don’t know anything about that woman except her name and the way she looked. But there would be a flood of things that I attached to her, and I suppose that I could say that I used her for part of a character. I don’t know a thing about that lady except what her name was, but what I remember is the way they said her name, the way the women said her name, so I knew as a child that she was different. They said it with such stuff—they had some strong reaction to her that was part awe and part disapproval and part affection. I don’t know a thing about that lady, and I haven’t asked anybody about her, but I remember her face, and mostly this part around the eyes. So those are shreds, but that’s all you need to build somebody like Sula or Hannah.

When asked about the impetus for She Walks in Shadows, the all-women Lovecraft-inspired anthology, author and editor Silvia Moreno-Garcia named Facebook:

Do girls just not like to play with squids? That’s the question an editor asked on Facebook, wondering about the lack of female writers in his TOC. What followed was a long discussion on Lovecraftian fiction and women, and the need for an answer.

I thought about what I would want to read if I was in my teens now, in this current climate — what I would be worried about or could possibly be stressful for me. I was looking at what’s happening in the world now, and I’m like, oh, this is a lot of people not calling things what they are, not calling monsters monsters, not calling evil evil, or not calling white supremacists white supremacists. And I thought, well, what does it look like if you’re a young person and it’s this mass gaslighting, where everyone’s just like everything’s fine, nothing to look at here and you’re like, but did you see what I just saw?

Likewise, Helen Hoang told EW about the initial spark for The Kiss Quotient:

I’d been reading this anthropological piece called Night Work — it’s about hostess clubs in Tokyo. My friend’s an anthropology major, and I thought it was fascinating. I wanted to write about someone in a similar profession, which immediately brings up Pretty Woman in my head. Also, I’m really drawn to anything that’s thought of as taboo or bad because I always feel there’s a compelling reason behind these things, and I always want to see if you were in this person’s shoes, would you feel it was wrong?

But I think N.K. Jemisin, Hugo Award–winning author of The Fifth Season, said it best:

Is there a difference between how writers get their ideas and writers’ processes? Between ideas flowing and the well drying up? I think there probably is not. The things that inspire us, the way we do the work, and the very concept of ideas are all interlocked concepts, and not necessarily definable. As Lucas says in Empire Records, “Who knows where thoughts come from? They just appear.”