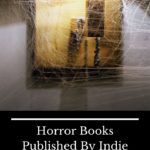 This list of horror books published by an indie press for the 2020 Read Harder Challenge is sponsored by TBR: Tailored Book Recommendations.

Hardcore bibliophiles know that indie presses are where it’s at when it comes to finding new books, especially for horror fiction. The underground horror indie scene has some killer (heh…get it?) titles that are just waiting to be discovered, so take a look at these books and their publishers, and get ready to find your next favorite scary read!

You may not automatically think of poetry when you think of horror, but you really should check out the dark, surrealist poetry of Linda Addison & Alessandro Manzeteti, both of whom have won Bram Stoker Awards for their collections. (In fact, Linda Addison is the first African American winner of the Bram Stoker Award and was given the Lifetime Achievement Award from the Horror Writer’s Association in 2017, so you know she’s legit.)

Ania Ahlborn’s name has become pretty well known in the world of mainstream horror publishing, but before she was picked up by Simon & Schuster, she was a self-published author and Seed was her first novel, following a father and his daughter who try to outrun the demonic darkness hiding in the treacherous swamps of Louisiana.

We Sold Our Souls by Grady Hendrix (Quirk Books)

In the ’90s, heavy metal band Dürt Würk was poised for success until lead singer Terry Hunt left the band to pursue a successful solo career. Years later, former Dürt Würk guitarist Kris Pulaski is tired, broke, and unhappy, but then she learns that Terry’s meteoric rise to stardom may have come at the price of Kris’s soul. So what else is left for Kris to do except embark on a cross country road trip to reunite with the rest of her band and confront the man who may have sacrificed her to the forces of evil?

On his way home, enforcer and drug dealer Fernando is thrown into the back of a car by a few heavily tattooed gangsters and taken to an abandoned house where he is forced to watch them feed his friend to something inhuman. Fernando realizes that he’s caught in the middle of a supernatural territorial battle, and with the help of a Santeria priestess, a Russian hitman, and a Puerto Rican pop singer, he prepares to face down a superhuman gangbanger.

Stephen Graham Jones is another well-known name in the horror world, but earlier in his career, he was publishing via the indie press route. The Last Final Girl is the author’s love letter to ’80s slasher movies, and is written almost in a screenplay format, with scene cuts and POV changes galore. If you’re a horror fiction or a horror film aficionado, you’ll want to check this book out.

1980: Phoebe and Jacqueline have just graduated from high school in Cleveland and are facing a terrifying, uncertain future. But what’s even more terrifying is the fact that the girls that Phoebe and Jacqueline have grown up with are changing. Their bodies are wasting away and their bones are being exposed like corroded metal. Soon people from all over are coming to see and speculate about the “Rust Maidens,” but Phoebe realizes that this is just part of a larger, darker force preparing to tear her neighborhood apart.

Charley Winslow’s friends are disappearing from The Old Cross School for Boys, and when he sees a terrifying grey figure stalking the halls at night, he’s told that it’s all in his head. But when Charley discovers a pool of blood behind a false wall, he finds himself in the middle of a dark, hidden scandal and a family’s legacy of murder and madness. This is an atmospheric, haunting novel with absolutely gorgeous writing.

The Finch House has been left abandoned for decades, but all that is about to change when bestselling horror author Sam McGarver is invited to spend Halloween night in one of the most haunted houses in the U.S. Joining him are three other authors, but strength in numbers may not be enough as the evil lurking inside the Finch House threatens to make them a part of its bloody legacy. The story takes a little time to rev up, but hold on to your butts once it gets going.

Of course, this is just the tip of the indie horror iceberg. Want more suggestions? Check out some other titles with 7 Indie Horror, Mystery, and Crime Novels for Music Lovers or 10 Creepy, Captivating Horror Poetry Collections.