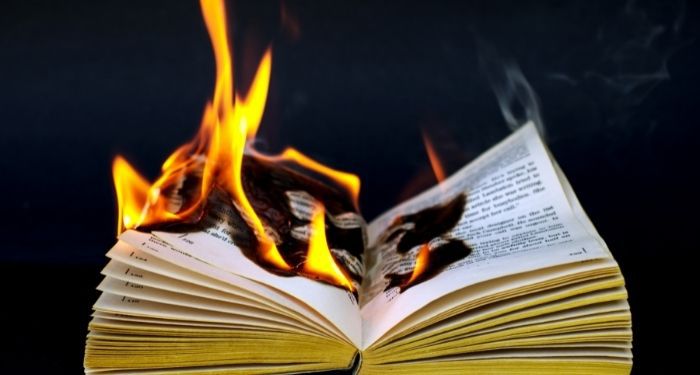 Two years of pandemic living — whether or not best practices were followed — has left an entire generation trying to navigate what life looks like as we try to shift from pandemic to endemic. We’re not there yet and we won’t be for a while, but the changes in our social lives have absolutely made an impact on how we engage with others.

It’d be inappropriate to draw a line from pandemic isolation to pro-censorship groups. There is a line, but it’s not necessarily a straight one. In fact, there are no straight lines anywhere when it comes to today’s censorship culture. Groups like No Left Turn, Moms For Liberty, and any other “parental rights” focused organizations popping up across the US are uniting under the idea that they as parents have not had the right to see and dictate what their children are learning in school. There are several purposes behind these movements, including a push for vouchers and school choice. Another element to this is the belief among these adults that schools are teaching Marxism, and Marxism is tied up on Alfred Kinsey’s sex research. It’s also connected to critical race theory and social emotional learning, and ultimately, school indoctrinates young minds to become queer if they’re not and/or hate themselves if they’re white.

Parents have always had rights. School board meetings have always been open to the public. But because of how the pandemic forced parents to pay more attention where before they never had to, many found the connections with other like-minded adults gave them a way to rally together behind a cause. They’ve turned to local school boards to stand up for what they believe are just causes.

But these school board meetings have turned into something else, too: an opportunity to be a hero. The louder, the more outrageous, the more backed-by-others-in-blue-shirts/red-shirts/people-with-signs, the more attention those citizens receive. The more their names show up in right-wing social media. The more they’re made templates for how to demand rights and ensure “liberty” and “freedom” in eduction.

School board meetings are packed. Prayer circles are planned prior to these meetings. Books are burned. Parents are serving school board members with lawsuits and challenging their surety bonds.

Book removal tactics being employed now are not different than they’ve been in the past. Though our collective memory erases historical book censorship times, including in the 90s, when the American Library Association acted like a leader and outlined groups like Focus on the Family initiating these book challenges, in the early 00s around LGBTQ YA books, and in the late 00s/early 10s as more graphic novels were challenged, what’s happening now is not new. It’s just on a much grander scale, thanks to social media creating spaces for groups to share and disseminate information on how to do this. Facebook groups offer how-tos, groups like Moms For Liberty run trainings, and other right-wing organizations have created tremendous tools for parents to run for school and library boards.

Hero syndrome is much more evident in a hyper-connected world. It gives people a feeling of purpose, and the more they can “empower” others to stand up, the more they are rewarded.

The Millbury Public Library, a small library in Millbury, Massachusetts, recently saw this play out. The road to four books being stolen is itself circuitous, but it was unquestionably fueled by the rush grown adults felt at the attention they garnered.

Early in the school year, parents began showing up to Millbury school board meetings to complain about curriculum, what they called a “mini movement” to take back their rights on what was being taught. Dissatisfied with the school board’s response, several are now running for the board in the upcoming election in order to push their personal agenda.

In December, the Millbury Public Library Director Ann Dallair found four books that were checked out by a patron in October had yet to be returned. After the overdue notice went out, Dallair heard no response from the patron, who was given the option to pay for the books or return them. It wasn’t until January she heard back from the patron, who stated they felt the books were inappropriate to be in the children’s section and they would not be returning the books.

The books were in the young adult section.

Dallair continued to reach out to the patron, letting them know how materials are selected and that if they were still unhappy, they could file a formal complaint. In either case, the books needed to be returned. The patron never responded. The books were all queer titles, including Camp by LC Rosen, Lawn Boy by Jonathan Evison, Gender Queer by Maia Kobabe, and Jay’s Gay Agenda by Jason June.

Jeff Raymond, a Millbury resident, current Friends of the Millbury Public Library President and former Trustee on the Board, learned of the missing books at a board meeting in February. Though he Tweeted about it, there was little traction. That is, until a now-deleted Facebook post emerged from a Millbury School Committee member about the four books. Tempers flared about the books’ appropriateness, and added gasoline to an already-burning fire.

The parents creating chaos at the school board meeting and in the comments of that post were among those who stole those books from the library.

Quiet/soft censorship isn’t just about what is or is not done with intention by gatekeepers like librarians and educators. One of the reasons why it’s quiet is that people don’t know — and if people don’t know, they can’t speak up. In the case of Millbury Public Library, quiet censorship happened because of parents seeking hero status. If they choose to borrow and not return the books, they’ve done their part to champion parental rights. They then empower others to do the same thing: just borrow the books and don’t return them. Create an administrative headache big enough, and the fines for replacing those books will take a long time to realize.

Why the fear of young adults reading about queer teenagers is concerning and not the practice and modeling of theft (of public property, no less) is confounding. This same heroism of “borrowing” books with no intent to return is tried and true, but with the ability to be leaders of “mini movement,” these parents are rewarded with a hit of serotonin for their efforts from others on social media and in the media.

It doesn’t stop at theft though.

Troutman Middle School, in Troutman, North Carolina, is another school seeing tremendous parent/citizen engagement school board meetings. In the most recent meeting, several parents showed up in support of LGBTQ+ books and books by and about people of color. But the most disturbing part of the story isn’t the complaints about books. It’s adult who tried to break into the school to take photos of the school library.

“Last month, you heard from someone claiming pornographic books were in our media center, and that she denied being able to come into the school and prove that those books were there. That statement is partially true. The two books aren’t owned by TMS, and aren’t in our media center. The truth in that statement was she was denied to come into the school, and I will continue to do that,” said Principal Bryan Paslay, following the board’s public comment period in March. “We will deny entry into our school to random people calling in to say ‘I want to go take pictures in your library.’ They say they are doing this for the rights of all parents. Well, the parents of Troutman Middle School would be here causing a much bigger ruckus and scene if I just let any and everybody into that school.”

That adult, Paula Mimnaugh, is a former teacher in the county but has no children in the district. She was aghast she was not allowed to just enter the school library and look for books.

The two books she was most concerned with were Almost Perfect by Brian Katcher and Another Day by David Levithan. Mimnaugh has been a staple at Iredell School Board meetings since last summer. She proudly wears a Moms For Liberty shirt, and she’s shown up at other school board meetings in her area. At one, she tied wearing masks to Marxism.

Paslay added that in addition to parents trying to break into the school, they’ve flooded the school with harassing phone calls. They saw something on social media about books in the library and would not take the school’s word that the books were not in the collection. The calls did not end until the school threatened to get the police involved.

It seems an adult trying to get into a school or choosing to waste a school’s time with phone calls is more of a disturbance than the books. More, it’s an invasion of student privacy to take photos inside a school, even if that wasn’t the “intent.”

Participation in groupthink isn’t something most people do intentionally. And yet, so quickly have people flocked to groups like Moms For Liberty, Turning Point USA, and local-level “parents rights” organizations. These people show up to school board meetings wearing their associations on their shirts, feeling a sense of connection among people in an era of disconnection, and faithfully following others to fight against the topic du jour (masks, vaccines, anti-CRT, anti-SEL, anti-comprehensive sex education, books they don’t like). They’re doing this with a sense of pride — a sense of heroism — at defending their rights against indoctrination.

But as much as they parrot the words liberty and freedom and rights, aside from the obvious use of their children as political tools in a cultural war — that very same cancel culture these groups rail against — one thing these heroes fail to do is be the heroes their kids need them to be.

Breaking into a school is a crime. Stealing is criminal. Brandishing a dildo, grandstanding at school board meetings, flooding administration with unfounded threats of fighting their surety bonds, parading people to those sitting in front of a room to deliver lawsuits, whether real or not, are not only immature acts, in some cases, they’re terrorism. The same people fixated on defining words in their arguments dodge that one. But it’s terrorism to intimidate people with physical or property violence to coerce them. These spectacles, despite the disclaimers put before them, are still done in front of children, in front of the same impressionable minds and eyes that are purportedly in need of protection.

Book banners are not standing for something they believe in. They’re falling for what they’ve been told. Parents have always had rights. But it took a pandemic, it took putting a minute into the lives of children, to convince them they did not. Now, they’re scrambling (with the help of money and right-wing connections) to become the heroes they could have been all along: people who were engaged with their children, their schools, and their communities, in proactive ways.

Hero syndrome is yet another tactic in the white supremacy playbook.

It’s far more important we demand student rights, including the right to attend a school without worry their teachers may be removed for talking about actual American history, without fear that the school administration may be attacked, and without anxiety about strangers who want to barge into their schools to take photos.