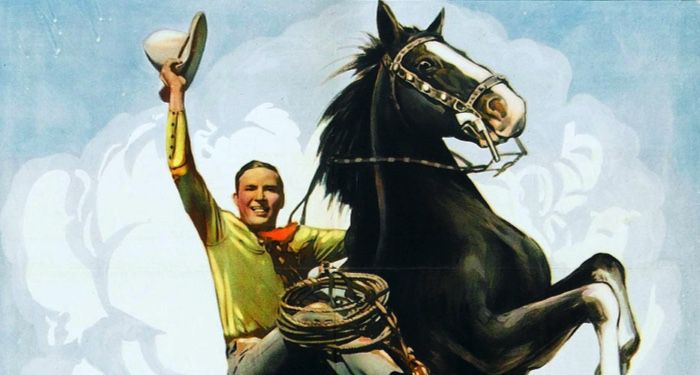 Insofar as Gene Autry is remembered today, it’s for introducing the world to the song “Rudolph the Red-Nosed Reindeer” in 1949. But at the time, Autry would have been a familiar name, especially to country music fans. Take a look through Wikipedia’s “[year] in Country Music” pages sometime: guy makes the top hits of the year list and/or the other major hits list almost every year from 1933 to 1951.

He wasn’t just a singer, either. Autry’s IMDb page has 98 credits to his name, which includes both his movies (made from 1934 to 1953) and his self-titled TV show, which aired from 1950 to 1955. And let’s not forget that, as the Singing Cowboy, he was also busily appearing on radio, not to mention writing and recording all those hit songs. The man was inescapable for decades. And so was his horse.

Champion, often billed as the “world’s wonder horse,” was very, very popular. Like, “got his own radio and TV shows” popular. In some of the movies, he even gets equal billing with Autry. I think his popularity was rooted in the public appearances he and Autry did, during which Champion would do all kinds of tricks — he sure didn’t do anything star-worthy in the (admittedly few) movies that I saw.

Given the pair’s sustained and substantial popularity, it was inevitable that they would end up starring in comic books. And so here we are.

Let’s All Go to the Movies

First, to see what I was getting into, I watched a few Gene Autry movies. (There’s a bunch available free from Shout Factory, if you’re interested and in North America.) They…were movies.

Look, I tried, but each of the four movies I watched was 60–80 minutes of tedium. The plots are generic, the comedic sidekicks are insufferable, and Autry’s relationships with women are so painfully chaste I can’t even tell if they’re supposed to be romances. (He’s lucky if he gets to hold hands.) Worse, Autry himself has no personality whatsoever. You could replace him with his own cardboard cutout with a radio taped to the back and not notice a difference. I could not muster a single solitary emotion for this man, not even when he spanks a woman in public in Twilight on the Rio Grande.

I’m sure this is partly a matter of individual taste, and probably generational differences as well. (Their depiction of Mexicans and Indigenous people is interesting.) But I do like old movies, and these did nothing for me. So naturally, I forged ahead and read the comics anyway.

Gene Autry Is Not a Time Lord

Dell Comics, those champions of licensed comics, published Gene Autry from 1946 to 1955 — quite the healthy run there. The covers all feature Autry posing with a horse, a gun, a guitar, or some combination thereof. The man had a brand and he stuck with it.

The plots are indistinguishable from those of the movies: Autry encounters bank robbers, bushwhackers, or some other type of charlatan. With a little trickery and support from local law enforcement, he puts a stop to the villains’ shenanigans. The only difference is that he isn’t made to sing under flimsy pretexts like in the movies, which makes sense.

Neither the movies nor the comics were too fussed about continuity. Some are set in the old west, and some are contemporary stories. Autry always plays himself, in a sense: his “character” is always named Gene Autry, and he basically acts the same in every movie and comic. Autry himself was the draw, with things like plot and setting just so much window dressing.

Most comics don’t even bother establishing a setting, leaving readers to wait for a guy with weird facial hair or a woman — literally any woman — to show up so they could identify the era based on fashion choices. Going by this kid’s outfit (and her mother’s, shown later), I’d guess Gene Autry #16 was set in 1948, whereas the previous panels, from Gene Autry #1, are from an old west comic.

Autry always dresses the same way, though. And the stories are all set out in the wilderness somewhere, so even modern stories lack modern technology, like telephones and cars. It creates a weird sense of continuity, despite the differing time periods.

Honestly, if Gene Autry was a cowboy time lord or something, I’d be a lot more interested.

But what really caught my attention — and what made me want to write this article — was the fact that Dell also published Gene Autry’s Champion from 1951 to 1955.

Lassie But With a Horse

Autry does not appear in Gene Autry’s Champion, except for a little photo in the corner of the covers. Instead, Champ pals around with a boy named Ricky and Ricky’s Uncle Smoky, who runs the Flying A Ranch. (Flying A was the name of several of Autry’s real-life business ventures.) Ricky doesn’t own Champ, who seems to come and go as he pleases. So in that sense, he’s less Lassie and more Skippy the Bush Kangaroo.

The plots are very similar to other Autry-related material. Champ will notice some danger — a poacher, a horse thief, a bank robber… — and go to alert Ricky. The human characters then carry the majority of the plot with Champ tagging along until the climax, when he is inevitably needed to capture the lead villain.

Champ displays an intelligence and independence in this comic that is absent in media where he is not the star. Obviously, this is another effect of the franchise’s lack of continuity, but if Champion is this capable, one wonders why he doesn’t contribute more when Autry is around.

Apparently, there was another comic, Gene Autry and Champion, but by this point I’d have enough. I can’t imagine it was any different from what we’ve already seen. Though now that I’ve said that, I’ll probably find out it was super exciting and full of explosions and thoughtful social commentary.

So what’s my final verdict on all this? If you’re really into westerns…well, I’d probably recommend Bonanza or The Man Who Shot Liberty Valance — something where the characters have more charisma than a sheet of drywall. But if you’re really, really into westerns, then Gene Autry and other assorted properties will feel comforting and familiar. And isn’t that just the perfect thing for the holidays?