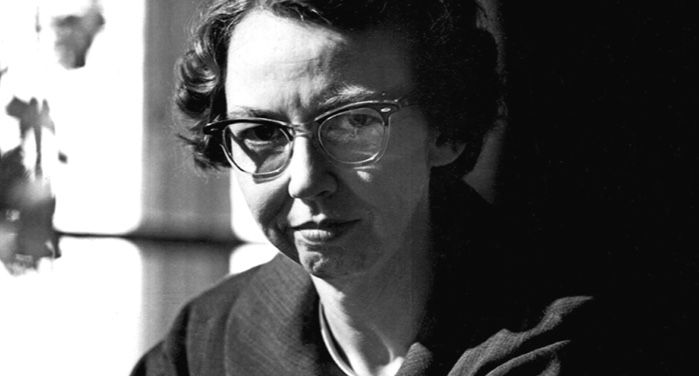 I’m a white, disabled woman who walks with crutches. I’m also a published short story writer from a Catholic family who attended Catholic schools. I have cerebral palsy, not lupus, and I’m from Massachusetts, not Georgia. Although our backgrounds differ, I related deeply to Flannery O’Connor’s work in college. O’Connor died in 1964, decades before the word ableism was coined in the late 1980s. Still, her stories convey the experience of ableism so vividly, I found them triggering.

I had a panic attack in the 2007 Gothic lit class where we read O’Connor’s short story “Good Country People” and Sigmund Freud’s essay “The Uncanny.” Manley Pointer, the story’s duplicitous villain, is a sexual predator, in an explicitly ableist and fetishizing way. Hulga, the story’s protagonist, is a woman with a wooden leg, and Pointer is even more interested in Hulga’s leg than in the rest of her body. He fetishizes her disability in particular by stealing her leg. He proudly tells her he’s stolen other prostheses from disabled people, including a glass eye. As a college freshman who’d already experienced a lot of explicitly sexual and ableist harassment, I felt a shock of recognition.

I didn’t even know the word ableism yet. It was amorphous in my life, as it is in O’Connor’s work. When I found disabled characters in literature, non-disabled characters viewed them as uncanny, grotesque, monstrous, or symbolic. Hulga notices a nosy neighbor’s unsettling interest in hearing how Hulga became disabled: “Something about her seemed to fascinate Mrs. Freeman and then one day Hulga realized that it was the artificial leg.” I also related to deflecting invasive questions about my disability.

I related so intensely to Flannery O’Connor’s Collected Stories, I almost wished I had written some of them. I didn’t really understand how different her segregated, inaccessible world was from mine. When I tried to imitate her, I knew I was out of my depth. In 2009, my creative writing professor, Jared Green, told me “it can be hard to get out from under” major literary influences like O’Connor. He was right. O’Connor’s style would be dangerous for me to imitate uncritically, although I didn’t yet understand why.

The episode of American Masters on Flannery O’Connor, which premiered on March 23 on PBS, was 10 years in the making. The documentary is fascinating and helped me contextualize O’Connor’s work and why her life was so different from mine.

Flannery O’Connor wrote from her own experiences as a white, Catholic woman with lupus in the U.S. South, then broadened her perspective to other marginalized people. However, because she predated the field of disability studies, experiences of ableism are not depicted as systemic oppression. In her stories, marginalized characters often function as learning opportunities for bigoted, white, cisgender, non-disabled characters. Or, to use Catholic terms, they are agents of transformation or grace for the bigoted characters. This style of storytelling is largely considered outdated now. For O’Connor’s Christian, white readers in the ‘60s, this approach was revolutionary.

In some books of the Christian Bible, all social hierarchies are abolished. However, in the Gospels, “the last shall be first” suggests that hierarchies may still exist after death, but in reverse. This reversal is apparent in O’Connor’s story “Revelation,” in which a bigoted white character has a redemptive vision of people of all races entering heaven. However, as Paul Elie pointed out in 2020, they are all still racially segregated. The title of another O’Connor story, “The Lame Shall Enter First” is another reference to this belief: people oppressed on Earth will be blessed after death.

The protagonist of O’Connor’s Wise Blood, a nihilist preacher named Hazel Motes, intentionally blinds himself at the end of the novel. In the PBS documentary, a family friend says O’Connor was inspired by Sophocles’s play Oedipus Rex. I consider Wise Blood’s ending an example of narrative prosthesis, or using disability as a plot device, metaphor, or moral. The term was coined by David T. Mitchell and Sharon L. Snyder in their book Narrative Prosthesis. Their book was first published in 2000, but it identifies literary examples of narrative prosthesis going back to Oedipus and Shakespeare’s Richard III.

O’Connor’s work shows empathy with characters with various disabilities. However, as Wise Blood demonstrates, it also draws on Christian imagery, which uses blindness as a symbol of ignorance and sin. Nowadays, this is called lateral ableism, or ableism from one disabled person towards other types of disabilities. As a disabled writer, I think it’s important to identify ableist tropes, even in works that are decades or centuries old, so we don’t replicate them.

I don’t say any of this to judge O’Connor’s disabled characters by today’s critical standards. I’m trying to do the opposite: to explain how deeply ableism is ingrained and taken for granted in our culture. Naming ableism is not an abstract, academic exercise. It helps us articulate intimate, distressing experiences. Without these frameworks, we might consider ableism isolated cruelty towards ourselves and our friends. To a theologically minded writer like O’Connor, bigotry is also a sin. O’Connor’s stories challenge the status quo of bigotry as natural or inevitable.

Because she died before the terms disability studies and ableism existed, we can notice ableism in Flannery O’Connor’s works without expecting her to have known better. In contrast, O’Connor using racist slurs — even in the titles of her stories and in private letters — was racist in the 1960s as it is today.

When I Think “Fearless,” I Think of Flannery O’Connor