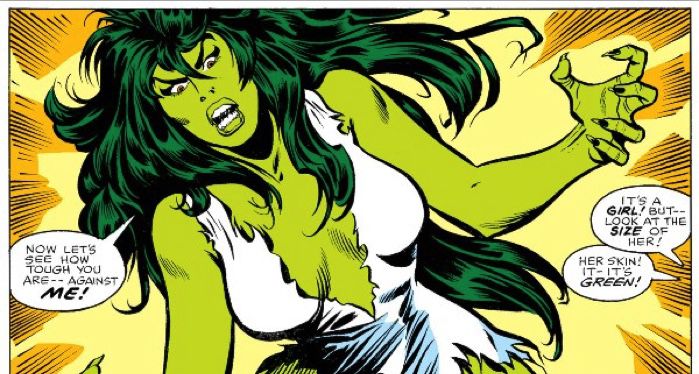 Superheroes have been around a long time, and most of the characters and genre conventions are pretty well established. But did every character always look and act the way we expect them to today? In this series, I’ll be looking at the first appearances of iconic superheroes to see what’s familiar, what’s fallen by the wayside, and what’s goofy as heck. Today: She-Hulk!

Fan favorite Marvel heroine She-Hulk, AKA Jennifer Walters, is set to make her live action debut this August in the Disney+ series She-Hulk: Attorney at Law, where she’ll be played by Tatiana Maslany. It’s a bit funny that it’s taken her 44 years to appear in live action, since the comics character was actually originally created because of television. Back in 1980, Marvel was concerned that the success of The Bionic Woman, a spinoff of The Six Million Dollar Man, might inspire the writers of then-running Incredible Hulk TV show to introduce a female version of their hero. If they did, Marvel Comics wouldn’t own the rights to her. So they hastily put out The Savage She-Hulk #1 (February 1980) by Stan Lee and John Buscema in order to stake that claim.

The Incredible Hulk never did introduce a female Hulk, but Jen went on to become one of Marvel’s most popular and iconic superheroines, so it worked out, anyway. But what did that first trademark-grabbing issue look like?

I don’t know about you, but I would absolutely pick this comic up.

We begin with a hunted, tormented Bruce Banner, unable to go on bearing the weight of his Hulkish secret alone. Looking for a confessor and an ally, he decides to see his “kid cousin,” Jennifer Walters, who is now an L.A.-based lawyer.

The vibes here are…slightly weird, but we’ll just leave that be. We’re also supposed to believe that Jen and Bruce are as close as brother and sister, even though they haven’t seen each other in what appears to be close to a decade and of course dear cousin Jen hasn’t been mentioned in the 18 previous years of Hulk comics. And that “Doc” nickname has got to go. But hey, the little scarf is cute!

Bruce recaps the Hulk’s origin for Jen, who is dismayed on her cousin’s behalf but determined to help. Bruce warns her that this could put her in danger, but she scoffs: “The lady’s a criminal lawyer! I live with danger!”

More than she knows, because as she drives Bruce to her house, they are tailed by men working for crime boss Nick Trask. Jen is currently defending a henchman named Monkton, who’s been framed for killing Trask’s bodyguard, but Jen has decided to…start a rumor that Trask killed the bodyguard himself, which seems both wildly reckless and potentially very illegal itself.

Bruce scares the armed gunmen away by turning the hose on them (sure), then carries Jen to a house across the street with a doctor’s shingle hanging on it. No one’s home, but he knows they have the same blood type, and an earlier page helpfully informed us that he did a few semesters of medical school, so he’s perfectly capable of giving her a transfusion of his own blood:

When Jen wakes, Bruce calls the police, sees Jen off to the hospital, and then Hulks out from the stress and flees, his cameo appearance complete.

Meanwhile, Trask’s men show up in Jen’s hospital room to finish the job:

And Jen loses her temper:

You will note that despite being enormous and green and wild, Jen’s hotness has been carefully maintained, unlike Bruce, who looks truly monstrous when he hulks out. Hmm, I wonder why the difference? It’s a mystery!

Jen chases them out of the hospital and terrorizes a confession out of them that also handily clears her client and implicates Trask:

The other obvious difference between Jen and Bruce is that even though Jen’s temper is running away with her a bit here, she doesn’t lose control like he does: she’s perfectly capable of understanding a confession, handing the criminals unharmed over to the cops, and, you know, continuing to use correct grammar and stuff. It’s because of this that I’ve seen the She-Hulk power fantasy likened, not to the Hulk, but to Spider-Man: someone mousy and overlooked who gets a dose of radiation and suddenly their confident, playful, desirable side emerges. Of course, Jen’s not having a whole lot of fun yet. But just wait! (Uh, wait until after this issue. Actually, wait until after this whole series.)

As Jen transforms back, she sneaks back into the hospital with no one the wiser. But thanks to Bruce’s earlier confession, she knows exactly what’s happened to her:

This is a pretty straightforward Hulk story, with solid writing and art, though Lee and Buscema would depart after this issue in favor of the team of David Anthony Kraft and Mike Vosburg, who did the remaining 24 issues. As essentially a placeholder to secure a copyright, it’s not bad. It’s also not particularly groundbreaking, and as I hinted above, it doesn’t really indicate what a fun, beloved character She-Hulk would go on to be. That would come later, with her tenures on the Avengers and the Fantastic Four, and especially with John Byrne’s work on her second series, 1989’s The Sensational She-Hulk, which jettisoned the traditional Marvel “woe is me” outlook for gleefully cheesecake-y fourth wall-breaking comedy, well before Deadpool got into the game, I might add.

The new Disney+ series does look to be aiming for comedy, though how self-aware it will be remains to be seen. Though the early glimpses of the she-CGI look…concerning, Tatiana Maslany is a powerhouse of an actress, so hopefully she gets the chance to give Jen the performance she deserves! It’s been a long time coming.