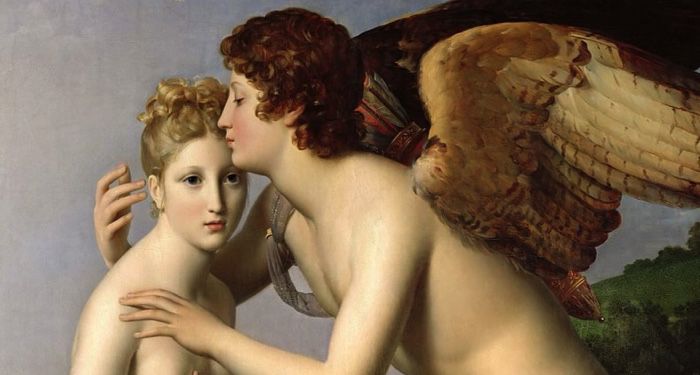 Of all the Greek mythology tales, of which there are many, the story of Eros and Psyche is my favorite (yes, even over Eurydice and Orpheus, which puts my heart in my throat every time I reread it). So let’s talk Eros and Psyche retellings.

For those in need of a refresher, Eros (or Cupid, as the Romans named him) is the son of Aphrodite. Psyche is a young woman so beautiful that her community believes her to be Aphrodite personified and, to her horror, begin to worship her instead. This, uh, pisses off Aphrodite a whole lot, so much so that she orders her son to make Psyche fall in love with the most hideous creature on earth as punishment. Her father discovers that the only way to appease the gods is to tie his daughter up to a rock and let said creature carry her off. Except there is no creature: there is only Eros, ready to do his mother’s bidding until he sees Psyche and falls deeply in love with her.

He has her taken to his palace, where Psyche spends her days alone, and spends her nights in the dark with Eros, who’s forbidden her to look at him in the light. This holds true until Psyche’s sisters come to visit. Jealous as they are of her good fortune, they convince Psyche that she’s indeed married a hideous monster, and she needs to see his face to be sure.

And so curiosity wins her over: she stands over her sleeping husband with an oil lamp, expecting a monster, and finds a gorgeous man. She accidentally drips hot oil on him, and when Eros wakes to find that she’s ignored his request, he leaves her. Devastated, Psyche turns to Aphrodite for help, who will only give it if Psyche performs three impossible tasks, the third of which causes Psyche to fall into a deep, endless sleep. Eros finally steps in to save Psyche, and they get their happy ending. I am paraphrasing a whole lot, and for a deeper look at the story, please read Madeline Miller’s summary, and pray that she eventually does her own retelling of this deeply romantic myth.

Let’s take a look at some modern retellings of Eros and Psyche’s love story. There is a little something for everyone on this list, from classic retellings to introspective adaptations to steamy romance. 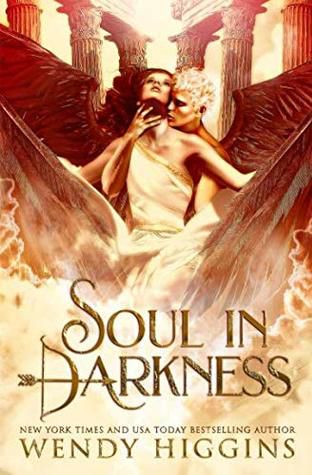 Soul in Darkness by Wendy Higgins

Wendy Higgins’s retelling retains the ancient Greece setting and sticks to its origins, using their Roman names: Princess Psyche is so adored by the public that visitors begin leaving her the same gifts and offerings that Venus gets. This version, however, gives us more insight into Cupid’s personality and motivations, and provides a closer look at how Psyche could fall in love with a husband she only meets in the dark, and one she’s been told is a monster. 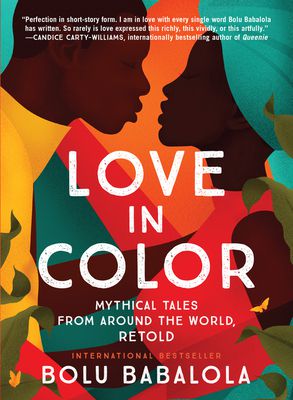 Love in Color by Bolu Babalola

Bolu Babalola’s collection is filled to bursting with love stories reimagined from classic myths around the world. These stories center women and draw from lore in West Africa, the Middle East, ancient Greece, and more. One of these love stories is that of Eros and Cupid, so you will be treated to a lushly written retelling of their timeless tale in this collection. 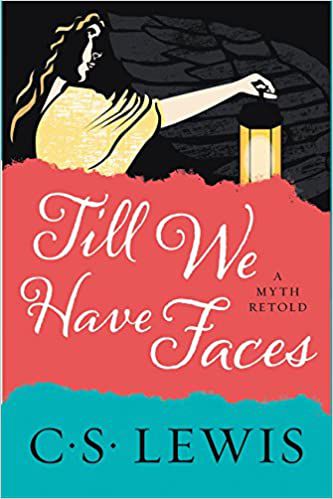 Till We Have Faces by C.S. Lewis

The retelling by C.S. Lewis is from a wholly different perspective: that of Psyche’s sister, Orual. Lewis gives you a glimpse of the world and the upbringing of Psyche and her sisters, through the lens of the eldest sister that is least loved by their father. Orual’s possessive love of Psyche offers some explanation for the events that unfold after Eros falls in love with Psyche. There is great introspection in this retelling, and a chance to see this classic Greek tale in a completely different light. 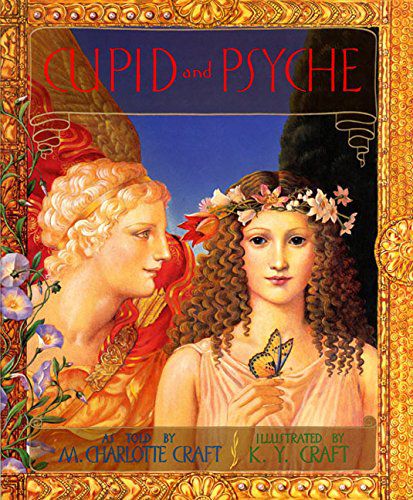 M. Charlotte Craft’s retelling is more faithful to the original myth, with the same setting and events as they unfolded for Cupid and Psyche. The difference here is that it’s a gorgeously illustrated version, lovingly depicted by famed illustrator Kinuko Y. Craft (M. Charlotte Craft’s mother). Forty paintings accompany the beautifully told tale. 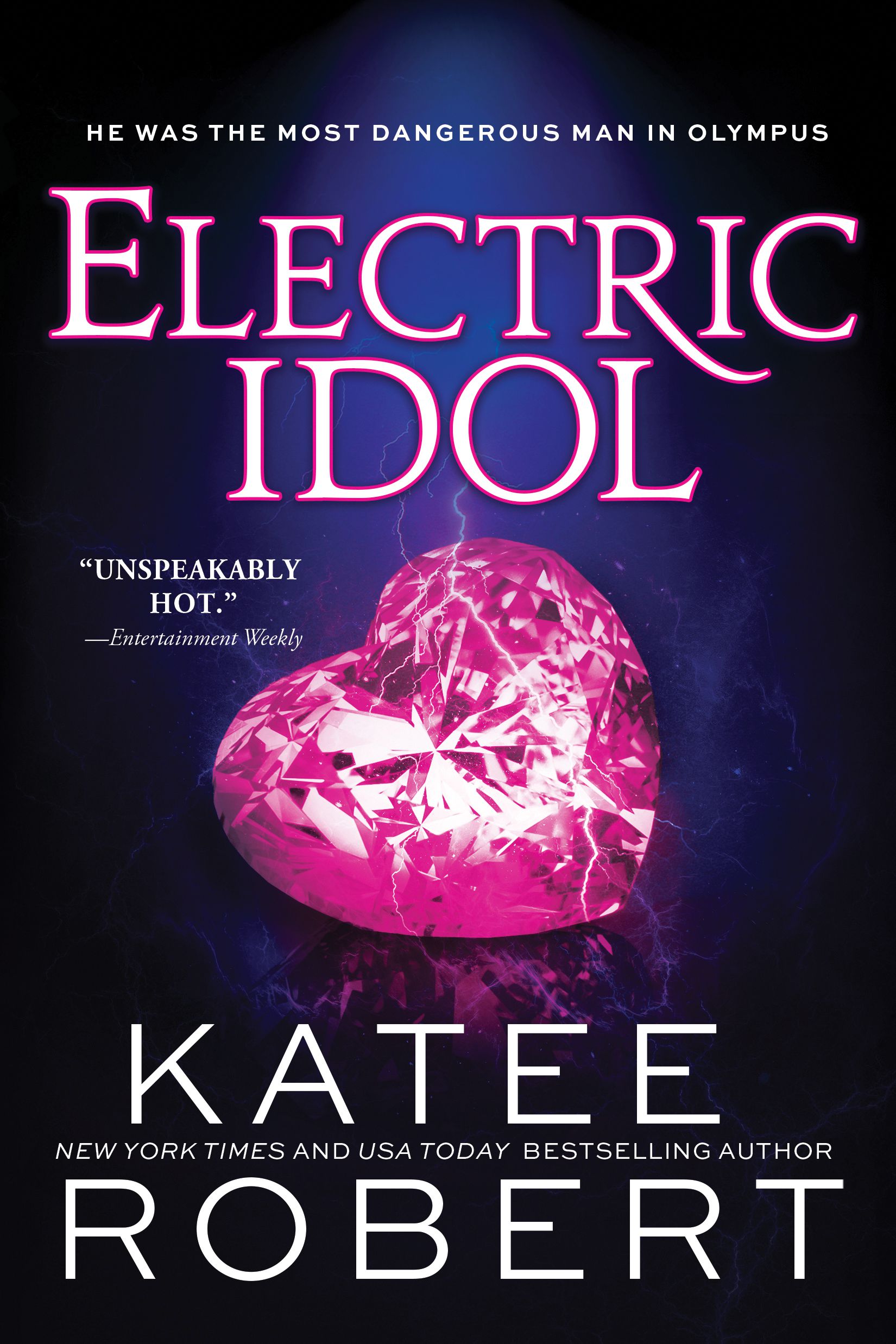 Katee Robert takes Eros and Psyche to the future with this modern retelling. In the sleek city of Olympus, Psyche has incurred the wrath of Aphrodite, who sends her son (and trained killer) Eros to end Psyche’s life. Eros has been the monster in the shadows for his mother for so long that he almost believes that’s all he is…until he tries to carry out this mission for her. Because once he sees Psyche and experiences her kindness, he can’t do it. The only way to save her from his mother’s rage is to protect her himself by marrying her. 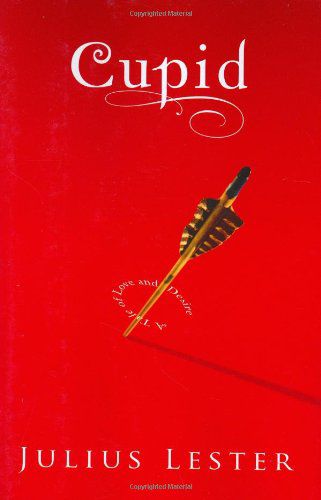 Cupid: A Tale of Love and Desire by Julius Lester

Julius Lester artfully weaves humor into his Cupid-focused version of their love story. Cupid has spent all his time dispensing love and heartache to others, only to find himself at the other end of the arrow (and on the wrong side of his mother’s anger) when he falls in love with Psyche. This is a delightful, lighthearted, and romantic retelling that injects levity into a story that can oftentimes be interpreted quite heavily. 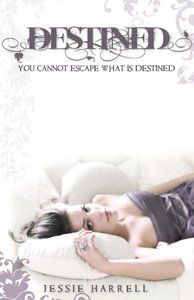 Jessie Harrell’s retelling refreshes the role that Aphrodite plays in Psyche’s life: that of the spurned surrogate mother instead of the jealous goddess. Aphrodite is so pleased that mortals are worshipping Psyche’s beauty that she wishes for Psyche to marry her son, Eros. Except Psyche refuses to marry a stranger. The denial sends Aphrodite into a rage, and she demands retribution that Eros can’t bring himself to carry out for her. He brings Psyche to his home in secret to protect her, and a romance between blossoms from there. 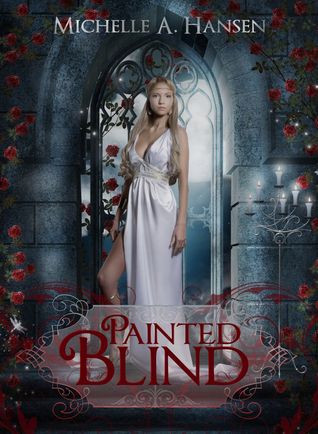 Painted Blind by Michelle A. Hansen

The ancient Greek setting meets the modern world with Michelle A. Hansen’s retelling. Psyche is a model from a sleepy town in Montana, and her modeling photos reenacting Botticelli’s The Birth of Venus make their way to her hometown…and capture the real Venus’s attention. Furious that a mortal girl is making a mockery of her image, she sends her son for revenge; except he has no interest in harming Psyche. He rescues her instead, and their classic love story plays out from there.

There are many fresh angles on the story of Eros and Psyche to help you appreciate the facets of their tale. For more retellings of classic Greek stories, check these out: