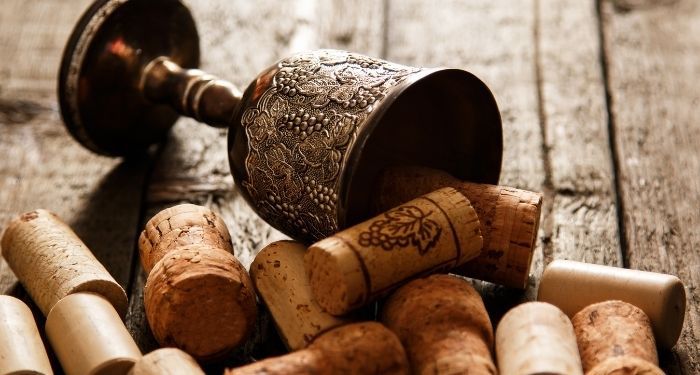 Honestly, I am not a big real-life drinker, but I am a big fan of fantasy food. If someone is giving me a feast of the mind in medieval fantasy, it will include drinking, and I want to know the in-world mechanics and out-of-wold historical inspiration. Essentially, the drink in medieval fantasy goblet, chalice, or tankard is just as important as the food on their plate.

I come to this approach by connecting the following strings, so please picture a mental cork board complete with printouts, thumbtacks, and red yarn. In my mind, it’s a bit of a three-step process. First, the production of medieval alcohol was abundant and it was safe to drink. Second, the importance of drinking crossed social classes and situations seen in medieval literature. Third, fantasy worlds are based on both history and literature so they then contain relatable alcohol-based plot lines.

A History of The Drink in Medieval Fantasy Books

Historically, the production of medieval alcohol was abundant with multiple roads to drunkenness. Let’s just start with the wine. In the year 1000, Europe was likely hotter than normal. Seriously, according to F. Mencarelli and Pietro Tonutti in Sweet, Reinforced, and Fortified Wines: Grape Biochemistry, Technology and Vinification, people were able to grow wine in much higher latitudes like Scotland due to the warm climate. So, more people had access to wineries than ever before and these drinks were strong. A regular glass of wine today is between 12% and 15% ABV. A medieval fortified wine was closer to 18% to 20% ABV and lasted for only seven years. But people often added spices and flavors to their wine and medieval patrons drank most water with wine to avoid water-borne illness. So, the trope of complaining about watered-down wine may have some historical viability, but plenty of patrons would do it themselves.

Moving onto beer and ale, the traditionally female drink. Although brewing ale or beer was not exclusive to women, beer was mostly produced by women, who kept the drink available for their families and were known to sell it for profit as well. These homebrews could be low-alcohol drinks that also provided nutrition for the whole family. After all, children needed something safe to drink and some extra calories in the winter as well.

That being all established, the people of medieval England were defiantly drinking in and out of the home. Breweries did pop up in monasteries with the introduction of hops to English and French beer around 1250. Monks had always produced wine, so this expansion was not too much of a stretch. The process mostly went like this: monks produced the wine and beer for taverns and inns to distribute. In London alone there were reportedly 354 taverns and 1,334 breweries by the 1300s. You could kick a rock and it would either hit a place or person who had contact with alcohol. Wine, ale, beer, and other alcoholic drinks played an important role in creating community, maintaining health, and fueling the economy to boot.

Drinking Habits in Medieval Books by the Glass

Now we’ve hit the medieval literature written in a long period where drinking crossed social classes and situations. A great example of alcohol’s ubiquity is in Sir John Mandeville’s The Book of Marvels and Travels, written in the mid to late 1300s, a time right after the little ice age. The wild thing is this book loves to talk about a time before the climate crisis when wine was abundant. Back when wine could be made in Scotland. So, when he visits places across the globe on his travels, whether or not they have wine is always important. The best civilizations have easy access to wine. Unsurprisingly, characters in medieval fantasy often curse a lack of wine or the fantasy drink equivalent. Access to alcohol becomes a connecting point between cultures and eases the strain of travel.

As an aside, the book is an account of one man’s travels from Europe to Asia from someone scholars believe never left England. Parts are incredibly strange, magical, and racist, but it has something to say about European medieval drinking culture, something even a man who never left his town would know plenty about.

For a more courtly approach to drinking culture, we have to look to the famous medievalist J.R.R. Tolkien’s favorite, Beowulf originally transcribed in 1000. Beowulf follows a young hero who defeats a monster for a far-off kingdom, then defeats that monster’s mother who wanted revenge, all before becoming king. Ultimately, (after the unknown contents of the burnt middle part of the book) he dies killing a dragon.

The important bit for our discussion here is the noblewomen pouring drinks. In the mead hall, she shows the importance of the people at the table by pouring their drinks. Women provide wisdom and drink to soothe the soul in a way we continue to see in modern fantasy. So, the next time you see a queen pouring glasses of mead in a fantasy castle as a sign of respect or in a gesture of peacemaking, you can look to Beowulf and other like-minded Old English epics.

The Drink in Medieval Fantasy: What we Continue to Pour

Finally, we have ended up at a place where European-inspired fantasy contains a fair bit of medieval drinking culture. From the endless wine in the royal castle to the uniform availability of ale in even the poorest in medieval fantasy books like A Curse So Dark and Lonely by Brigid Kemmerer or The Bridge Kingdom by Danielle L. Jensen, drinking has become a part of necessary worldbuilding and lore.

Who is running the tavern and how good their drinks are is an aspect of local culture in medieval fantasy. Some are even the sites of political uprisings like in Of Silver and Shadow by Jennifer Gruenke. And we cannot forget all the epic tradition of poisoning scenes involving a hidden substance in wine at a noble table. Something that is easily hidden in a drink everyone added spices to anyways. Just last year, King of Battle and Blood by Scarlett St. Clair was one new addition to a wonderful trope. For every major medieval fantasy series, a drinking scene comes to mind, expanding the ubiquity of the medieval tradition.

Medieval-inspired fantasy drinking will not be going anywhere, but we should continue to ask why we drink in medieval fantasy. What roles do these drinks continue to serve in our plot lines? How can we imagine new brewing and drinking tropes within a medieval fantasy book? And most importantly, how will this continue to change as our view of medieval drink history evolves over time?