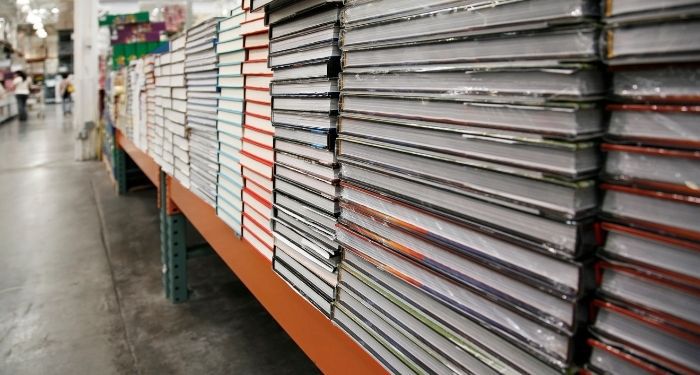 In a recent YouTube video, author John Green relates a story of visiting a book sorting facility. He says that an employee of the facility excitedly pointed out a copy of Green’s book Paper Towns on the conveyor belt, and explained that an algorithm would decide if the book would be put back into the warehouse or fed to a “machine that looks like the garbage compactor from Star Wars.” He says he “watched [the book] get kicked onto the conveyor book and get chomped.” It sounds like an author’s nightmare. It sounds like the egg sorting scene from Charlie and the Chocolate Factory. But is it something that really happens?

This past June, a video circulated around Twitter and several major news outlets. The video, produced by the British news source ITV News, shows covertly filmed footage from inside an Amazon UK warehouse. It shows customer-returned and unsold electronics, tools, masks, jewelry, and recognizable bestselling books in bins headed off to be disposed of. The anonymous former Amazon employee who shot the footage explained that their facility had a target of destroying 130,000 items each week.

Sam Chetan-Welsh, a Glasgow Greenpeace representative interviewed by ITV, called it “an unimaginable amount of unnecessary waste, and just shocking to see a multi-billion pound company getting rid of stock in this way. Stuff that’s not even single use but not being used at all, straight off the production line and into the bin.”

When asked about their book-destroying practices via email, a rep for Amazon said, “At Amazon, we’re constantly working to minimize waste across our retail operations, for our business and for our customers. The vast majority of returned inventory, including books, is resold to other customers or liquidators, returned to suppliers, or donated to charitable organizations, depending on its condition. In certain cases, we are unable to re-sell, donate or recycle products, for example for safety or hygiene reasons — and we’re working hard to bring this number to zero.”

While the anonymous former Amazon employee said that the items were being sent off to a landfill, Amazon said that the landfill facility also had recycling capabilities, and implied that the items were being sent to be recycled, not dumped. Since the video was released, Amazon has made sure to publicize their various strategies to avoid waste. On August 3, 2021, Amazon published a blog post announcing “new programs” that “give returned and unsold inventory new life.” Amazon did not directly address the ITV videos in the blog post, but they did emphasize when the programs would be available in the UK.

Reading between the lines in their blog post, it seems that any time a consumer returns an item to a third-party seller — any item that has a note under the buy button that says anything other than “Ships from Amazon, Sold by Amazon” — that item will only be returned to the seller at the seller’s cost, or they could choose to have Amazon “donate” the item. Essentially, they could lose money on shipping or they could lose money and write off the item. Now, Amazon has these two new programs that will allow these items to be resold, which should be a win for everyone, especially as it seems very possible that the “donated” items were being sent to a landfill — ahem — recycling center. The Amazon spokesperson said: “Before we would have to dispose of inventory, but now we’re able to give it a second life and make money off it.”

And, of course, for Amazon, to make more money off an item is the happiest ending of them all.

But let’s return to John Green’s book-chomping machine. While Amazon seems to be happily destroying merchandise of all shapes, sizes, and levels of ecological impact, this article is primarily concerned with the books. Is book-chomping normal? Was that book-sorting employee just being sadistic? Well, happily the employee was just doing their job, but unhappily, book-chomping, or shredding or pulping, is quite normal and happens every day at publishing houses and related facilities around the world.

Amazon didn’t invent the idea of destroying excess inventory. In destroying the inventory themselves, they’re simply cutting out the middleman. (That they do this with electronics and other products more volatile and less likely to break down in a landfill is a problem, but not a problem that this article can address.) It’s been a part of the publishing world since early bookbinders reused pages from unsold books to bind new books. But in the modern publishing world, there are much less whimsical reasons that books might be destroyed.

Bookselling is almost always done on consignment. That means that when a bookstore, any bookstore, from your tiny independent all the way up to Amazon, buys a book from a publisher to sell in their store, they are allowed to return it to the publisher if it doesn’t sell through to a consumer. It’s a messy process that means publishers have to guess how many books will be returned and when. January and February can be difficult as all the overstock books from holiday shopping head back from bookstores to publishers. At the same time that publishers are getting new copies of their upcoming spring and summer releases from printers, they’re receiving cases and cases, and even pallets and pallets, of returned books. You can imagine the kind of storage issues this can bring to a busy warehouse, and the solution is often to shred or pulp any of those returns that are damaged or can’t be expected to sell quickly.

(Returns are always scary for authors, too. They may have learned that they sold 500 or 1000 books in October, only to find that those books didn’t sell at the register in the all-important third quarter, and now the author’s royalty statement won’t be what they expected. It can be a raw deal for everyone, and that’s just one reason many publishers are trying to move away from the consignment model. But many bookstores rely on the ability to return, and publishers want to keep their partners in bookselling happy, and so it goes. But I digress.)

According to an excellent New York Magazine article from 2012, “Dead Books Club,” the idea of pulping books, mechanically chewing books up until they turn into a sort of milky liquid that can be reformed into paper, came about during paper shortages during WWII. Paper fibers lend themselves to recycling fairly well, though for a high-quality, long-lasting paper, “virgin” paper fibers need to be mixed with the recycled fibers. In 2012, about 13% of book paper was made from recycled books.

It’s hard to think of a book being pulped. We think of books as somewhat sacred objects. An author put years of their life into writing it, then several editors took their time working through the manuscript. A designer came up with the cover and perfected the interior. Dozens of hands touched the book before it made it to the warehouse, and all sorts of resources were used to produce and transport the book. The idea of a book returning to its most basic materials can feel a bit like a tragedy. But while those unread paperbacks may seem to have a short lifespan, but really, they can be reborn again and again as brand new books. And that’s sort of a happy ending, and for more than just Amazon.