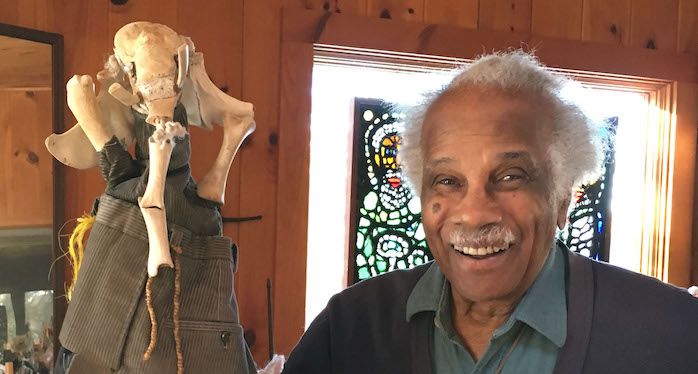 Celebrated children’s illustrator and author Ashley Bryan passed away on February 4th in the home of his niece, according to an update to the author’s website. He had just turned 98 this past July, and his family shared that he “continued to recite poetry from his vast repertoire – especially Shakespeare’s sonnets – up to the very end.”

Throughout his long career, Bryan received multiple honorary degrees, lifetime achievement recognitions, and awards for his illustrations accompanying the work of such writers and poets as Langston Hughes, Nikki Giovanni, and Walter Dean Myers as well as for his own written and illustrated works. He became well known for his retellings of African folk tales and African American stories, and received multiple ALA Awards, including Newbery Honors and multiple Coretta Scott King Awards. Libraries and library rooms from the Bronx to Kenya have been named in his honor.

In his final published book, Infinite Hope: A Black Artist’s Journey from World War II to Peace, Bryan told the story of what it was like to be drafted into the U.S. Army during World War II and how he faced racism and segregation as well as horrible treatment. It’s the story of the connections he made that sustained him, and the art he turned to when times were bleak.

In addition to leaving behind a vast body of work in the form of his books and illustrations, Bryan’s block prints are also available for purchase online. He also loved to create in found object mediums, and even crafted puppets. Many children’s authors took to Twitter to share photos and memories, and recall hearing him speak in person, opening his presentations with “My People” by Langston Hughes. “Ashley was passionate about making poetry come alive and educating young and old of every ethnic background about the legacy of African and African American culture,” his family wrote on his website. “Ashley, artist and storyteller, touched and inspired all who met him of any age. Rest in peace dear Ashley.”