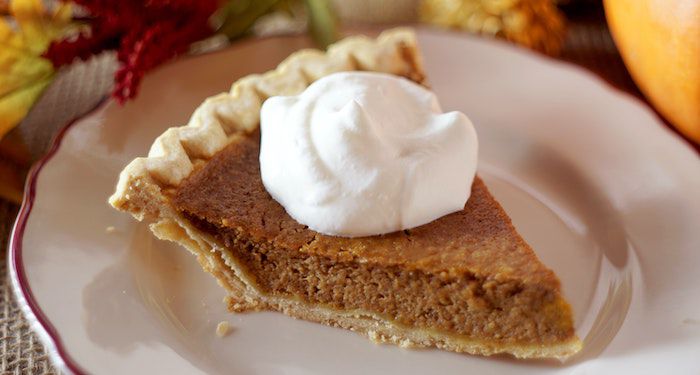 Welcome back to Cookbook Showdown, where we take four recipes for the same dish from popular cookbooks and test them to find out which recipe comes out on top. Today, I’ve made four of the best pumpkin pie recipes from cookbooks by Martha Stewart, Samin Nosrat, Lauren Ko, and Claire Saffitz. Which autumnal delight came out on top? Read on to find out!

Pumpkin pie is a beloved fall favorite, frequently found at Halloween parties and Thanksgiving feasts. Typically, pumpkin pie has a pastry shell filled with a custard made of pureed pumpkin, eggs, cream, sweetener like brown sugar or honey, and some combination of warming spices. These spices can include cinnamon, ginger, nutmeg, cloves, allspice, and more. If you think about it, pumpkin pie basically started the pumpkin spice blend that can now be found in everything from lattes and cookies to deodorant and cough drops.

Like much of American cuisine, pumpkin pie is the result of colonization. Pumpkins are native to North America and were some of the first foods Native Americans shared with white colonizers. Pumpkin pie was likely present at the first Thanksgiving in 1621, although it was probably prepared by baking spices and seasoned milk inside a whole pumpkin. Once pumpkins made the journey to Europe, and particularly to pie-loving France, they quickly found their way into the custard-based, pastry-crusted pumpkin pie modern Americans would recognize.

While the pumpkin pie we know today is similar to pumpkin pies made centuries ago, the process of making pumpkin pie changed significantly as canned pureed pumpkin became more available. And if you haven’t already heard, forgive me for rocking your world, but you deserve the truth: The canned pumpkin found at grocery stores today isn’t really made with the pumpkins you carve to make jack-o-lanterns. Instead, they’re most often made from squash. Libby’s, the brand that makes more than 85% of canned pumpkin worldwide, uses a proprietary “Dickinson squash” that is more closely related to butternut squash than the orange gourds found at your local pumpkin patch. And because of the murky line between pumpkin and squash, the FDA allows them to label cans as 100% pure pumpkin. But not to worry. This squash is actually better for your average baked good, as it’s less watery and stringy than orange pumpkins.

Now that you’ve had a primer on pumpkin pie, let’s get to the cookbook showdown, shall we? 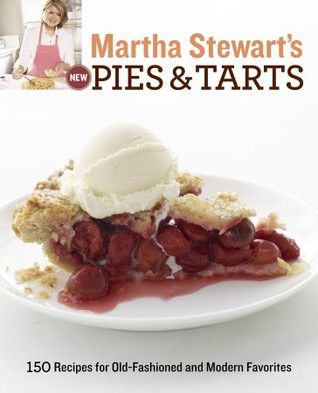 If you’re looking for any classic pie recipe, you’ll likely find it in Martha Stewart’s Pies & Tarts cookbook. It’s a massive collection designed for home bakers of any skill level. And when I started looking for the best pumpkin pie recipes, I knew Martha would have my back. In fact, she had more than that. In addition to standard pumpkin pie, this cookbook also has recipes for a mousse tart, flan, icebox pie, mini jack-o-lantern tarts, and chocolate spider web tarts made with pumpkin. Since I was looking for a pumpkin pie to impress on any Thanksgiving table, I stuck with her classic pumpkin pie recipe. Here’s how it turned out.

This was about as barebones as the pumpkin pie making process gets, plus a little decorative touch. Martha Stewart’s pate brisée is a very approachable pastry, with options to make it by hand or with a food processor. Her pumpkin pie calls for using the pastry scraps to create little leaves, which were way cuter before they were baked, but still turned out fairly recognizable. The filling was very standard, with cinnamon, ginger, and ground cloves added for flavor. The custard cracked while cooling, something that could have been avoided if I’d turned off the oven and cracked the door while it came to room temperature. The final result was a tasty pie that definitely meets expectations, but left plenty of room for improvement. 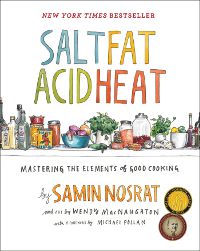 If you’ve been keeping up with past Cookbook Showdowns, you’ve likely heard about my deep, enduring love of Salt, Fat, Acid, Heat. This is my number one favorite and most recommended cookbook. It not only has tons of useful recipes; it actually teaches you how to create and improvise recipes by balancing flavors and components of the dish. In fact, Nosrat’s recipes (spoiler alert) reigned supreme in the apple pie and buttermilk biscuit showdowns. I was honestly a bit hesitant to include her pumpkin pie recipe. If she won for a third time, I worried readers might think I was biased. Let’s see what happened when I tried Samin Nosrat’s classic pumpkin pie recipe.

While this pie may look pretty in the picture, I’m sorry to tell you that it was incredibly disappointing to eat. It hurts to say it, but everything about this recipe was wrong. While it uses the same winning pie crust recipe as Nosrat’s apple pie, it wasn’t parbaked (baked partially before being baked with the pumpkin filling), which led to the dreaded soggy bottomed pie. The filling itself was under-seasoned, and even worse, a terrible texture. In my opinion, it needed twice as many eggs and half as much heavy whipping cream. With such a moist filling, I had to bake it more than half an hour past the recommended baking time in order to make the custard set. It tasted slightly better after sitting in the fridge overnight, but this is not a recipe I would make again. In fact, I was planning to test another recipe that didn’t call for parbaking the crust, but after this fiasco, I couldn’t stand to make the same mistake twice and found a different recipe instead. 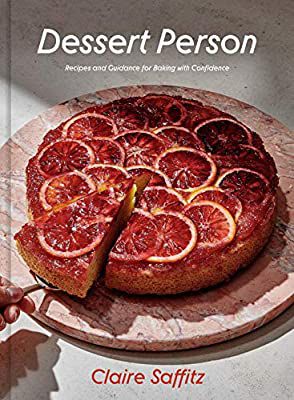 Dessert Person: Recipes and Guidance for Baking with Confidence by Claire Saffitz

This new cookbook by former Bon Appétit senior editor Claire Saffitz is a celebration of all things sweet. With recipes for cakes, pies, bars, breads, and so much more, Dessert Person has got the perfect unique treat for anyone. She does an especially good job of demystifying intimidating dishes like tarte Tatin, croissants, and croquembouche. Her pumpkin pie recipe comes with a twist: caramelized honey and browned butter. Take a look at how it went.

Saffitz’s pie crust recipe was a little intimidating, made up of three full pages of written instructions and three full pages of process photos. Was it the most difficult pie dough recipe I’ve ever made? Yes. Was it the tastiest pie crust I’ve ever made? Also yes! This is going to be my new go-to pie crust recipe. As for the filling, browning the butter and caramelizing the honey took a little extra time and skill, but they gave the pie a rich, nutty flavor that really worked, even if you couldn’t necessarily identify them as the secret ingredients. The look and taste was exactly what I look for in a pumpkin pie, making the extra steps well worth the trouble 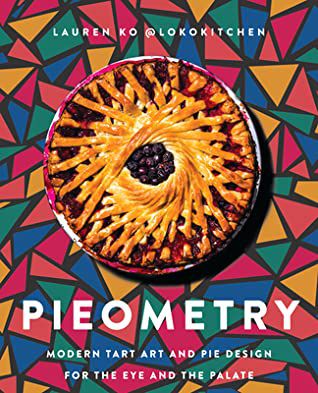 Pieometry: Modern Tart Art and Pie Design for the Eye and the Palate by Lauren Ko

The beautiful cover alone was enough to make me want this cookbook in my kitchen. But honestly, the complex designs of the pies in this cookbook by Instagram pie artist Lauren Ko (@lokokitchen) had me too intimidated to try my hand at them. Pretty much every pie in this cookbook requires an artistic eye, a steady hand, and a pair of kitchen tweezers. This Cookbook Showdown was the perfect chance to overcome my fears and try her spin on pumpkin pie, named “Once in a Tile” thanks to its tiled topping. It also has a bold spin on the classic pumpkin flavor: black sesame seeds in the crust and black tahini swirled into the filling. Here’s how it went.

I would describe the process of making this pie as harrowing. It started with finding the ingredients. I went to five different grocery stores in three states to eventually find black sesame seeds at one, and I couldn’t find black tahini anywhere. The internet told me it was quite easy to make tahini at home by pulverizing sesame seeds with neutral oil and a pinch of salt. But after working with a manual food chopper, a food processor, an immersion blender, and a pestle, I ended up with a paste that looked like wet asphalt. Then came the actual process of making the pie. Cutting and baking a hundred tiny pastry triangles was as exhausting as it sounds. But the pastry and filling came together easier than expected, and when I finally put it all together, I was pretty amazed at what I created. Even better, it tasted wonderful! The sesame seeds gave the pie a nice salty/sweet balance, and the plentiful spices made the pie filling pop. Was it worth the trouble of making it? I’m still not sure. But I sure did love eating it.

Before we get to the results, I want to share a few tips I learned along the way during this Cookbook Showdown.

Alright, without further ado, let’s get to what you’ve all been waiting for: the results! Because so many of these pies turned out great, I’ve got one winner and couple of honorable mentions. Let’s go to the slice-by-slice:

After much debate among my taste testers (AKA my wife and a few friends), Claire Saffitz’s pumpkin pie recipe was officially declared a winner. The pastry knocked it out of the park. The filling was deliciously spiced, and the addition of browned butter and caramelized honey gave the pie excellent depth of flavor. It was beloved by dedicated pumpkin pie fans and skeptics alike. This is a pie I would make again and again.

Honorable Mention — Most Impressive Pumpkin Pie: Lauren Ko, “Once in a Tile,” Pieometry

This pie was absolutely beautiful, and the flavor was even more impressive. It was thoroughly spiced, and the black sesame and black tahini gave it a great savory, nutty flavor. A pie-baking friend tasted it and said it was so good it made her angry — which I took as a compliment. Do I ever want to make it again? Absolutely not. It was a ton of work, and finding some of the ingredients was a big challenge. But I would definitely incorporate the flavors of black sesame and black tahini in a future pumpkin pie if I can find them at the store, and the tiled triangle pattern is something I could replicate if I was really trying to show off.

Martha Stewart has made a career of teaching home bakers how to make classics in their own kitchens. Her pumpkin pie recipe is totally solid, and it’s laid out simply and clearly. The taste may be a little boring, but that leaves plenty of room to make your own additions and alterations to create a new recipe to call your own.

Thanks for joining us for Cookbook Showdown: Best Pumpkin Pie Recipes! Looking for more? Check out these other culinary experiments from Book Riot: