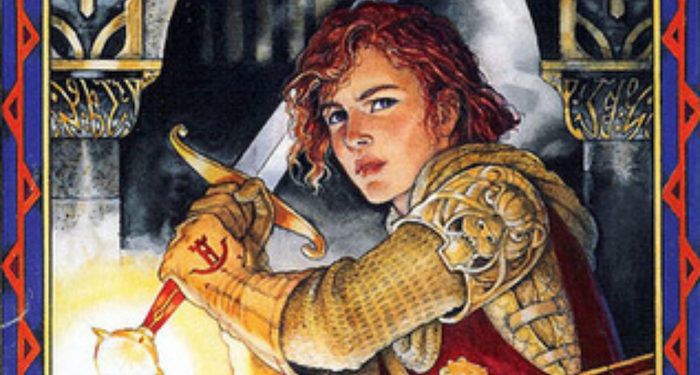 I recently started a reread of Tamora Pierce’s Song of the Lioness books for the second time in less than six months without realizing it. This is unusual for me, because I am not much of a rereader, so I began to examine why I keep coming back to the story of a girl who will stops at nothing to become a knight in a country that doesn’t believe that that’s something a woman should do. Like most of us, I’m going through a period of change, and Alanna reminds me of the value of perseverance.

Alanna of Trebond and I have a long history. I’m not alone, of course: there is more than one generation of people who were partially raised by Tamora Pierce. My mother bought me Alanna: The First Adventure when I was 11 or 12 years old because it had a horse on the cover. I was a voracious reader but was not inclined toward fantasy, so I was initially skeptical. The fantasy stories I had been exposed to up to that point felt humorless. Alanna changed my mind. I was fully invested in her story and in the country of Tortall. I remember thinking that I wanted to write books like these someday.

Years and years passed, and I discovered all of the ways life can distract a person from writing. Before March of 2020, I had fallen into a routine of getting up early and putting in some time writing before I left the house for work. There wasn’t much of a point in doing that when I never actually left the house. I’d get around to it eventually, right? (Wrong.) Add in a new baby, and my writing life, never what you’d call robust, was on life support. While listening to Alanna’s story while doing the dishes that were forever piling up, I remembered I would never be all of the things I wanted to be without putting in the work.

Honestly, what is more “making things happen for yourself” than cutting your hair and taking your brother’s place as a page? I am not in any conceivable way a morning person, but I knew what I had to do. Listening to Alanna and her quest to become a knight as I was doing all of the washing of things that comes into your life when you have a baby reminded me that hard work is worthy work. I think about Alanna most days as I drag myself out of bed before the sun comes up. Hard work is worth it even when no one is watching. In the last year, Alanna has kept me company through everything from long-put-off dental work to endless hours of washing and sanitizing baby items.

I have always been the kind of person who likes to be good at things and avoids the things that she is not automatically good at. In my latest reread, I took particular note that Alanna is not good at all of the “fighting arts.” She is not a natural swordsperson, as one would expect an aspiring knight to be. She reminds me that you don’t have to be the best at something right away: that’s where the hard work comes in, and it’s more meaningful when you feel yourself getting better. That’s why Alanna practiced with a sword that is too heavy for her. That is why I can’t just sit on the couch and stare at the wall instead of getting to work.

Pierce’s characters are not eternal children, which makes it easier to want to be an adult. In addition to some of the other life adjustments I’ve mentioned, I am also adjusting to returning to in-office work as a working mother. In Pierce’s later series, I got to see Alanna as the King’s Champion and the mother of three children. I’ve always known that I can have both because Tamora Pierce said so. It may not be easy, but if Alanna can do it, so can I.

Alanna is not my only Tortall role model. I’ve also reread The Immortals and Protector of the Small several times as an adult. They have all been important to me at different times in my life. I was surprised by how much Kel felt relevant to my early working life, even as a woman in a traditionally “feminine” job (I was an executive assistant). I even tried her mantra I am stone at various times in my life but it rarely worked out for me because I am marshmallow.

Alanna has seen me through adolescence and has continued to see me through adulthood and, most recently, parenthood. At age 12 I was taken with Alanna’s purple eyes, animal companions, and magical gift. As an adult, I’ve found different things to admire: her bravery, her perseverance, and her dedication to her craft. As a character in a later Pierce series remarks when talking about Alanna, “It isn’t just children who need heroes.”