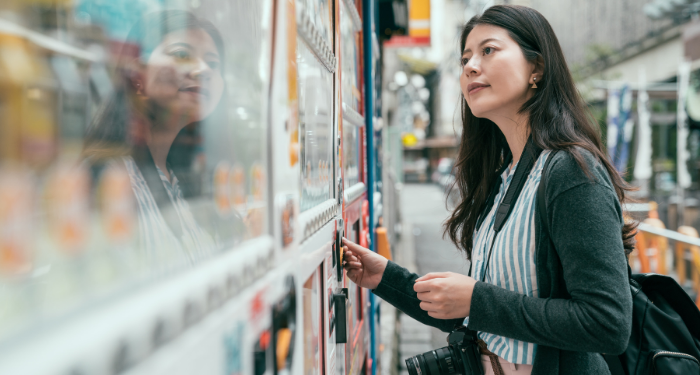 I never thought my love of libraries would be a potential health hazard. Yet, since 2020, the pandemic has introduced a whole new risk calculus. Now, every time I consult my library TBR, I have to wonder, is browsing for books worth potential exposure to COVID-19?  While readers like me face this dilemma, library systems around the world are reevaluating what services look like post-COVID. Faced with a public health crisis as well as shrinking funding for libraries, towns and cities have debated the role, necessity, and even the sustainability of library services.

To address these questions, librarians around the world are betting that one part of the library of the future looks like a cross between a package pick-up locker and a deluxe snack vending machine, AKA automated library vending machines (ALVM’s). From Poland to California, ALVMs are expanding access to library services in a time when patronizing and staffing a physical library can be both a health risk and time-luxury that many people cannot afford.

As we’ve noted here on Book Riot, book vending machines have been around for a surprisingly long time (1822!). While the idea is centuries old, Polish cities were among the first localities to think about book vending machines as a pandemic solution. As reported in First News, Paweł Braun, the director of the City Library in Łódz, said: “We wanted to reach an even wider audience than before, and realized that [ALVMs] would not limit readers by either its opening times nor the restrictions that had arisen because of the pandemic.”

Dubbed książkomats, the Polish book dispensers, which look a little like Amazon package lockers, are sleek metal machines with a grid of compartments for books and a glowing digital display. To retrieve a book, a patron swipes their card and interacts with the digital display. the first versions were designed for book browsing, with windows that showcased each book spine in its numbered compartment. However, the most popular versions of the machines are essentially sophisticated pick up boxes. These models allow library cardholders to place a hold on a book online and have it delivered to their preferred locker. The system then emails the borrower when the book is ready to pick up.

While those steps may be familiar to anyone who’s ever put  a book on hold at a physical library branch, the ability to access the library without actually going inside is game changing  for many individuals. First News cites one Polish city as calling the machines “a perfect solution for busy and overworked people who lack the time to visit the library during normal working hours,” as well as people who may not feel comfortable in a crowded physical space.

The idea for automated library vending machines has gained traction in the United States as well. In Franklin County, Virginia, the new 24-hour library is a book vending machine surrounded by a glass shelter and located in an office park. In a press release, Franklin County library director Alison Barry said: “the COVID-19 pandemic reinforced our responsibility to continue to serve county residents who don’t have internet access or are unable to visit our physical buildings. Now people have access to library materials around the clock.” The kiosk holds 235 books, audio books, and DVDs available for check out. It also offers Wi-Fi so that library card holders can download digital ebooks and audiobooks.

Even before cities turned to ALVMs as a pandemic solution, libraries around the world were investing in the systems as alternatives to physical libraries. In Aberdeenshire, a rural area in Scotland, the library system decided to use an ALVM as a temporary solution while a physical branch closed for renovations in 2017. Adorably named “the Smallest Branch,” the book vending kiosk was placed in a community center. Judging from a 2019 YouTube video, the Smallest Branches are here to stay in Aberdeenshire.

Since ALVM’s can be placed anywhere that has access to electricity, they are a valuable tool for increasing access to library services. While some libraries choose to place ALVMs outside or near physical branches, others have gotten creative with the machine placement. Toronto, Fullerton (outside Los Angeles) and Anaheim are just a few of the cities that have placed library vending machines in transit centers. They can also be easily placed in community centers, malls, or housing complexes. By placing machines in high-traffic areas, the libraries aim to make book borrowing as easy as possible, allowing readers to pick up a new novel on their way to work or school.

ALVMs also expand library services into “book deserts” or areas that are currently underserved by the library system. In some ways, the ALVM is a high tech version of the bookmobiles that have been bringing books to underserved areas for centuries (though with less whimsy and charm).

ALVMs are also an attractive option for library systems with stressed budgets. The popular Envisionware “24-hour Libraries” machines cost around $150,000. While not a small fee, that’s a tiny amount compared to cost of a brick and mortar location. The TC Palm detailed one Florida County’s calculus when it chose an ALVM in 2020. The county wanted to expand library services into a growing residential area. According to the reporting, a physical library building “could cost $8 million, plus the additional cost to staff the library,” so the county invested in an ALVM for $166,770 instead. The machine they chose stores about 340 items and can serve six to eight patrons simultaneously by having multiple displays. Like many other ALVMs, it is available 24/7.

The Cons: Libraries Without Librarians?

While automated library vending machines are an innovative way to increase library access, they cannot replace all the benefits of a physical library. Libraries are often community hubs that provide gathering spaces, working areas, and free educational programming for kids and adults. They can benefit the surrounding neighborhood and offer opportunities for beautiful, accessible architecture.  Obviously, an ALVM is not designed to match those amenities. When library systems choose to address book deserts with these machines, they are only bringing a portion of library services to the neighborhood.

Additionally, physical libraries are staffed by real human librarians who help connect readers with books and services. ALVMs are unstaffed, which means lower overhead but also fewer library jobs for librarians and fewer interactions with professional bibliophiles for the public. While many librarians were rightly angry over the risks forced upon them by COVID, libraries without librarians are a dark future indeed.

The Future is Hybrid

With the ability to increase access at reduced cost, library book vending machines seem destined to expand. Hopefully they will be used as part of a hybrid automated/staffed approach that gives library patrons the best of both worlds: 24/7 access to physical books and comprehensive digital catalogs as well as access to physical library spaces. Whatever the future holds, if more readers get more access to books, it’s a win.